SUNCHEON, South Jeolla Province -- Some 200 participants representing South Korea and the 10 member countries of the Association of Southeast Asian Nations gathered at the lobby of Paradise Hotel, Busan, in the early morning of Thursday beaming with excitement about the second day of the three-day train trip across the country ahead of the ASEAN-Korea special summit in November.

After a jam-packed day of a six-hour train ride, a visit to the temple Bulguksa, which is a UNESCO World Heritage Site located in Gyeongju, North Gyeongsang Province, and a two-hour bus ride to Busan the day before, capped with a welcoming dinner, participants were ready to hit the road on the second day.

“I love this event, it’s amazing. It’s a slow train, so I can actually see the view. Inside the train there are a lot of Asian performances. It feels like I’m seeing Korea and Asia all at once,” Nur Atiqah Raduan, 29, a Ph.D. student from Brunei studying vocational studies at Seoul National University, told The Korea Herald at the Suncheon Bay Wetland Reserve in South Jeolla Province. Suncheon Bay Wetland Reserve is one of the five largest wetlands in the world. 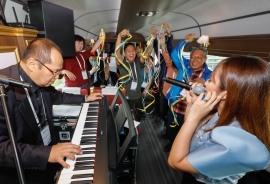 “I’m very optimistic about the ASEAN and Korea relationship. I realize that recently there’s a lot of interest around Korea and Asian countries have always been interested in Korea. I think it can go forward not just for 30 years, probably more than 50 years from now,” she added.

The journey, “ASEAN-Korea Train: Advancing Together,” during Oct. 16-18, was arranged by the ASEAN-Korea Center in the run-up to two summits in Busan next month, inviting roughly 140 government representatives, businesspeople, academics, artists, media professionals and young people from ASEAN countries and 60 representatives from South Korea.

The ASEAN-Korea Center is an intergovernmental organization that promotes economic and socio-cultural cooperation between ASEAN and Korea.

This year also marks the 30 anniversary since South Korea and ASEAN initiated a dialogue partnership in 1989. Over the years, the ties have morphed to becoming crucial partners for peace, trade and cultural exchanges.

The program celebrated people, prosperity and peace -- the “3 P’s” of the New Southern Policy -- and the trip consisted of stops to Bulguksa, Busan, Suncheon Bay Wetland Reserve and the Asia Culture Center in Gwangju. 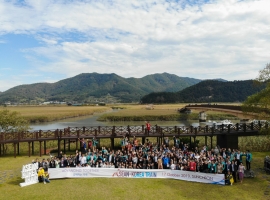 ASEAN-Korea Train delegates take part in a group photo at the Suncheon Bay Wetland Reserve on the second day of the three-day event Thursday. (ASEAN-Korea Center)

Of the seven-car train that had been custom-fitted for the journey, participants were assigned to car trains Nos. 2-6, which were filled with performances by artists and networking opportunities, while car train No. 1 was used for on-train interviews.

“This program is so exciting and full of happiness. On train artists from various countries offer entertainment. The event is heartwarming and I feel familiar with ASEAN and Korea. It’s great,” Sue Sha Shinn Thant, 24, from Myanmar, told The Korea Herald.

Sue Sha Shinn Thant joined the program as the regional youth representative of the Mandalay Regional Youth Affairs Committee. She is also a central board executive at Myanmar’s LGBT Rights Network.

“Korea is a developed country in Asia. I like the infrastructure (here) including bridges and trains which are more advanced than Myanmar. … Thank you for inviting me to the ASEAN-Korea train program. I hope ASEAN and Korea become more familiar and successful in the future,” she said.

South Korea is zeroing in on its relations with ASEAN countries to diversify its key partners, driven by South Korean President Moon Jae-in’s signature New Southern Policy introduced in 2017.

Indicative of South Korea’s emphasis on ASEAN, a special summit between Korea and the 10 countries is to be held in Busan next month upon President Moon’s proposal, followed by the Korea-Mekong summit.

“This tour is very important for me. It’s an opportunity to meet friends from different countries to learn their culture,” Pham Thi My Hanh, 28, a Vietnamese student studying at Incheon National University, told The Korea Herald.

“I want to live in Korea for the next five to seven years. Currently I am actively trying to observe Korean culture,” she added.