The wife of former Justice Minister Cho Kuk left the prosecutors’ office around midnight on Wednesday after being questioned over allegations that she forged a document and managed a dubious private equity fund.

It was the sixth time prosecutors summoned Chung Kyung-shim, a professor at Dongyang University, for interrogation. She was questioned Oct. 3, 5, 8, 12 and 14.

Chung’s lawyers said Tuesday that Chung has been diagnosed with a brain tumor and a cerebral infarction, or stroke. The medical certificate they submitted to the prosecution, however, is missing the name of the doctor who diagnosed her and the name of the medical institution. 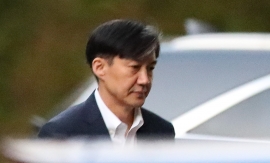 Prosecutors have requested more information from Chung to confirm the diagnosis.

Chung has been indicted on charges of fabricating a college award that was used for her daughter’s medical school application, and is suspected of running a shady private equity fund that her family invested in. Cho’s cousin once removed, who ran the fund, has been detained and indicted on charges including embezzlement, and prosecutors suspect that Chung conspired with him.

After arriving at the Seoul Central District Prosecutors’ Office at around 1:10 p.m. on Wednesday, Chung went over the report detailing her previous interrogation, and was questioned as a suspect before returning home around midnight.

On Oct. 14, during her fifth round of questioning, she asked the prosecution to suspend the investigation, citing health reasons, after hearing the news that her husband had resigned.

Prosecutors said the medical certificate they received from Chung lacked the name and license number of a doctor, the name of a medical institution and an official seal.

The prosecution has requested that information, as well as Chung’s MRI test results and a radiology report.

Chung’s lawyers said in a statement that they had already explained to the prosecution why they had chosen not to disclose the name of the hospital -- to avoid causing problems for the hospital and the other patients.

The medical certificate stated that she was receiving treatment in the hospital’s orthopedics department, and her lawyers said it was one of several departments treating her as she was suffering from a number of illnesses.

The prosecution plans to proceed with the investigation into Chung and decide whether to request a warrant to detain her.