It was a de facto defeat for South Korea.

In a men’s World Cup qualifier match held Tuesday in Pyongyang, world No. 37 South Korea failed to score a single goal against North Korea, No. 113, even with Tottenham Hotspur star Son Heung-min leading the charge.

It was the first inter-Korean home game for North Korea in almost three decades, since the two Koreas played each other in 1990. 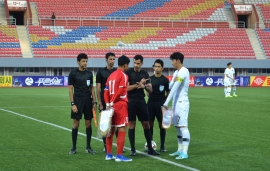 South Koreans couldn’t watch the Tuesday match or cheer for their team in real time, as North Korea allowed no spectators, live broadcasts or news media, only promising to deliver a DVD with the match footage.

Pyongyang’s gesture infuriated South Korean fans and dismayed FIFA President Gianni Infantino, who, along with a few foreign diplomats posted in Pyongyang, attended the match at the Kim Il-sung Stadium.

“I was looking forward to seeing a full stadium for such a historic match but was disappointed to see there were no fans in the stands,” said Infantino.

He added that he was surprised by some of the issues that arose, such as the impossibility of live broadcasting the event and problems with visas and access for foreign reporters.

An official at the Korea Football Association said, “The no-spectator match wasn’t consulted earlier with the Asian Football Confederation. As the host, North Korea has the rights to sell tickets to the stadium, and the AFC cannot raise issues with that.”

Some South Koreans blamed government indecision for what the BBC called “the world’s strangest football derby.”

“The match is the first of its kind held in Pyongyang, but no South Korean cheering squads or press could be there. What exchange or cooperation is the South Korean government really overseeing?” said Kim Hack-yong, a main opposition Liberty Korea Party lawmaker.

Baek Seung-joo, another Liberty Korea Party lawmaker on the National Defense Committee, stepped up the rhetoric, saying “the Moon administration should realize what we see today is the very inter-Korean relations at face value.”

Tuesday’s match came amid rocky relations between Seoul and Pyongyang.

The two Koreas have not engaged much since US President Donald Trump and North Korean leader Kim Jong-un failed to see eye to eye on a denuclearization deal at their summit in Hanoi in February.

A series of missile launches by the North after the failed summit have placed the two Koreas increasingly at odds, and the North continues to criticize the South for conducting its annual joint military exercise with the US.

“It may just as well be that Seoul had sought ways to make the game more accessible, but Pyongyang just didn’t come to terms, out of fears of a humiliating defeat at home,” said Koh Yu-hwan, a professor of North Korean studies at Dongguk University in Seoul.

The professor said the mending of ties between the two Koreas hinges on US-North Korea relations.

“Unless we see a major breakthrough between the United States and North Korea on the denuclearization talks by the end of this year, the inter-Korean relations are unlikely to hit a new high in the near future.”