Amid the continuing work-to-rule campaign, demanding improvement in working conditions and the wage system, which began Monday, the unionized railway laborers reaffirmed their plan to hold an all-out strike.

The Korean Railway Workers’ Union will embark on a 72-hour strike starting 9 a.m. Friday, the organization said during a press conference Tuesday. 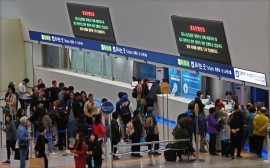 The union has been staging protests requesting the normalization of salaries, shorter working hours, increase in number of employees and improvement in the affiliate companies’ working conditions.

Out of the total 19,000 union members, over 10,000 -- except for the essential services maintenance workforce -- will take part in the strike.

Passenger trains departing from Seoul and Yongsan stations have been experiencing delays of 10-90 minutes since Monday due the work-to-rule campaign, and the upcoming strike is expected to cause further disruption in train schedules. According to the Ministry of Land, Infrastructure and Transport, only 88 percent of the subways in the metropolitan area and 81 percent of high-speed trains are expected to run during the strike.

The state-owned train operator company Korail has launched an emergency headquarters in response to the union’s protests, deploying extra staff and refunding tickets for delayed trains. Reservations for train tickets may be limited until Monday morning.