Chamber music ensemble Trio Owon is celebrating its 10th anniversary with the recent release of a new album of Russian elegies.

Philip Bullock, a professor of Russian literature and music at the University of Oxford in England, advised the trio on working up its repertoire.

“At a music festival held last year, I realized it is time to do Tchaikovsky. But it is not easy to work up a repertoire including Tchaikovsky’s music. That is where Weinberg comes in,” cellist Yang said at a press event Monday at a concert hall in Hannam-dong, central Seoul. 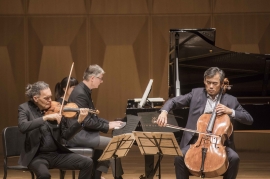 “Weinberg is an amazing composer who has not been fully appreciated yet,” he said. “We included Shostakovich’s music as he was close with Weinberg. He was an important figure in Weinberg’s life. The two had heavy impacts on each other’s music.”

Tchaikovsky’s Trio in A minor was written in memory of the composer’s close friend, Nikolai Rubinstein. Shostakovich dedicated Piano Trio No. 2 to his friend Ivan Sollertinsky, who passed away shortly before it was written.

Though Weinberg’s Piano Trio composition is not strictly an elegy, dedicated to his then-living wife, the composition was evoked from feelings about Weinberg’s late parents and family who were persecuted in the Holocaust, Yang said.

Yang went on to say that it is the trio’s responsibility -- as established classical musicians -- to be “beneficial” to others through music.

“Many ask us ‘Why do you practice classical music?’ When we present a composition by Weinberg, it is not just about one composer, but about a life of an era. Weinberg was a Jew born in Poland. His parents were killed during the Holocaust. He was lost. But invited by Shostakovich, he finally settled in Russia,” Yang said. 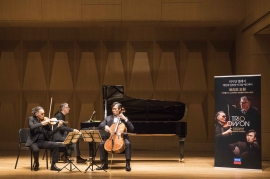 “This is not the life of just one person, but of the Jews at the time. It is an archive of emotions that cannot be explained in words. Music allows people to understand the emotions that humans cannot explain in words.”

Trio Owon was formed in 2009 by the three musicians from the Paris Conservatory. They named themselves after late-Joseon era painter Jang Seung-eop (1843–1897), whose penname was O-won, hoping to inherit his artistic sensibility.

“A trio is like a tripod. A person cannot pursue perfect music alone. We have to listen to others and complement each other,” Yang said. “We have known others for more than 30 years. Being a trio has helped us to be better in many ways, allowing us to grow deeper roots in music.”

“We do not look for our own music. We are always working on discarding our colors. It is important to avoid having a specific attitude towards compositions, we should rather find the soul in them.”