Country may have to brace for strongest typhoon this year

Typhoon Hagibis, which is rapidly gaining strength, is forecast to batter Japan and potentially impact South Korea over the weekend, the weather agency said Monday.

The typhoon originated 1,450 kilometers east of Guam in the western Pacific Ocean around 3 a.m. Sunday. It has been spotted moving west-northwestward at 26 kilometers per hour in waters some 430 kilometers from Guam, according to the Korea Meteorological Agency. 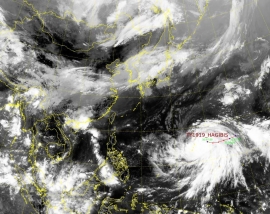 The midsize storm has a central pressure of 945 hectopascals, a maximum wind speed of 45 meters per second and a wind radius of 400 kilometers.

Hagibis is intensifying faster than initially expected, and its strength level has been moved up from “strong” to “very-strong” over course of the day. The weather agency anticipates its maximum speed to reach 55 meters per second and its wind radius to measure up to 450 kilometers by Wednesday. It will likely maintain similar strength until the weekend.

Although Hagibis’ exact path is uncertain, the possibility of the typhoon making landfall in South Korea cannot be ruled out.

Hagibis -- forecast to become the strongest storm to approach the Korean Peninsula -- is currently forecast to hit mainland Japan over the weekend. It is projected to arrive some 540 kilometers east of Okinawa as early as Friday afternoon and make a northwestward turn toward Kyushu.

“There is a possibility that the typhoon will avoid hitting South Korea and pass over the East Sea due to the influence of the cold atmospheric pressure surrounding the country,” an official from the weather agency said. Given the expected path and strength of the typhoon, some of Korea’s eastern coastal regions may be affected when it hits Japan.

The official said the storm’s path is expected to become clearer later this week.

If it does make landfall here, Hagibis will be Korea’s eighth typhoon in 2019 -- the greatest number of typhoons here in a year since 1959.