Head shaving has cultural history, but may lack significance in modern era

The leader of the main opposition Liberty Korea Party had his head shaved Monday in front of Cheong Wa Dae, calling for the resignation of the justice minister, whose family has been implicated in corruption allegations. 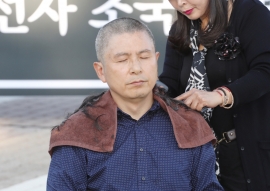 Hwang Kyo-ahn, chairman of the main opposition Liberty Korea Party, has his hair shaved at a plaza in front of Cheong Wa Dae in Seoul on Monday, calling for the resignation of Justice Minister Cho Kuk (Yonhap)

Korean politicians sometimes have their heads shaved in public as an aggressive means of visually delivering a message about a political or social issue. This expression of resistance apparently has its roots in the country’s Confucian culture.

“According to Confucianism, which emphasizes filial piety, damaging any part of your body, including the hair, gifted by our parents, is an unforgivable disrespect,” cultural critic Kim Sung-soo said.

“Hence, shaving the head would imply one’s determination on a matter almost worth risking one’s life.”

Regardless of the cultural significance, many question the real intentions behind the politicians’ act.

“Shaving one’s head may be visually shocking, but I doubt the public would be persuaded by it,” said Choi Chang-ryul, a politics professor at Yongin University.

“Shaving does not require any self-sacrifice or endurance of pain and hence cannot be seen as a demonstration of determination. 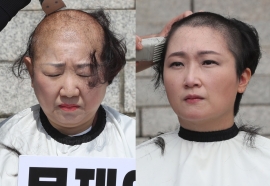 “In order for Hwang’s shaving performance to be effective in changing the people’s opinion, the Liberty Korea Party must make efforts to overcome the hostility -- stemming from the former administration and numerous political scandals surrounding the party -- that some of the public still has toward them,” Choi suggested.

Kim So-ra, a 27-year old passerby who witnessed Hwang having his head shaved, also perceived the event as mere spectacle.

“I don’t think Hwang is much different from other politicians in the past who shaved their heads but never did anything more,” Kim said. “I think it’s an act put up to reinforce the resolution shared inside the party and among their supporters.”

Cultural critic Kim Sung-soo shared some insights about the significance of head shaving as a form of protest.

“In the past, when our ancestors fought for independence and democracy, head-shaving was done by social minorities who had no power to do anything except mar their bodies as an expression of dissent,” Kim said.

“Politicians, such as Hwang, are not minorities in this society. It could even be seen as an insult to the powerless to see these authorities shave their heads as if to put on a show.”

While many people have denounced the lawmakers’ actions as reckless and pretentious, some defended the Liberty Korea Party, saying it is the last resort for the opposition now.

“It is the first time in history that the leader of the main opposition had his head shaved publicly,” Myongji University professor Shin Yul said.

“Politics in South Korea has been damaged seriously by the administration and the ruling party pushing ahead with Cho’s ministerial appointment and the opposition committed this extreme act in order to get their voices heard.”

(Shot and edited by Choi Ji-won /The Korea Herald)