Japanese Foreign Minister Kono Taro has criticized the South Korean government for having “unilaterally abrogated” a treaty signed by the two countries, arguing that a lack of trust led to their bilateral relations plummeting. Japan claims that the 1965 treaty that normalized ties between the two countries settled the issue of Tokyo’s forced labor mobilization of Korean nationals during the colonial period.

“The heart of the problem is whether the promises made between our two sovereign states when they decided to normalize their relations in 1965 will be kept or not,” he said in an opinion piece published by Bloomberg on Wednesday. 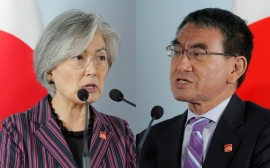 Kono reiterated the country’s position that all issues concerning claims between the two countries and their nationals were “settled completely and finally” by the 1965 agreement in which Japan extended $500 million in grants and loans.

“If an international agreement can be broken because of the domestic circumstances of one country, we will never be able to maintain stable international relations,” he said.

He blamed the Korean government for failing to handle Seoul’s Supreme Court’s rulings last year that ordered Japanese companies to compensate Korean victims, despite its repeated requests for diplomatic consultations to resolve the issue.

Following the top court’s ruling, Tokyo wanted to settle the row through arbitration, while Seoul proposed that the two countries’ companies create a joint fund to compensate victims of forced labor. The two countries did not accept the respective suggestions.

In 2018, Seoul’s Supreme Court ruled that the state-to-state treaty does not cover the right of victims to claim compensation for crimes against humanity committed by Japanese firms in direct connection with the Japanese government’s illegal colonial rule and war of aggression against the Korean Peninsula.

In a recent interview with BBC, Korean Foreign Minister Kang Kyung-wha said the country doesn’t intend to break the 1965 treaty or to demand a renegotiation.

“What the court judgment has said is that (in) the context of illegal occupation in the colonial rule and the war of aggression, illegal acts directly connected to the context have not been covered by the 1965 agreement,” she said, adding that Japan has changed its tune in recent years from its position in the 1990s that indicated that individual rights to claim compensation have not been extinguished.

Following the last year’s ruling, a group of some 100 Japanese lawyer and law scholars called on the Japanese government to recognize its responsibility to resolve the issue of forced labor and to help companies admit their human rights violations during World War II and offer apology and compensation to victims.

In his Bloomberg contribution, Kono denied that Japan took a retaliatory action against the Supreme Court ruling by slapping export curbs on Korea, calling them “completely separate issues” and saying that the decision was made for the sake of its national security.

“I would like to reiterate that this issue has nothing to do with the recent update by Japan of its export control measures, which was required to ensure the non-proliferation of weapons-related materials,” he said.

Starting on July 4, Japan imposed restrictions on exports to Korea of three key materials needed for producing semiconductors and displays, crucial products for the country.

Another measure putting Seoul under pressure is Japan’s removal of Korea from its whitelist of trusted trading partners that went into effect Aug. 27. Seoul is planning to remove Japan’s preferential trade partner status this month, which Japan claims is “groundless retaliation.”

Regarding Seoul’s announcement that it would not renew a military intelligence sharing pact with Tokyo, Kono said the decision “reflects a total misapprehension of the security situation in Northeast Asia.”