SEJONG -- The 2020 general election for South Korea’s next National Assembly is coming in about 200 days.

A core issue is whether the ruling Democratic Party of Korea will continue to secure its dominance in support ratings over the main opposition Liberty Korea Party.

The Democratic Party has yet to yield its leading position in approval ratings among the people since President Moon-Jae-in took office in May 2017.

But symptoms of situation change have emerged over the past few months amid sagging economic indices and growing disappointment in diplomatic affairs and North Korean policies.

Further, the scandals surrounding Justice Minister nominee Cho Kuk -- involving his daughter’s university admission and his family’s private equity funds -- has been a recent risk factor for the ruling party. 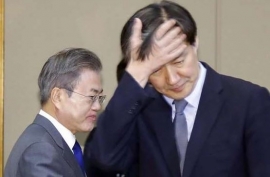 Public opinion from some pollsters showed that the gap in support between the two rival parties has narrowed precipitously since the scandal aroused public fury in August. Cho Kuk is a close political ally of President Moon.

According to a survey by the Opinion Research Justice, unveiled on Aug. 29, the support ratings gap between the two parties has narrowed to 4 percentage points -- 36.4 percent for the Democratic Party and 32.4 for the Liberty Korea Party.

By region, the ruling party was overtaken by the opposition in Sejong-Daejeon-Chungcheong provinces (31.8 percent vs. 34.3 percent) and Jeju-Gangwon (29.5 percent vs. 30.3 percent).

While the ruling party also yielded to the opposition in Busan-Ulsan-South Gyeongsang Province and Daegu-North Gyeongsang, it maintained the lead in three regions -- Seoul, Gyeonggi-Incheon and Gwangju-Jeolla provinces.

Between 2017 and the first quarter of 2018, or during the first year of the Moon administration, the two parties posted a gap of 20 percentage points or more.

A poll by SA Consulting, which was unveiled on Aug. 30, represented that their gap was only 0.7 percentage point -- 32.6 percent vs. 31.9 percent -- marking the smallest disparity between the two parties. 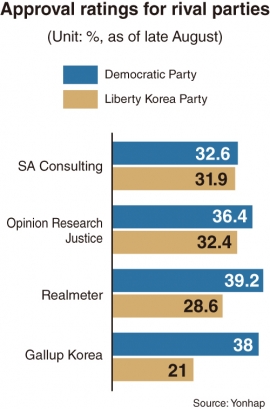 A noteworthy point is that the ruling party was outstripped by the opposition among men 32.4 percent to 33.4 percent. Ratings among women were 32.9 percent and 30.4 percent.

Further, the figures in Sejong-Daejeon-Chungcheong were 32.4 percent vs. 41.2 percent. The majority of people in the region voted for Moon in the 2017 presidential election and ruling party candidates in the 2018 local elections. But the poll result showed that they have shifted their support position.

The SA Consulting survey also showed that 60.4 percent of the 1,000 respondents opposed President Moon’s appointment of nominee Cho Kuk to the justice minister post. Only 35.4 percent were in support.

In contrast, polls by Realmeter and Gallup Korea indicated that the gap between the rival parties posted 10.6 and 17 percentage points, respectively.

Nonetheless, 57 percent of the 1,000 people surveyed by Gallup Korea responded that Cho was an inappropriate pick for minister. Only 27 percent supported the nominee. In particular, 63 percent of those in Seoul opposed his appointment.

The Seoul metropolitan area -- Seoul, Incheon and Gyeonggi Province -- has 122 district-based seats, 48.2 percent of the total 253. In the 2016 general election, the Democratic Party captured 82 of those seats, and the Liberty Korea Party (then the Saenuri Party) won 35 seats.

In addition, the Democratic Party took 12 seats in Sejong-Daejeon-Chungcheong and eight seats in traditionally conservative Busan-South Gyeongsang in the previous election for the incumbent 20th Assembly.

A political researcher has predicted that it would be hard for the ruling party to assert an overwhelming victory in the Seoul metropolitan and the Sejong-Chungcheong areas next year.

“Further, the sentiment at the current stage among Busan-Ulsan-South Gyeongsang residents is quite different from the 2017 presidential and the 2018 local elections,” he said.