With its own painful history of wartime sexual assault during the Japanese colonial era, South Korea’s efforts to protect women in armed conflicts is more compelling in the eyes of the world, the chair of the OECD’s Development Assistance Committee said.

“When we look at many conflicts across the world, women are being weaponized and gender-based violence is not declining,” committee Chair Susanna Moorehead said in a recent interview with The Korea Herald at the Foreign Ministry in Seoul. 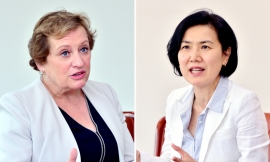 The OECD’s DAC is a forum for 30 donor countries that works for international development in accordance with international principles, rules and other standards. Korea joined the committee in 2009, becoming its 24th member.

“This is a fantastically important initiative and I think because of Korea’s own history in this regard, having Korea’s voice loud and clear on this is extremely persuasive,” she said.

The traumatic memories of the system of military sex slavery established by the Japanese Imperial Army during World War II still lingers here, with weekly protests calling on Japan to issue an official apology to the victims and offer proper restitution. Only about 20 registered “comfort women,” a euphemism for sex slaves of the Japanese military during World War II, are still alive in South Korea and most are in their 90s.

“We have a moral obligation and political will to focus on this issue and to turn the history of our experiences into lessons of history,” Oh said.

As part of this initiative, in July the government held the first international conference in Asia to focus on women, peace and security. It also provided $8 million to support projects in response to sexual violence in conflict situations.

Moorehead, a former UK ambassador who assumed her current role in February, has identified gender equality in the area of overseas development assistance, or ODA, as a priority.

Despite overwhelming evidence that societies where there is greater gender equality are also far better at integrating marginalized groups, resulting in a virtuous cycle, the international community is falling behind on its commitments.

“Many poor countries continue to discriminate against women and girls in many overt and covert ways. And many development programs don’t pay special attention to the fact that women and girls are not necessarily benefiting from interventions,” she said.

In July, the OECD’s DAC adopted the first international legal standard to prevent sexual abuse and exploitation in the development sector.

The set of recommendations agreed on by the organization’s members came in the wake of a sexual misconduct scandal involving dozens of Oxfam aid workers who, while serving in Haiti as part of the humanitarian response to the 2010 earthquake, paid survivors for sex or sexually abused them.

“I don’t think we should be naive about this, this is not going to transform the way that individuals behave overnight,” Moorehead said.

“But over time, greater scrutiny, greater transparency, greater accountability, a victim-centered approach, that means that we focus on those who are being targeted. This will make individual perpetrators realize that this is unacceptable and there will be consequences.”