If timing is all important in stage drama, there will be no margin for error in the Gwangju Performance Project’s next production.

If timing is all important in stage drama, there will be no margin for error in the Gwangju Performance Project’s next production.

Twelve groups will storm through as many plays in two hours as they compete to win Pen in Ten.

“We have a great variety of plays this time,” said Kelly Kim, one of the organizers of the competition. “There are comedies, dramas, even a musical. We hope to make our audience laugh, then cry, then sing.”

But the GPP did not want to give more away, saying surprises were part of the fun.

“I think the whole concept of a 10 minute-play festival works best when the audience doesn’t really know what to expect,” explained Robyn Bramwell, who organizes the event with Kim. 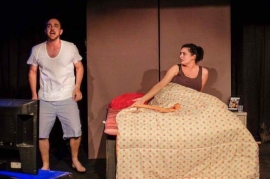 A scene from the Gwangju Performance Project’s last Pen in Ten performance in 2016. (GPP)

And this kind of event helps people get involved with productions, from writers and actors to set-builders and people in organizational roles. There is also some audience participation, through a “people’s choice” award.

“The idea to do Pen In Ten in 2016 came out of our need to get more people from the community involved with our organization. Many of the people who participated in 2016 and this year are getting involved with the GPP for the first time,” Bramwell said.

“The competition sparks a lot of creativity among the community and we were surprised again by the amount of interest. With our other productions, it’s our GPP Players who are mainly deciding those things. It’s amazing what happens when people have complete artistic freedom. Anything could happen.”

The scripts are chosen based on a set of criteria, with names removed from the scripts to head off personal bias.

“We look for an original concept, good character development and interesting dialogue,” Kim said. “We try to select plays that will be enjoyed by the audience.”

The number of plays has been reduced from 18 -- some felt it was overlong last time -- and this year will also involve teams from Seoul Players.

Beside the people’s choice award, there will be awards for best script, best staged production and best actor, decided by a panel of judges.