Firms such as Panasonic and NEC are focusing on grooming local workers in deep skills.

Brand-name Japanese companies which have operations in Singapore are rolling out programmes to groom Singaporean employees, in a nod to the Republic‘s reputation as a talent hub.

The likes of Panasonic, NEC and enterprise resource planning firm Works Applications from Japan are focusing on grooming Singapore talent in deep skills, be it through student internships or management trainee programmes. 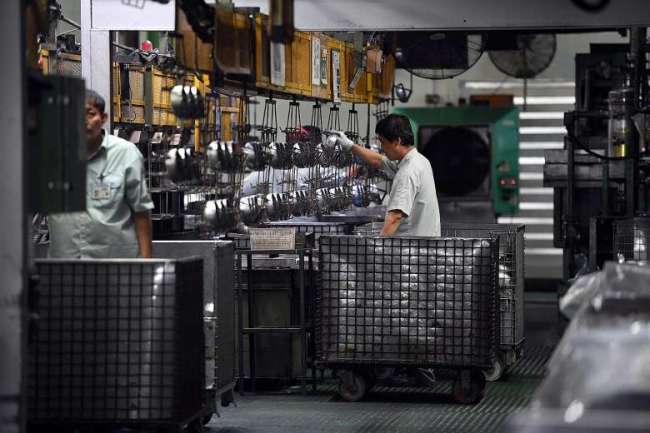 Workers at Panasonic‘s refrigerator compressor factory in Bedok The Straits Times
Last month, Panasonic moved its refrigeration compression business unit to Singapore, home to its biggest compressor-manufacturing site, so as to streamline processes and groom the local talent pool.

Works Applications, which runs a 400-man research and development outfit in Singapore, will launch formal internships in collaboration with five local universities, with a program for mid-career professionals also in the works.

Amid reports of an acute skills shortage in the information and communications technology sector in Singapore, especially for programmers and coders, a Works spokesman said it will provide on-the-job training to groom local talent.

Lim Swee Nian, assistant managing director of the Economic Development Board (EDB), told The Straits Times: “As one of Singapore’s top three investors since our independence, Japan continues to leverage Singapore‘s position as Asia’s leading talent hub, transferring valuable industrial knowledge and management skillsets through the creation of good jobs.”

Panasonic said moving its refrigeration unit to Singapore will allow it to more effectively meet growing demand in Asia and streamline decision-making. Its Singapore unit will also move towards becoming a “smart factory” using technologies like big data, through which Singaporeans, too, will stand to benefit.

“Singapore is a conducive country for research and development (R&D), having many public research institutions and world-renowned universities to tap from, and there is definitely no shortage of talent,” a spokesman said.

Technology firm NEC, whose Asia-Pacific division is headquartered in Singapore, launched a two-year talent-development program last year. It has hired nine trainees and looks to recruit up to 26 trainees by next year.

It has also partnered EDB on a year-long cyber-security training program. Ten cyber-security engineers have been hired after being trained in areas such as digital forensics and malware analysis.

An NEC spokesman said Singapore‘s support for innovation and its Smart Nation drive were factors that led NEC to set up an R&D laboratory in the Republic, which also houses its first Global Safety Division outside Japan.

Mitsui Chemicals, whose Asia-Pacific division is also headquartered in Singapore, has been awarding scholarships and internships since 2012 to polytechnic students, who can join the company as technicians upon graduation.

The companies join the Singapore arm of games-developer Koei Tecmo, which has trained more than 200 people since it opened in 2002, senior vice-president Raymond Wong said.

“Even those who have left the studio have gone on to become leaders or managers in other companies, while some have become teachers in games development, completing the circle of talent development,” he told The Straits Times. “The program aims to create a workforce that is equivalent to, if not better than, the Japan team and equally capable of making successful products for a worldwide audience.”

EDB’s Lim said: “In today‘s digital age, opportunities lie in areas such as process automation, robotics design and IoT (Internet of Things) fields that Japan is a global leader in. This will, in turn, inspire young Singaporeans and support our drive to build an innovation-led economy.”