KOTA KINABALU, Malaysia (The Star) -- Photos of shark hunting and finning in Sabah, known as a dive paradise for its idyllic islands, that surfaced on socail media have led to renewed calls for an industry ban.

Yet another picture has emerged of shark hunting and finning in Sabah, known as a dive paradise for its idyllic islands. 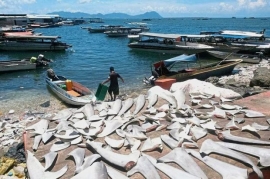 A fisherman lays out shark fins and tails at the Semporna jetty in Sabah. The Star

The Danau Girang Field Centre has put up a picture of rows of shark fins being laid out to dry on a jetty in the state’s east coast of Semporna.

The picture, which has triggered dismay and shock among netizens, is stirring up fresh calls for a total ban on shark hunting in the state.

Many have expressed anger and disappointment that it is still legal to hunt sharks in Sabah.

Anti-shark hunting and finning activist Aderick Chong said it was shocking to see so many fins laid out openly in the district that was home to one of the world’s top diving spots.

“Some sharks can be hunted but there should be a ban on hunting certain species like the hammerhead and the stingray,” said Chong, who is heading the Sabah Shark Protection Association.

“[But then] if the state government only bans the capture and killing of certain types of sharks, it will be difficult to identify which species the fins belong to,” he said.

The fishermen, said Chong, claimed that the sharks sold at the markets were from their catch that was part of their livelihood and not hunted.

“(But) why do they need to fin the fish and sell the body separately? This clearly shows that the shark fin trade is real and continues to exist in Sabah,” he said.

Chong said although there were some positive moves during a public consultation for the inclusion of several sharks and stingray species in Sabah’s protection list, this would be pointless if there were no strict rules.

“Sharks will disappear from our seas.
“As it is, sharks are already so hard to find in our dive sites,” he said.

In July last year, pictures of sharks being finned and slaughtered in the diving haven of Pulau Mabul near Sipadan went viral on the Internet.
The images were also featured on the Facebook page of the US Embassy.

A few days after that, a group of tourists shared pictures of dead sharks laid out on a long boat with the tails of at least four hanging over the side.