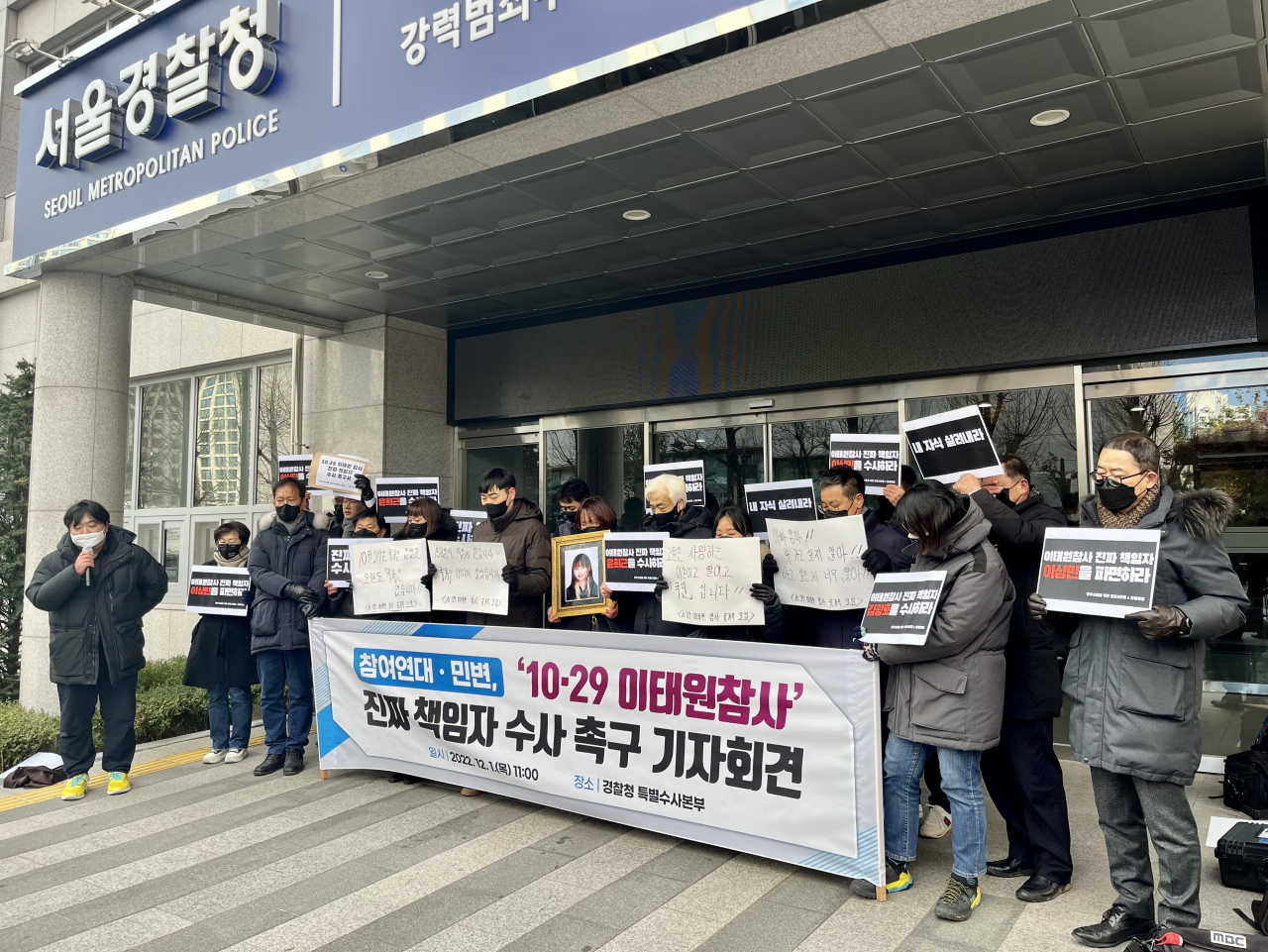 The bereaved families of the victims of the crowd crush in Seoul’s Itaewon last month speak outside the Seoul metropolitan police office on Thursday. The man speaking with a microphone (farthest left) is Suh Chae-wan, one of the lawyers at Minbyun working with the families. (Kim Arin/The Korea Herald)

The bereaved families of the victims of the deadly crowd crush in Seoul’s Itaewon last month called the firing of Lee Sang-min, the minister of interior and safety, who has yet refused to resign.

In a press conference held outside the Seoul Metropolitan Police’s office, the mother of late Lee Ji-han, 24, said that the ongoing investigation by the police “should not spare those in high offices.”

“But in order for that to be possible, the safety minister needs to be removed from his position. Because he has powers over the appointment of senior-level police,” she said.

“It’s been a month since my son, Ji-han, passed in the middle of Seoul. It feels like it was only yesterday,” she said. “I was told to trust the police so I’ve waited. But now I’m seeing on the news that the police deleted records from the day.”

She said that she wished there was a way law enforcement overseas could be involved, as there were non-Korean nationals who lost their lives, so that the investigation would be more transparent.

Speaking on behalf of the families, she said that besides the safe minister, those who would be chiefly responsible in the government were Park Hee-young, the head of the district office of Yongsan, of which Itaewon is part, and Seoul Mayor Oh Se-hoon.

She also said that Ryu Mi-jin, an officer who was on duty at the Seoul police’s emergency dispatch center at the time of the incident, should be held responsible. Several calls for help from Itaewon were placed that night, but dispatches weren’t made in time.

But it was ultimately the police chiefs -- including Lim Im-jae of Yongsan district police, Kim Kwang-ho, head of Seoul Metropolitan Police and finally Yoon Hee-keun, the National Police Agency’s commissioner-general -- who should be held responsible.

Amid her speech, cries broke out among other parents who stood beside her. Some of them chanted, “Fire Lee Sang-min.”

Also speaking at the conference, the father of Lee Ji-han said that the president’s apparent show of support for the safety minister was “extremely disheartening.”

After returning from a trip to Southeast Asia on Nov. 16, Yoon was seen patting the safety minister on the back at the airport.

“What is that going to tell the investigators? That the president and the minister are good pals,” he said.

He added he has asked some lawyers who have offered to help “to stop talking to the press about government compensation.”

“That’s insulting to me. That’s not what we want. We don’t need that money,” he said. “We want punishment for people who were responsible.”

The parents met with members of the National Assembly later the same day, where they asked to be allowed a say throughout the parliamentary investigation that took off a week ago. They also asked for updates and explanations over the course of the investigation, which is set to last 45 days for now.

“I have so many questions,” the mother of Choi Min-suk, who was a sophomore in college, told lawmakers.

“I went to Itaewon to look for my son that night. I live nearby and I was able to get there fast. I saw no police there. I saw paramedics and ambulances but no police,” she said.

“It happened in Yongsan. What happened to the person in charge of the area? Are they held responsible?”

Lawmakers from the ruling People Power Party did not attend the meeting.