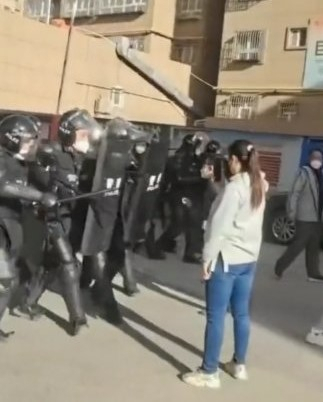 A woman is seen standing in front of police in a video. (Twitter @whyyoutouzhele)

Video footage of a woman standing against Chinese Public Security has been going viral on social media as “white paper protests” against China’s "Zero-COVID" policy spread across the country.

The video reportedly taken in Kashgar, Xinjiang province in China on Tuesday shows a woman in a white hoodie and jeans standing across from a line of riot police, appearing to record the police officers on her phone as they advance toward her.

She holds her ground as the officers advance. Police then take her phone by force and kick it away. Other officers shove her as she tries to pick up the phone. The video ends with the woman being pulled away by people in hazmat suits.

Some social media users have compared the woman to the “Tank Man” of Tiananmen Square, who became a symbol of China’s pro-democracy movement after his picture was taken by US journalist Charlie Cole during the Tiananmen Square protest in Beijing in 1989.

Protests where demonstrators hold blank pieces of paper -- indicative of the restrictions on their right to speech -- have taken place in at least 16 cities and at 50 universities in China. The Chinese government has indicated a strict response against protesters, placing armed police in affected cities.