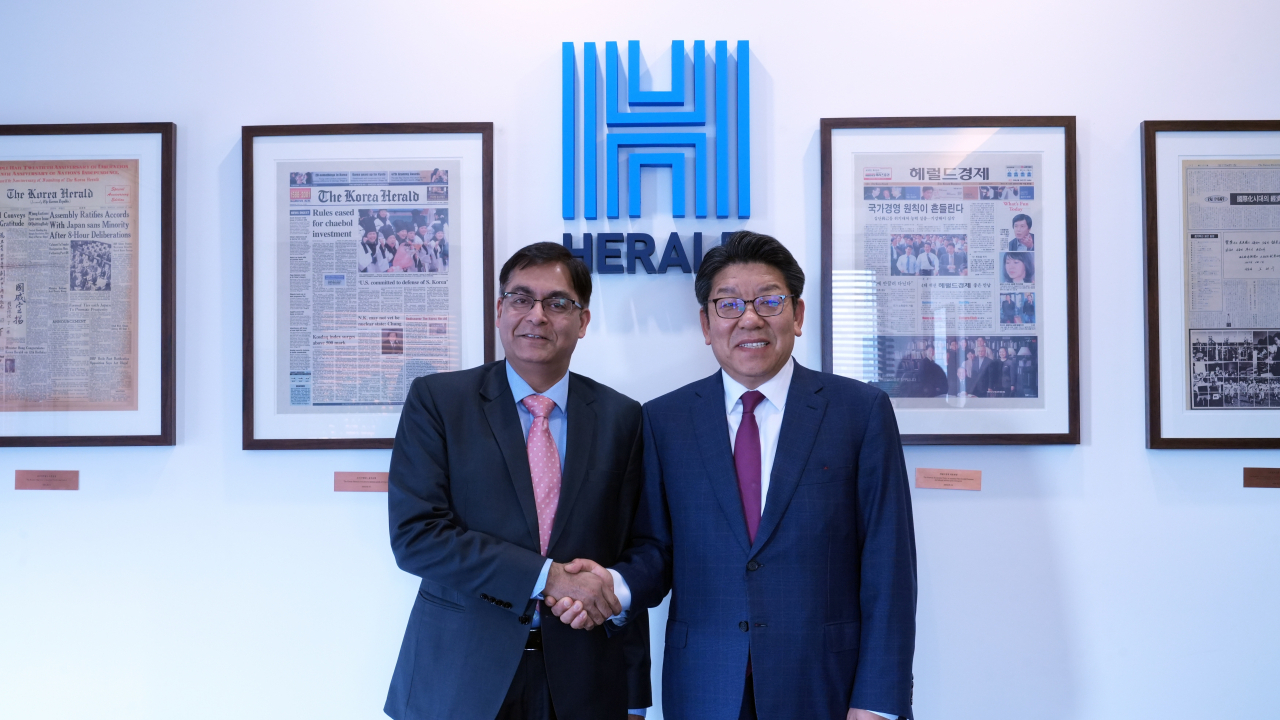 Indian Ambassador to South Korea Amit Kumar (left) and The Korea CEO Choi Jin-young pose for a photo during a courtesy visit to the Herald Corp. headquarters in central Seoul on Friday. (Park Seo-hee/The Korea Herald)

Indian Ambassador to South Korea Amit Kumar and The Korea Herald CEO Choi Jin-young agreed to explore together opportunities for cooperation and to join efforts in raising awareness of India in South Korea and vice versa, in their meeting in Seoul on Friday.

The Indian ambassador who was newly appointed in September also expressed a desire to strengthen the bilateral relations between India and South Korea, which celebrate its 50th anniversary next year.

"I firmly believe that India, currently the fifth-largest economy in the world, will become the third largest in the coming decade. ... And South Korea has gained much achievement in the past with its great strength in manufacturing. So I believe there will be many chances (for the two countries) to create synergies," Kumar said during his visit to Herald Corp. headquarters in central Seoul.

Remarking on the Yoon Suk-yeol administration's new Indo-Pacific strategy and how it would open up South Korea's vision for India, the ambassador also raised anticipation for the two countries to increase strategic and security cooperation.

During the talk, Kumar and Choi exchanged insights on the diverse ways to boost cross-cultural awareness. From what he experienced in the past two months in South Korea, the ambassador expressed hopes on raising awareness among Koreans about India, and also about South Korea to Indians.

“The Korea Herald will continuously play an active role to promote awareness of India in South Korea. We also look forward to working with the Indian Embassy," Choi said.

As the two countries mark the 50th anniversary of diplomatic ties next year, Kumar and Choi shared hopes to explore areas in which they can work together to connect businesses, industry stakeholders and experts from the two countries.

Choi extended an invitation to the Indian Embassy to take part in an economic forum that The Korea Herald is planning to host next year.

The ambassador was previously the consul general of India in Chicago, the United States, before he was appointed to the post in Seoul in September.

After joining the Indian Foreign Service in 1995, Kumar has served as the deputy chief mission at the Embassy of India in Washington DC and in Tokyo, and also as an undersecretary in China, among others.