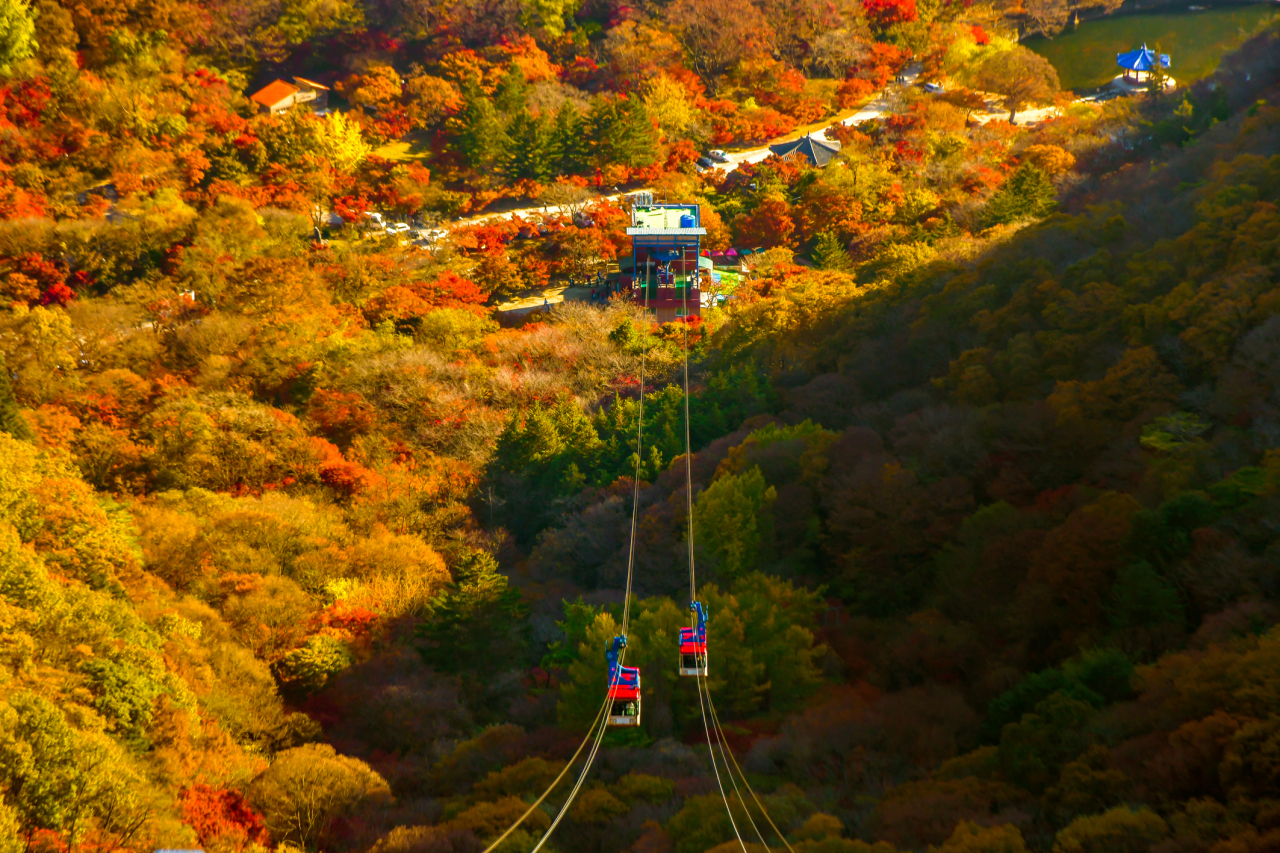 As the temperature starts to drop, the heavy jackets come out from the depths of their closets and trees everywhere start to dress up in their seasonal flaming reds, dazzling yellows and brilliant oranges.

With autumn in Korea seemingly getting shorter every year, travelers are gearing up and preparing to traverse the country to get the most out of the season at popular destinations for leaf peeping.

With the fall foliage expected to be most spectacular from late October through early November, the maple and ginkgo trees that line the streets of most major cities will delight pedestrians as they go about their days.

But with nearly 70 percent of Korea covered in forested mountains, one of the best ways to fully enjoy fall is to visit Buddhist temples tucked away deep in the woods.

Following are some of the country's best fall getaway destinations if you're looking to take a weekend trip and be surrounded by the vivid hues of the season. 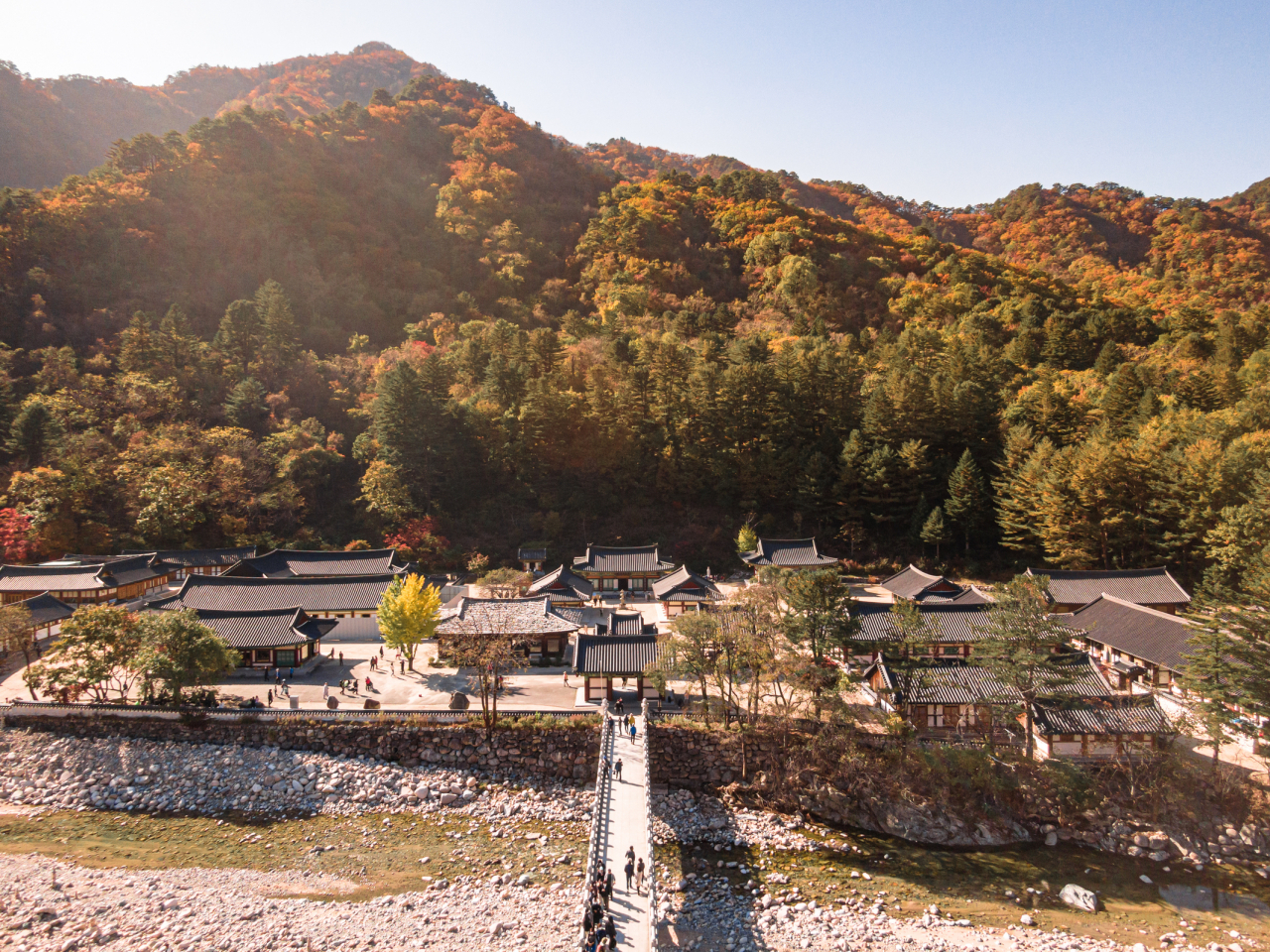 Some 170 kilometers east of Seoul in Gangwon Province, the highland county of Inje welcomes visitors with a splendid mountain range that can easily be spotted from practically anywhere in the area.

As Seoraksan, one of Korea's most popular mountains, is expected to see its fall foliage peak on Monday, the Buddhist temple Baekdamsa is likely to be one of the earliest places to be covered in color.

After a 15-minute bus ride from the temple’s parking lot, visitors arrive at the beautiful temple hidden deep in the mountains. Two separate one-way bus tickets (2,500 won for adults, 1,200 won for those under 19) need to be purchased for the round-trip.

A stone bridge, which serves as the entrance to the temple, is a perfect spot for photos against a background of colorful trees, a fast flowing river and countless handmade stone towers. 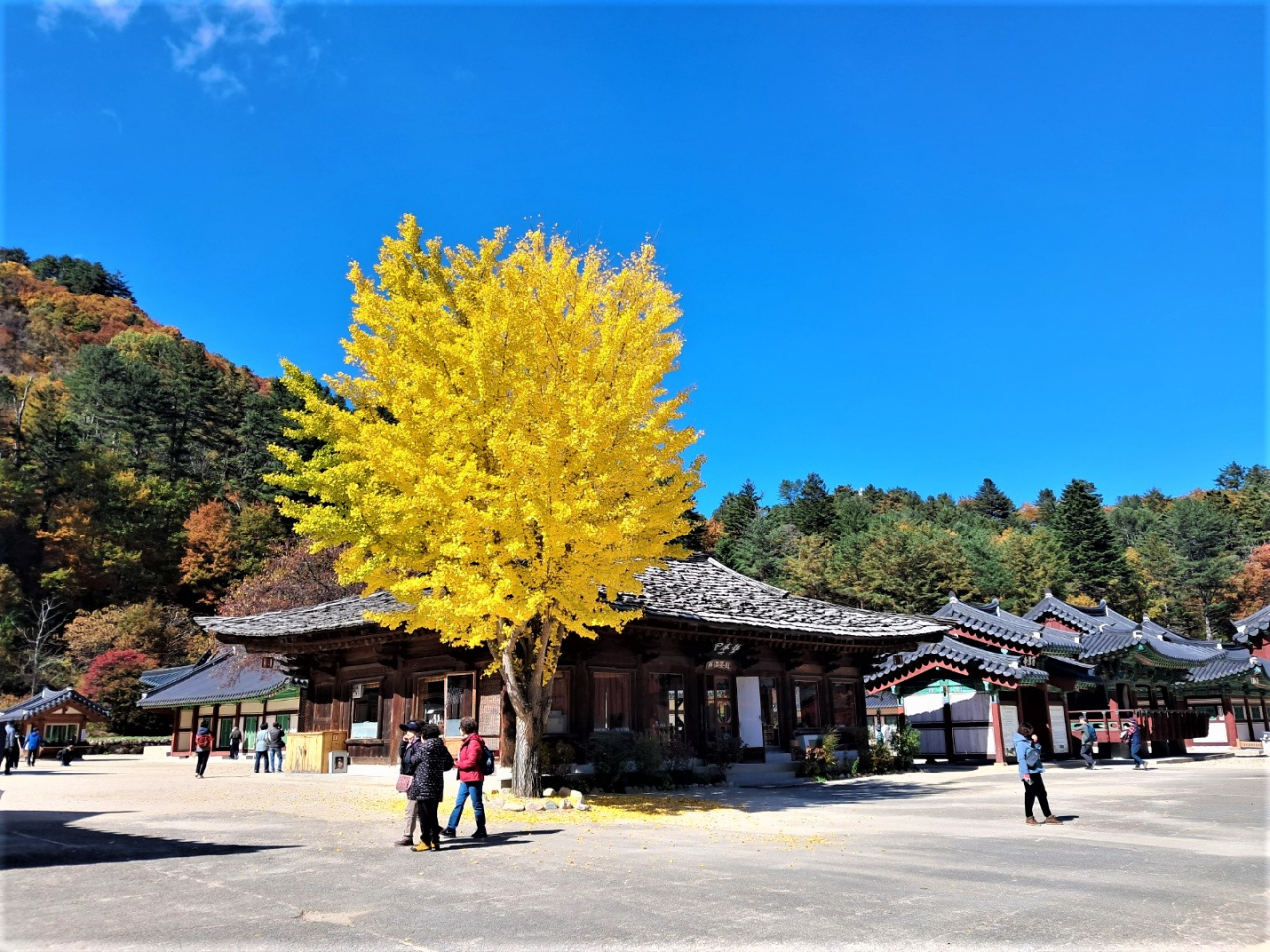 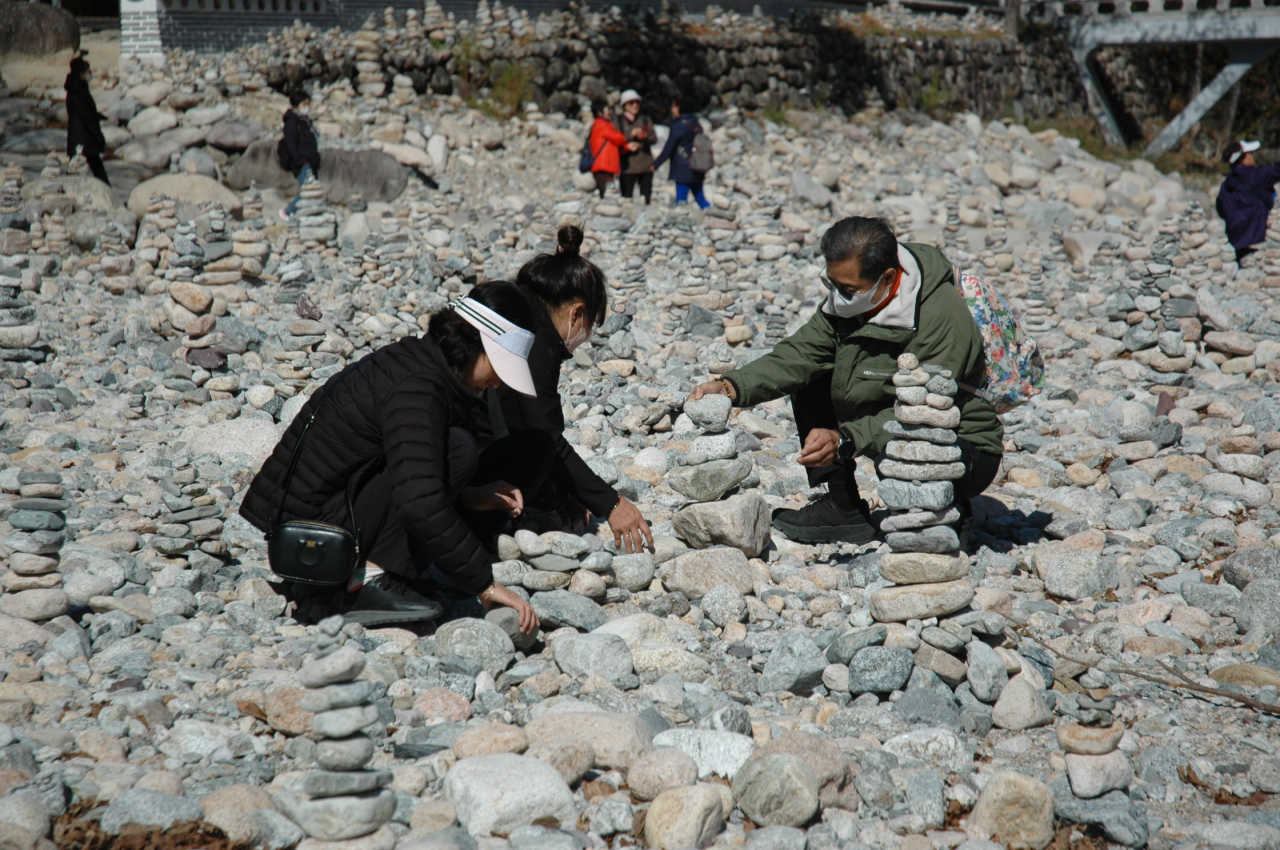 The vast area outside of the temple, covered in pebbles, is often filled with families and friends searching for flat, sturdy rocks to use in building their own stone towers in order to make a wish and pray for good fortune.

Those ready for a hike can follow a trail to Suryeomdong shelter at Seoraksan National Park. The 4.7-kilometer trail, featuring maple tree tunnels, offers spectacular views of Seoraksan. 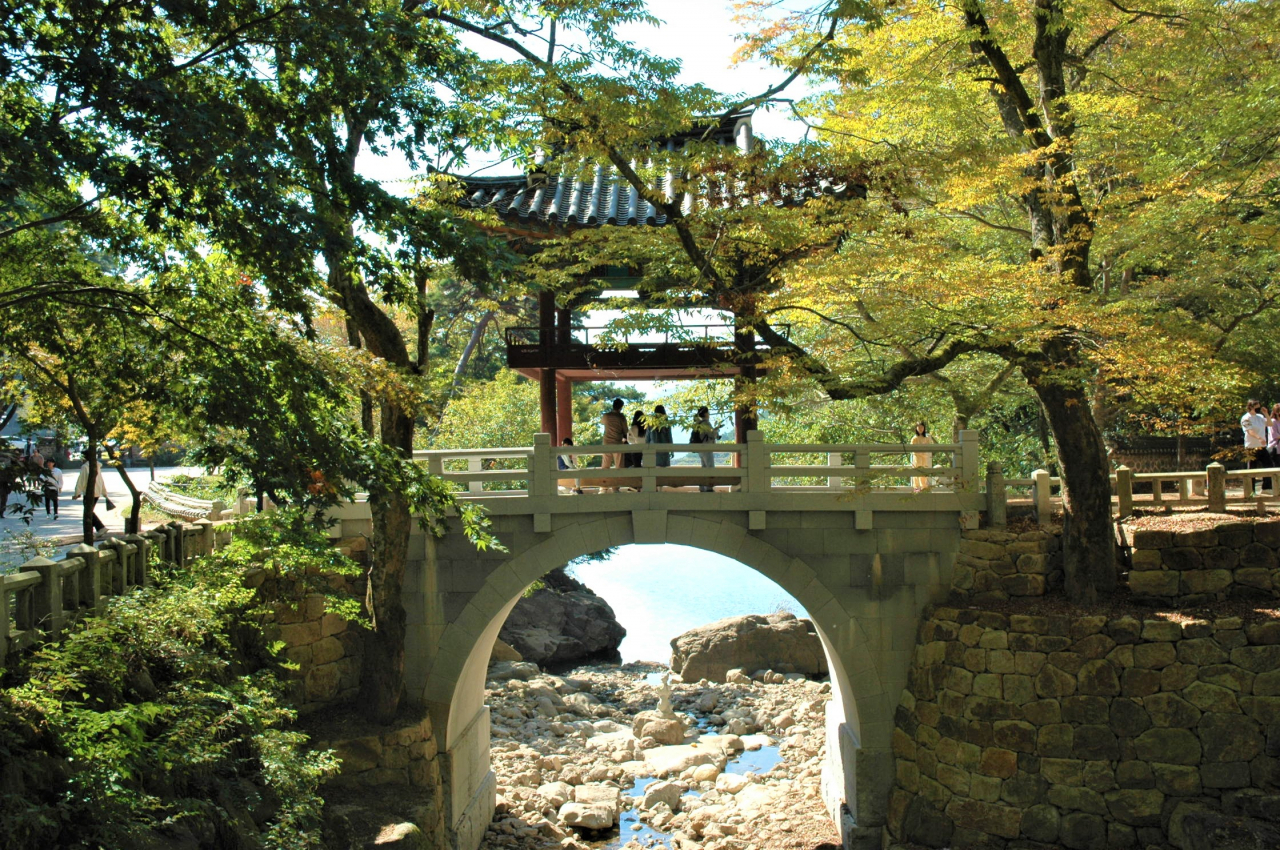 A stone bridge blends in with the ginkgo trees at Cheoneunsa in Gurye, South Jeolla Province, on Oct. 16. (Lee Si-jin/The Korea Herald)

Though Cheoneunsa, some 300 kilometers south of Seoul in South Jeolla Province, may be a long way off for many Seoulites, the renowned temple at Jirisan has everything one could want to fulfill their fall-focused travels, including blazing colors of the foliage and silver grass.

Fans of 2018's period drama “Mr. Sunshine” and this year's hit “Extraordinary Attorney Woo” have already made Cheoneunsa a sought-after tourist destination, but the temple is at its most beautiful when shrouded in red, yellow and orange. The region expects to see its peak fall foliage in late October.

Many visitors can be spotted taking selfies on the stone bridge called Suhongru to capture the moment with loved ones.

After visiting the Buddhist temple, a 30-minute detour to visit the nearby Cheoneun Reservoir is recommended. 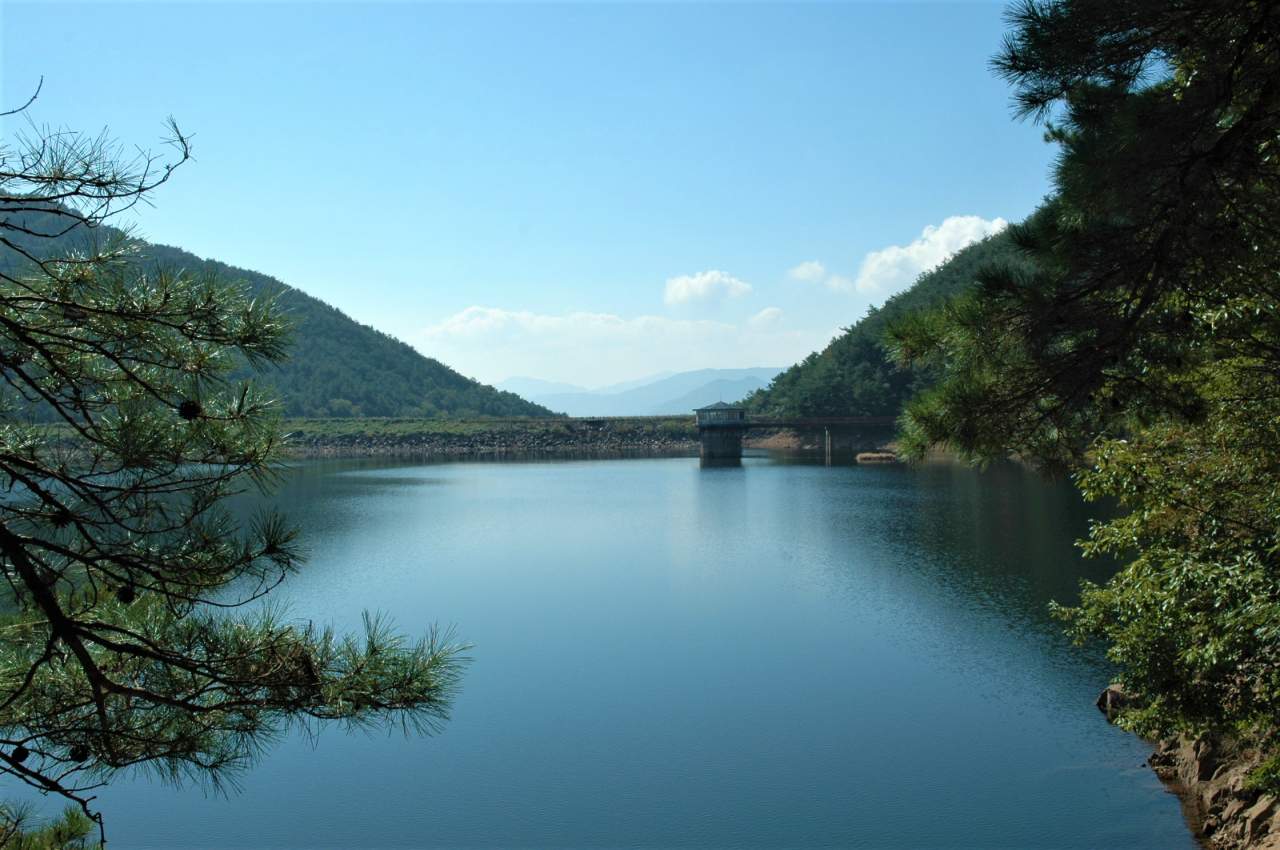 With the gentle autumn breeze, the 3.3-kilometer circular trail Sangseangui-gil is more than sufficient for enjoying the fall mood while walking along the straw-covered path and silver grass.

Those interested in spending more time at the temple to live as the monks do can apply for a templestay program via Cheoneunsa's website. 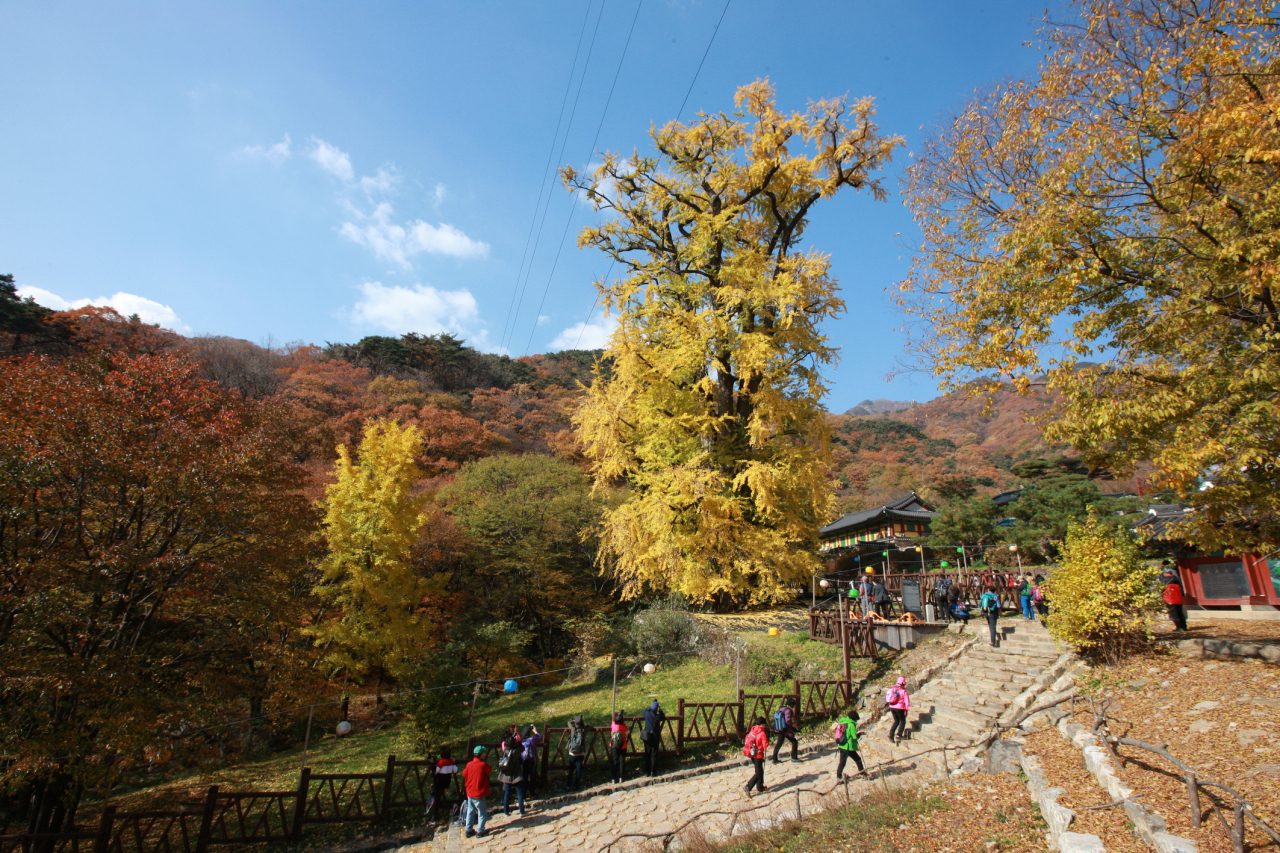 In autumn, the historic temple Yongmunsa offers a magnificent view of fall foliage with its iconic ginkgo trees.

The two lines of ginkgo trees, stretching from the Yongmunsan Tourist Information Center to the ticketing booth, are a favorite spot for many looking to capture fall pictures with loved ones.

After an easy hike, the sounds of traffic near the parking lot die away and are replaced by the chirping of birds. A 20-minute walk brings you to the temple's wooden entrance gate Cheonwangmun, which houses the Four Heavenly Kings.

An iconic gingko tree, the largest in Asia, stands majestic in the temple’s courtyard.

Said to be more than 1,100 years old, the ancient tree grabs the limelight this time of year with its bright yellow ginkgo leaves. 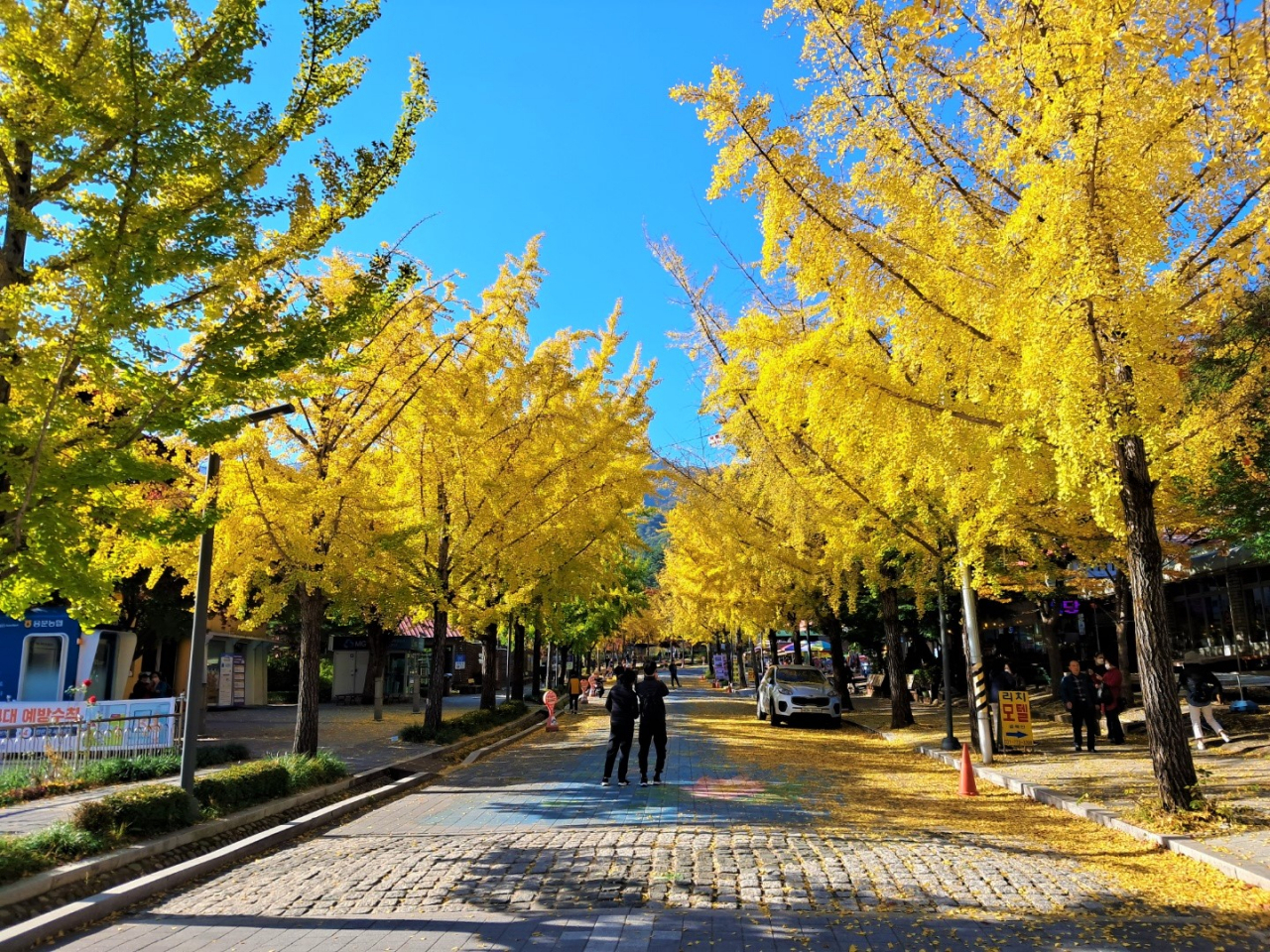 The peak for fall foliage at Yongmunsa is expected for Oct. 27. 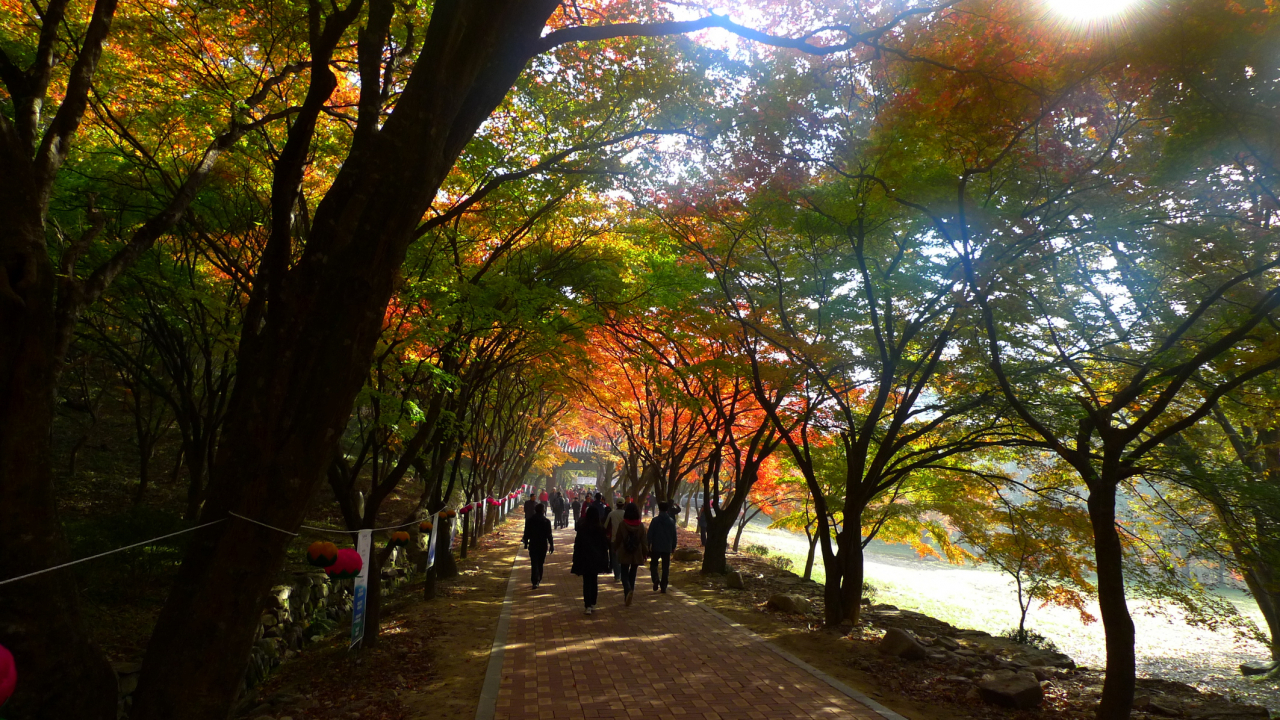 Located in Naejangsan National Park in North Jeolla Province, 250 kilometers south of Seoul, Naejangsa beckons with its Foliage Tunnel, a long archway stretching from the park’s entrance to the temple, lined with over 100 maple trees on both sides of the road.

Visitors can either walk or take a shuttle from the entrance to the temple. Round-trip tickets are 2,000 won for adults and 1,000 won for children.

One of the unique features of Naejangsa is the small stone statue of a Buddhist monk, at which people toss coins into a pond while making a wish.

For a spectacular panoramic view of the entire Naejangsan ridge, consider hopping on the cable car that takes riders to the summit within five minutes. Tickets cost 9,000 won for those 16 and older and 6,000 won for the children. 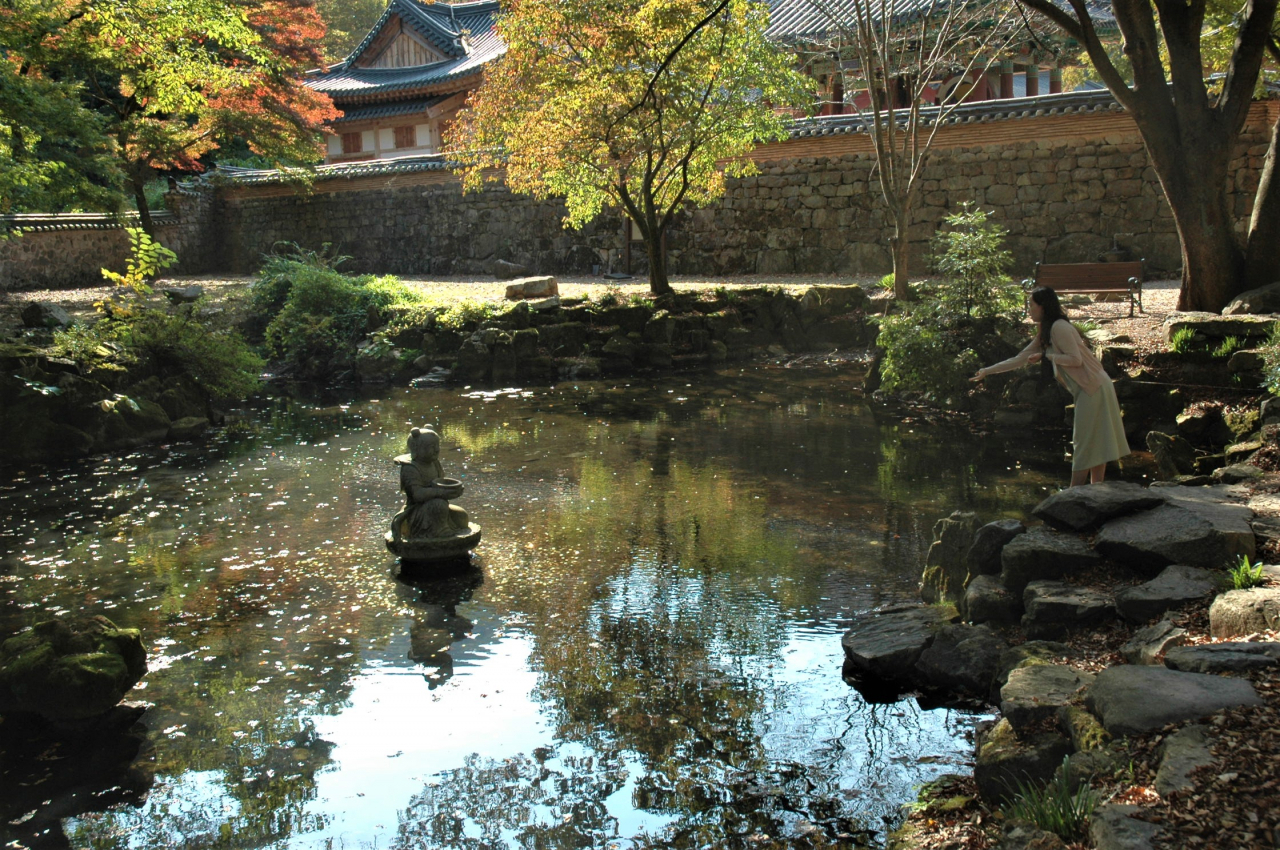 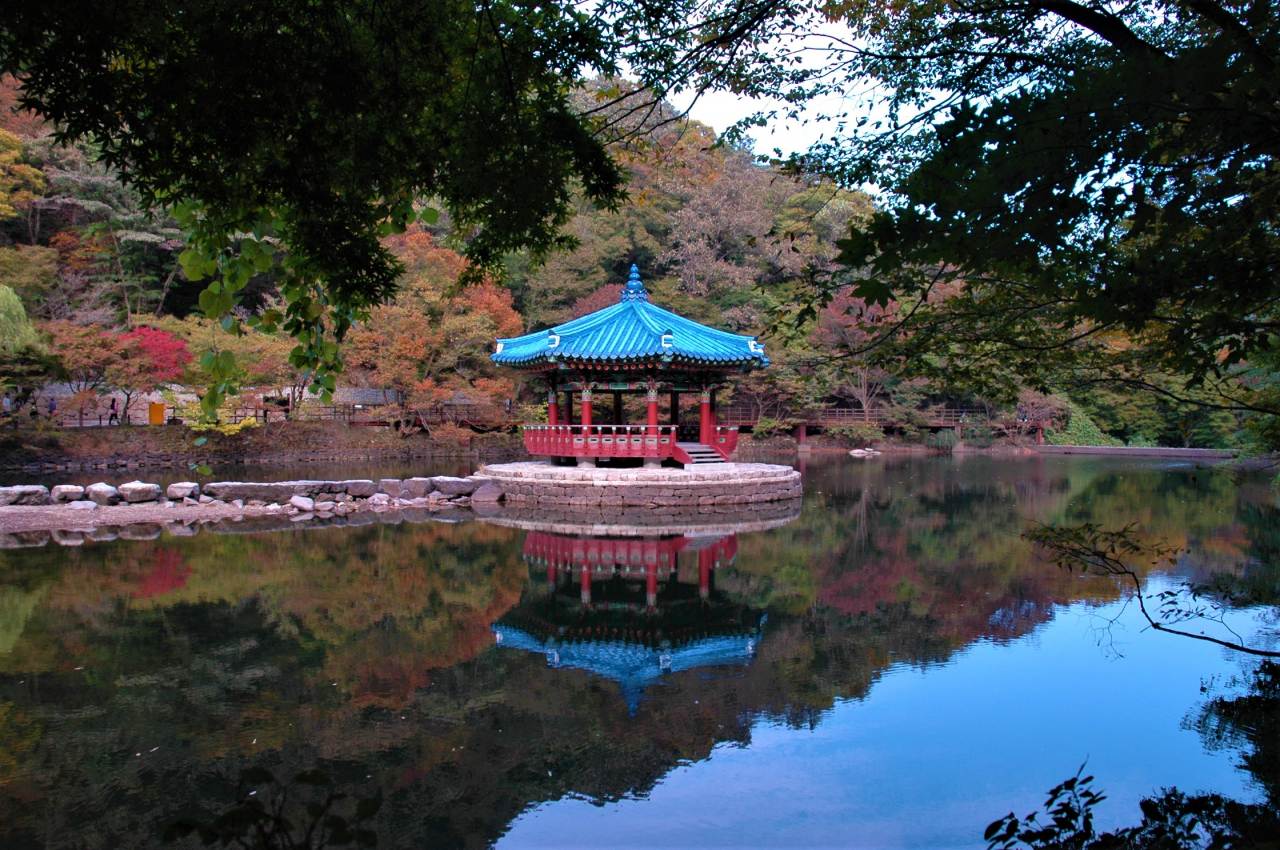 Visitors can also enjoy splendid images of the traditional Korean pavilion Uhwajeong, located near the cable car ticketing booth, reflected in the lake as well.

According to the forest authority and Naejangsa officials, the peak date of fall foliage here is expected in early November. 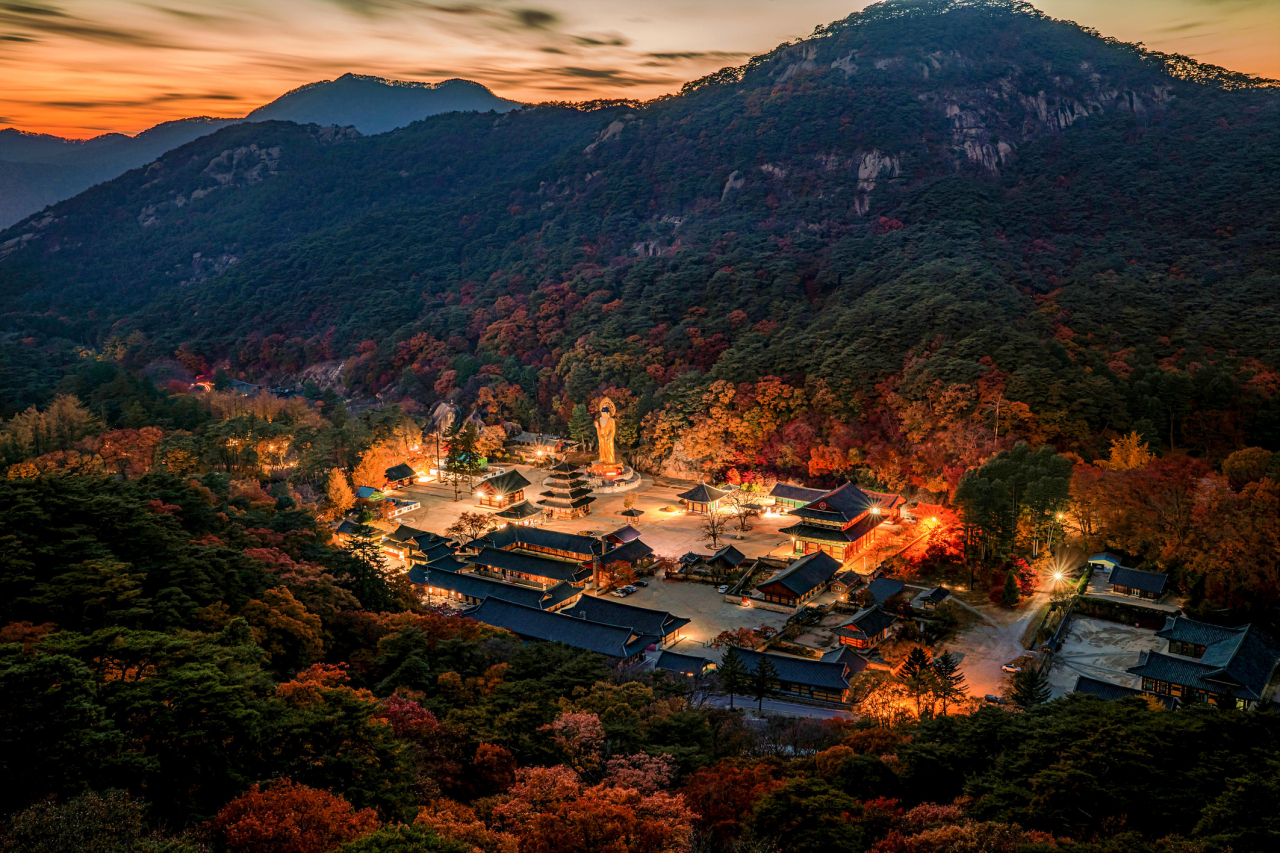 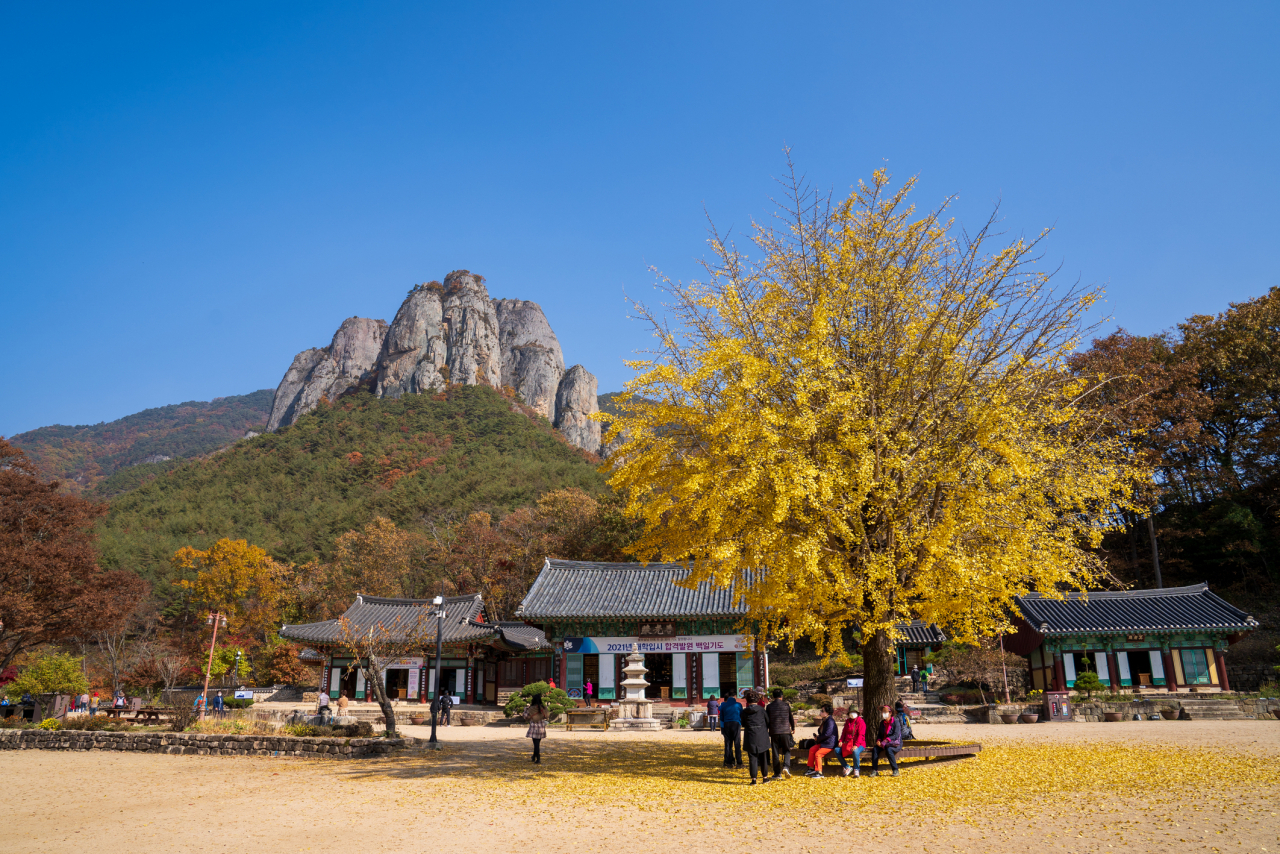 Visitors sit on a bench in front of a ginkgo tree in the courtyard of Daejeonsa in Cheongsong, North Gyeongsang Province. (Kim Ji-ho/Korea Tourism Organization)

Beopjusa is a temple located in Songnisan, a renowned site known for its beautiful seasonal landscape.

About 170 kilometers from Seoul in Boeun, North Chungcheong Province, the peaceful area around Beopjusa is home to various wildlife and colorful trees, including maple, ginkgo and sycamore.

After a five- to seven-minute walk along the Nature Interpretive Trail in Songnisan National Park, visitors can fully immerse themselves in nature along the short Sejo-gil trail, named after the seventh king of Joseon, King Sejo, who enjoyed a leisurely stroll at the trail several hundred years ago.

Home to three National Treasures and a 33-meter-tall Golden Maitreya Statue, Beopjusa is an all-time favorite travel destination for its historical significance and beautiful scenery.

If you want to exercise while enjoying the fall scenery, the mountain trail to Daejeonsa may be an option.

Daejeonsa, a 3 1/2-hour drive southeast of Seoul, is a sought-after landmark every autumn.

Along the 45-minute hiking route, Daejeonsa offers a scenic view with Buddhist architecture and a tall ginkgo tree accentuated by oval-shaped rocks at its back.

This year, the colors of autumn at Beopjusa and Daejeonsa are expected to start around Monday to Wednesday, coming fully into focus on Nov. 4 and 5. 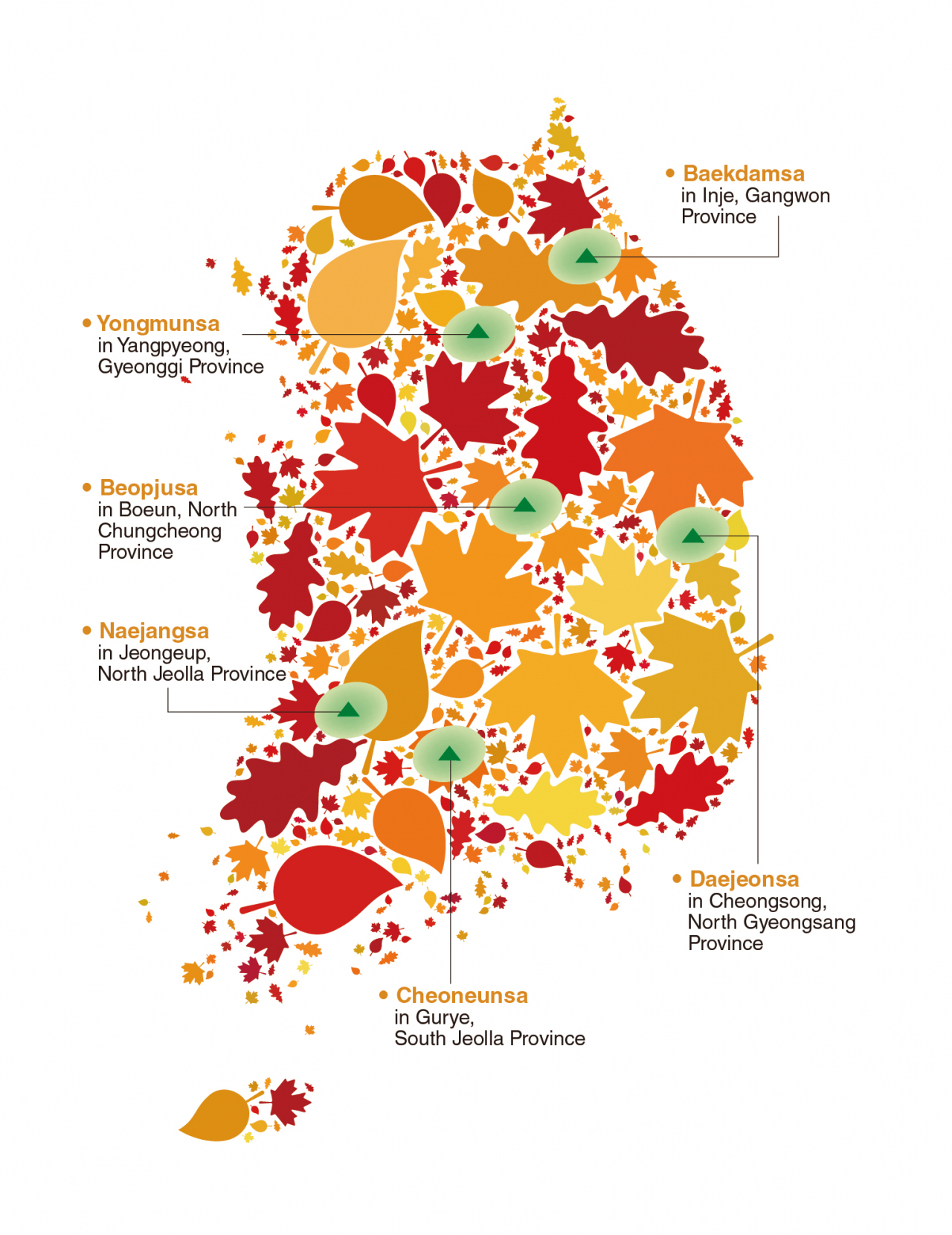 Map of Buddhist temples for fall foliage (The Korea Herald)