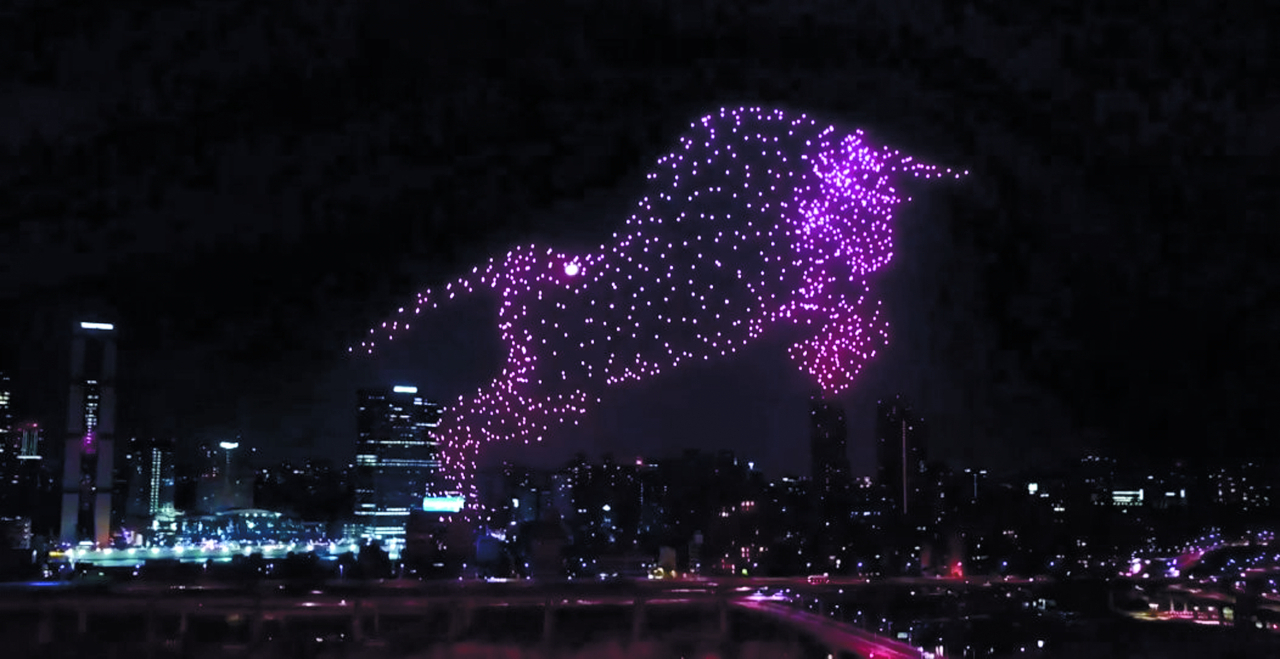 A total of 1,000 light-bearing drones form the shape of an ox in the night sky on Dec. 31. 2021, in a swarm drone show in Seoul prepared by UVify for Hyundai Motors. (UVify)

The small vehicles, equipped with colorful LED lights and capable of flying at speeds of 6 meters per second, quickly gather and scatter to form various shapes and relay messages, with the night sky serving as a black canvas.

At one moment, the light-bearing quadcopters morph into a slow-moving whale and the next into an angry bull, dazzling spectators on the ground.

South Korea is fast catching up in the field that requires both technology and artistic sensibility, local industry officials said.

Among the proponents is Pablo Air CEO Kim Young-joon.

“It was after watching a drone show during the opening ceremony of PyeongChang Winter Olympics that I first learned that a swarm of drones could make a wonderful and colorful show,” said Kim, who founded the startup in 2018.

He was referring to a show by Intel which mobilized some 1,218 high-tech drones to conjure the image of five Olympic rings in the night sky during the ceremony held in the Korean city.

On Wednesday, Kim’s company held an extended reality drone art show “Flying Art in Jeju” in which 300 drones, fireworks, music and dance came together for a new musical experience on Jeju’s Boromwat, a themed outdoor garden on the southern island.

Lim Hyon, CEO of UVify, which was founded in 2015 by a team of aerospace, mechanical engineering, and machine vision specialists, also shifted the firm’s focus to drone-powered shows after the Olympics. Before the company had focused on racing drones.

“UVify's mission is to make the experience for those who attend outdoor events more rewarding. Drone light shows and their beauty are an experience meant to be shared,” the company said.

The firm has built their track record securing deals from big names like Hyundai Motors and K-pop sensation BTS.

Busan Gwangalli Marvelous Drone Light Show, which has taken place every Saturday on Gwangalli Beach since last December, is one of the company’s ongoing main projects. The contract between Suyeong-gu and the drone company ends in May next year.

The 10-minute show uses 500 synchronized, illuminated drones to not just put up a visually stunning show, but to relay messages, like for peace in Ukraine and global megahit "Squid Game."

To celebrate Chuseok, one of the most important and festive holidays of the year here, a whopping 1,000 drones were mobilized for an aerial show on Sept. 10, which illustrated traditional Korean outdoor games.

The Guinness World Records title for the most Unmanned Aerial Vehicles is held by Hyundai marque Genesis, which conducted a 3,281 drone show in Shanghai in March last year.

“The drone light show is expected to emerge as a representative tourism product in Busan. It will revitalize the Gwangalli commercial district, which was hit hard by COVID-19 pandemic,” a Suyeong-gu official said. 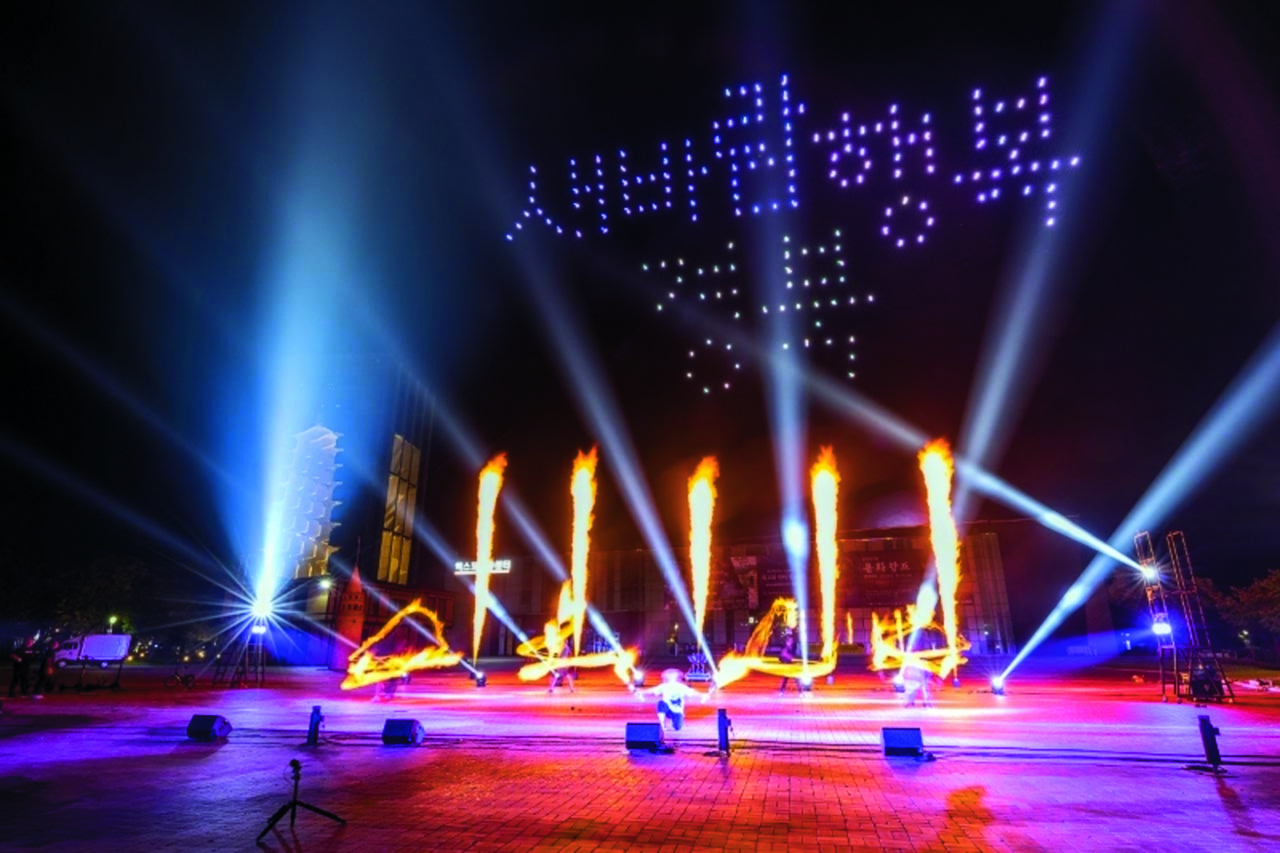 Precision is all that matters

To make hundreds of drones fly in a choreographed formation, precise coding and programming is needed. Among the factors to be considered are airflow generated by drone rotors and safety distance between drones to prevent collision.

On-site variables or small mistakes could easily result in crashes, which would cost millions of won per unit, aside from the potential damage they could inflict on something or someone on the ground.

UVify’s flagship quadcopter IFO, which was first unveiled at the world's largest technology event CES 2019, has a maximum flight time of 20 minutes. It is also equipped with an integrated Real Time Kinematic GPS and redundant communication, which ensures accurate positioning and the ability to overcome interference.

“Drones can think for themselves and draw a map, avoid obstacles, and recognize their location even indoors or in bad weather conditions where GPS is not available,” Lim, the company’s CEO said. 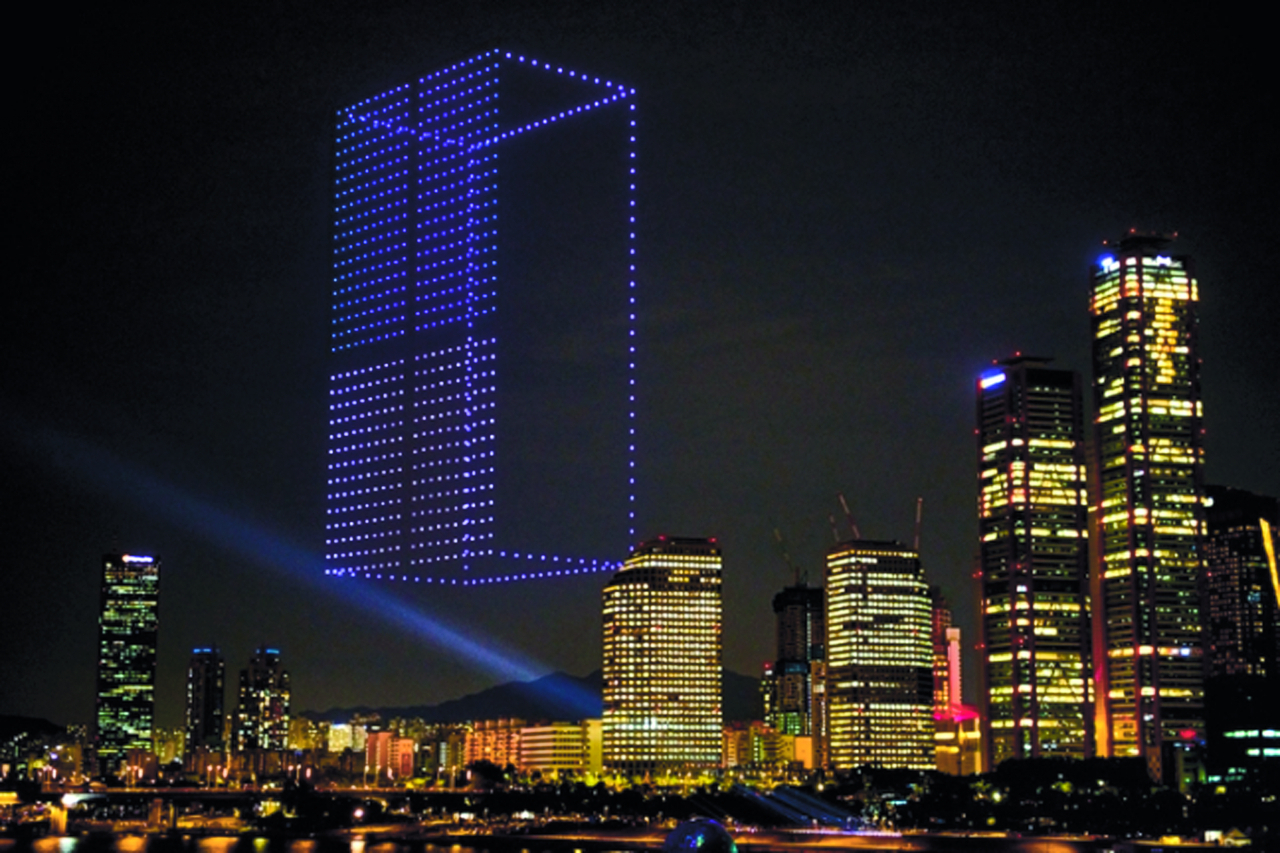 Drones illustrate the shape of a refrigerator to celebrate LG Electronics' launch of a new appliance line on Sep. 24. (LG Electronics)

As drones are reusable and do not produce air and noise pollution, industry experts expect that they could replace nearly half of traditional fireworks displays.

The global fireworks market was valued at $2.48 billion in 2020 and is expected to reach $3.24 billion by the end of 2027, according to Industry Research.

Currently, drones are all the rage in Korea: Some replace fireworks, or guest star in firework shows at festivals. But others are carving out a market of their own.

K-pop star IU opened her concert at Seoul Olympic Stadium, held on Sept. 18 and 19, with a drone show that formed a portrait of the singer and other symbolic icons of her songs.

The drone show was intended to be seen from outside the stadium as well so fans who couldn’t get tickets to the concert could also enjoy the spectacle.

Large conglomerates like Hyundai and LG have used drones as a tool for promoting newly launched products.

The scenery of Seoul and a simplified image of a refrigerator illuminated the sky of Yeouido Hangang Park. The performance was also livestreamed on YouTube.

In the upcoming months, several festivals are scheduled to feature drone shows, including ones at Eunpyeong-gu in Seoul, Seongnam city in Gyeonggi Province and Donghae city in Gangwon Province.

The use of drones for entertainment and promotion is likely to be expanded as companies like UVify provide a package of services enabling clients to design and carry out their own shows with software and operational training courses.