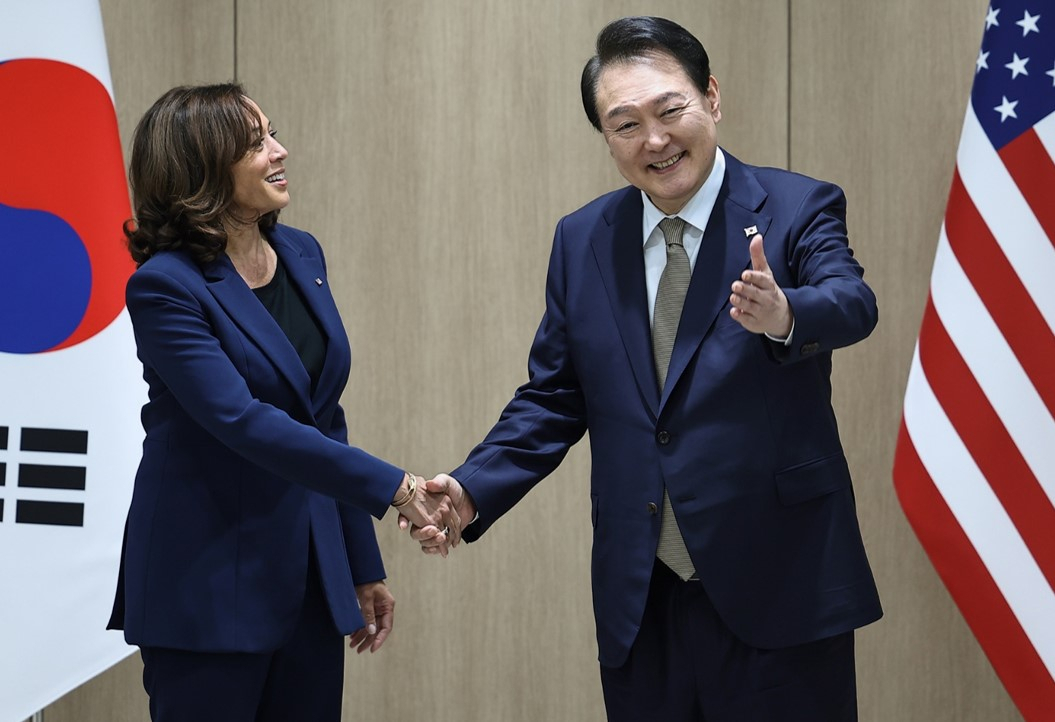 South Korean President Yoon Suk-yeol and US Vice President Kamala Harris pose for a photo before sitting down for talks at the presidential office in Seoul on Thursday. (Pool photo) (Yonhap)

President Yoon Suk-yeol expressed concerns on Thursday to US Vice President Kamala Harris, who is in Seoul, about the Inflation Reduction Act that could damage Korean automakers. Harris replied that she would come up with measures to address Korean worries in the process of enforcing the act.

It is the first time in 4 1/2 years for a sitting US vice president to visit Korea since the PyeongChang Olympics in February 2018, when former Vice President Mike Pence came here.

Regarding the US Inflation Reduction Act, which could damage Korean electric vehicle makers in the US due to discriminatory subsidies, Yoon told Harris: “We expect the two countries to work closely to reach a mutually satisfactory agreement based on the spirit of the Korea-US free trade agreement,” according to the presidential office.

Harris responded by saying that not only she, but also US President Joe Biden are well aware of Korea’s concerns and will take care to come up with measures to address them during the IRA’s enforcement process, the office said.

When Yoon visited New York to attend the United Nations General Assembly last week, he also asked for a solution to the IRA issue.

A senior official at the presidential office said on the condition of anonymity, "It is a step forward in that (the US) is well aware of South Korea's concerns."

A day before the US vice president’s trip to Seoul, North Korea fired two short-range ballistic missiles eastward from the capital city of Pyongyang on Wednesday evening.

"The two sides appreciated the close consultation between the two countries to strengthen the joint defense posture, and agreed to immediately implement countermeasures jointly prepared by South Korea and the US in case of serious provocations such as a seventh nuclear test,” the office said.

Following the talks with Yoon, Harris met with female leaders here and stressed the importance of promoting gender equality at the national and global levels.

As the last item on her agenda for Thursday, Harris visited the Demilitarized Zone, which straddles the inter-Korean border amid a difficult situation on the peninsula due to North Korea's recent legislation on nuclear weapons and its continuous launch of ballistic missiles.

At Panmunjom, Harris denounced North Korea for its brutal dictatorship, unlawful weapons program and human rights violations. “The US seeks a world where North Korea poses no threats,” Harris said.

A day before Harris visited Korea, North Korea launched two short-range ballistic missiles off its east coast on Wednesday evening. Despite the provocations, the White House said Harris would not change her plan to visit the DMZ.

“Harris’ visit to the DMZ will underscore the strength of the US-Korea alliance and the US’ commitment to stand beside South Korea in the face of any threats posed by the North,” the White House said.