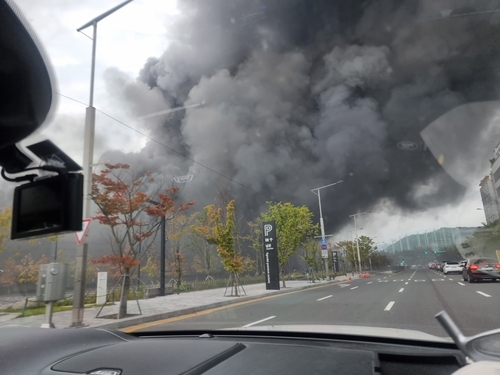 This photo shows a fire at Hyundai Premium Outlet in Daejeon. (Yonhap)

[1] The death toll from an outlet mall fire in the central city of Daejeon has risen to seven, officials said Monday, as a search is underway to determine whether there are any other victims.

[2] The blaze is believed to have started from the basement parking lot at Hyundai Premium Outlet in Daejeon, about 160 kilometers south of Seoul, at 7:45 a.m. and spread quickly on cardboard boxes, sending dark smoke filling the entire floor, according to witnesses and survivors.

[3] Two men, one in his 50s and the other in his 30s, were found with serious injuries and sent to a hospital, but later pronounced dead in the morning. Five more people died later, while a search is underway to confirm the exact extent of the damage from the fire, according to the officials.

[4] Some 110 people, mostly customers at nearby accommodation buildings and employees, evacuated. No outlet customers were around, as the fire broke before the mall's business hours.

2. Former Jaguar designer urges to transform in thinking of cars

[1] Ian Callum, the man behind the British carmaker Jaguar’s renaissance in recent decades, urged designers to transform the way they interpret transportation as a mere object for mobility, saying that the world that is rapidly changing and facing an array of problems that didn't exist before.

[2] “Design creates order out of chaos, but chaos is often required as a prerequisite to being creative,” he said, adding that designers today must come with ideas that not only reflect human emotion in products but also make them practical at the same time.

[3] The 68-year-old British luxury car designer has most recently led the design team of Jaguar Land Rover. Callum, who has over 40 years of experience with major carmakers including Ford and Aston Martin, established his own automotive and product design company, Callum, in 2019.

[4] Callum said designers should be able to narrate brand stories within their work.