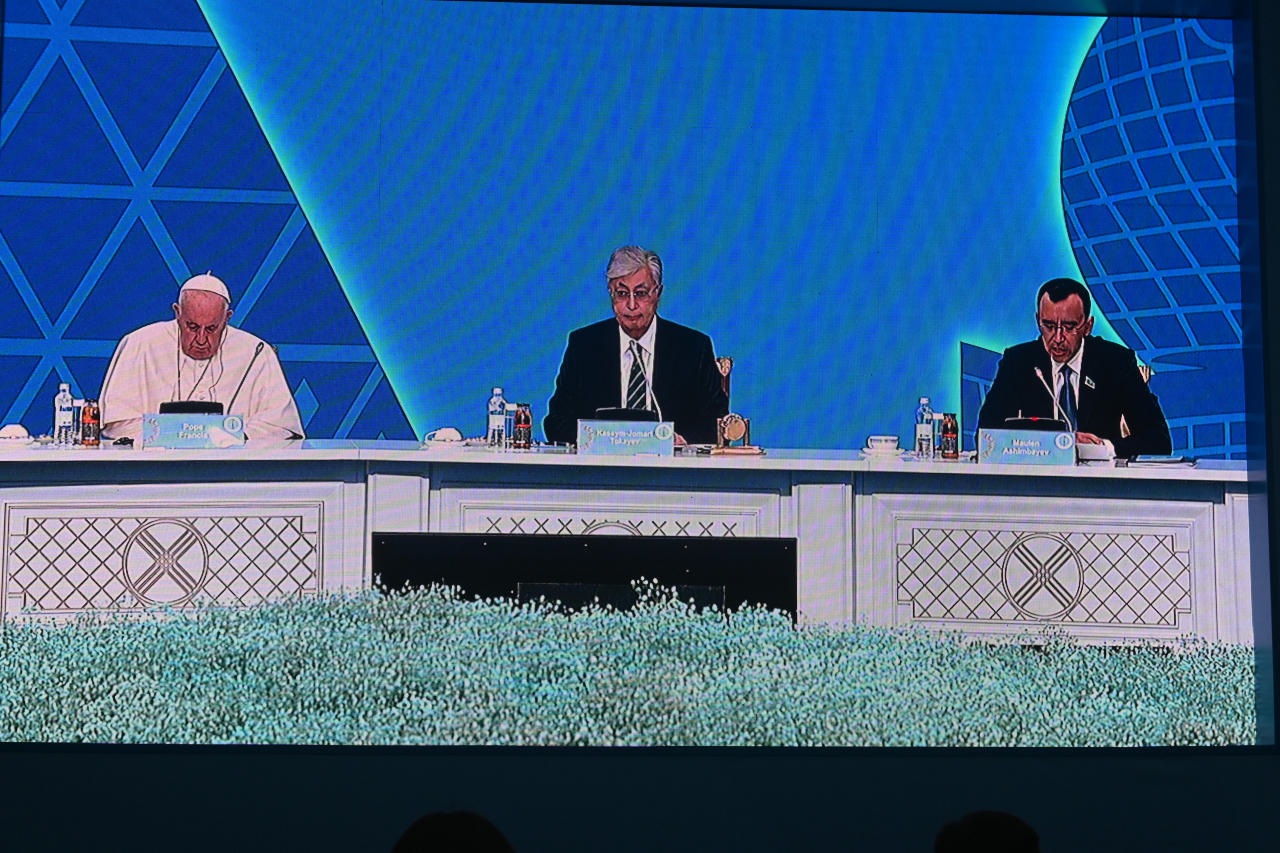 President Kassym-Jomart Tokayev(second from left) and Pope Francis(first from left) attend the opening ceremony of the Seventh Congress of Leaders of World and Traditional Religions in Nur-sultan, Kazakhstan on Sept. 14. (Sanjay Kumar/The Korea Herald)

NURSULTAN, Kazakhstan – Over 100 delegations from 50 countries, including representatives of Islam, Christianity, Judaism, Shintoism, Buddhism, Zoroastrianism, Hinduism, and other religions discussed spiritual and social development of human civilization in a post-COVID world at the Seventh Congress of Leaders of World and Traditional Religions in Nur-Sultan, the capital of Kazakhstan, through Sept. 14-15.

Established in 2003, the congress functions as an international interfaith institution for dialogue.

Chairing the congress, Kazakh President Kassym-Jomart Tokayev said that the forum was a significant platform for dialogue between civilizations, going on to emphasize new approaches necessary in international trade, economic cooperation, and support for developing countries.

Tokayev pointed to the intensified geopolitical confrontation between major powers, the collapse of the previous system of international security, and threats such as extremism and terrorism, and expressed concern over returning tension, mutual distrust, and even hostility to international relations.

“What can we rely on to counter today's challenges? History provides only one answer – goodwill, dialogue, and cooperation,” said Tokayev.

According to Tokayev, Kazakhstan favored solving disputes at the negotiating table in line with the spirit of the UN Charter.

“Threats, sanctions, and the use of force do not solve problems,” he said.

“The absolute value of human life, respect for each other's interests, mutual assistance, openness, equality, and justice -- these are the pillars of the new security system,” he stressed, adding that moral authority and voice of spiritual leaders are crucial today.

Tokayev applauded the historical significance of the call of Pope Francis and the current Grand Imam of al-Azhar Ahmed El-Tayeb at the congress.

“No global problems can be solved without constructive dialogue and mutually beneficial cooperation,” he underlined.

He stressed the need to utilize the peacemaking potential of religions and unite the efforts of spiritual authorities in search of long-term stability.

Tokayev said that fundamental principles based on humanistic ideals, recognition of the supreme value of human life, and the aspiration for peace must be reflected not only in the spiritual sphere but also in the socio-economic development of states and international politics.

He urged religious leaders to insist on simultaneous and complementary spiritual and technological development to overcome contradictions of the modern world and achieve greater well-being for all humanity.

Tokayev met with representatives of international organizations, religious leaders, and heads of religious universities on Sept. 13 on the eve of the seventh Congress,

He met the high representative for the United Nations Alliance of Civilizations (UNAOC), Miguel Angel Moratinos, and discussed future collaboration between Kazakhstan and UNAOC.

Moratinos applauded the Congress’s high level of an organization hoping the outcomes would contribute to fostering peace, harmony, and inter-religious dialogue.

Pope Francis participated in the Congress as part of his state visit to Kazakhstan.

He highlighted the fundamental role of Kazakhstan in promoting inter-ethnic and inter-religious dialogue.

The pope quoted Kazakh poet Abai Kunanbayev, saying “The basis of peace is love and justice” and urged the participants to be mindful of the horrors and mistakes of the past. 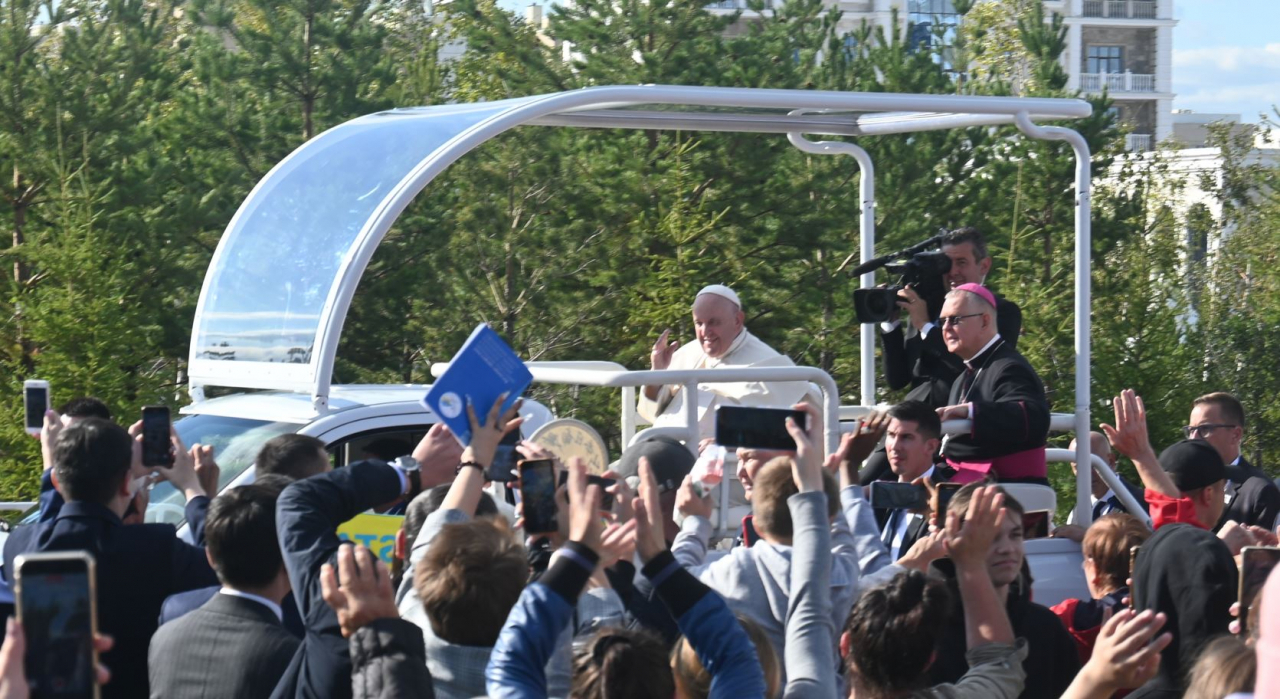 He noted Kazakhstan’s prominence as a link between Europe and Asia and appreciated Kazakhstan’s contribution to nuclear disarmament, development of environmental policies, and commitment to carbon neutrality.

Francis further commended Kazakhstan’s decision to abolish the death penalty, which, as he put it, is an affirmation of the value of human life in the name of the right to hope for every human being.

“We need leaders who at the international level could promote mutual understanding and dialogue between peoples, and revive the Helsinki spirit, the aspiration to strengthen multilateralism, build a more stable and peaceful world, taking care of new generations,” he said.

The Helsinki Spirit refers to forging partnerships to create a new vision and agenda for Europe based on the values and principles of the 1975 Helsinki accords.

The accords culminated with the 1975 Helsinki Final Act, which saw the birth of the Organization for Security and Cooperation in Europe, with 57 member states from Europe, Central Asia, and North America. 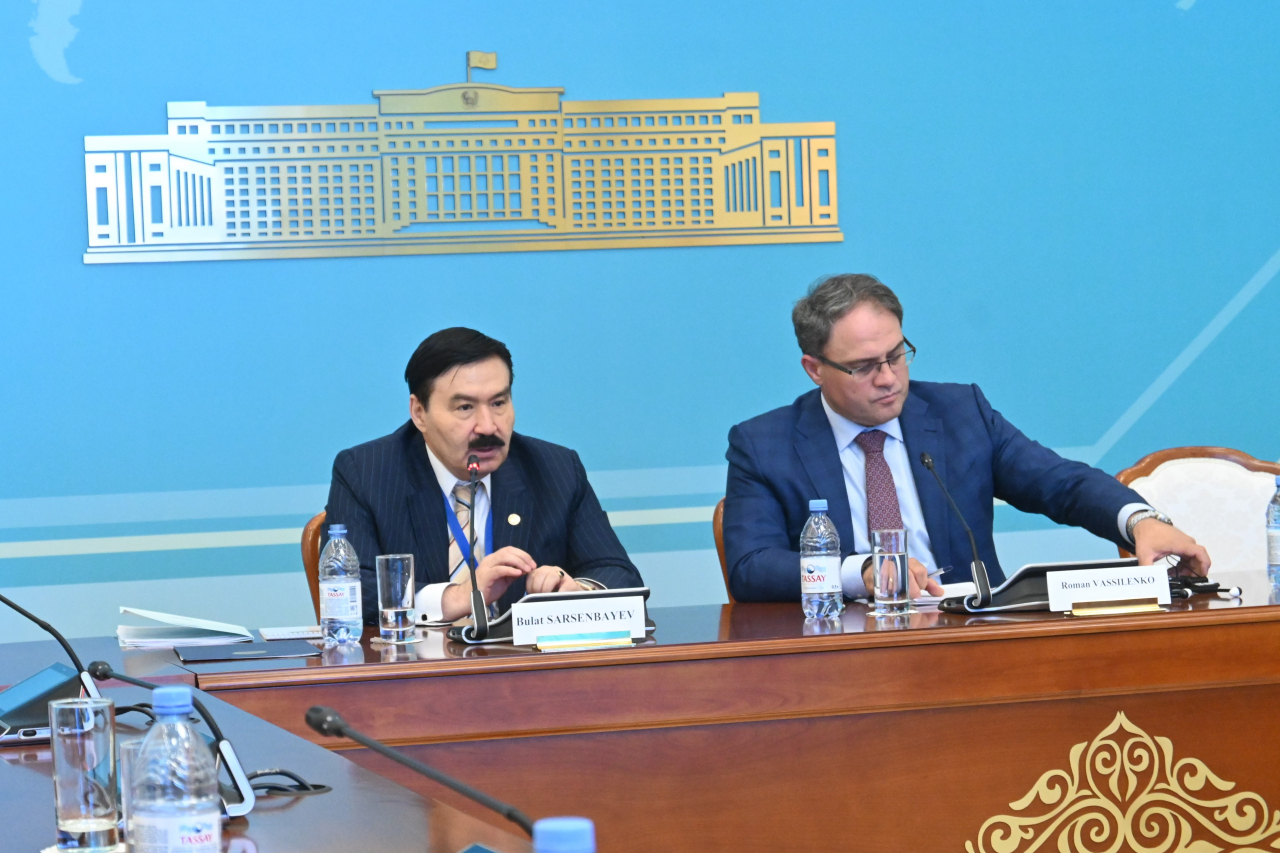 Bulat Sarsenbayev(first from left), the Chair of Kazakhstan’s Nazarbayev Centre for Development of Interfaith and Intercivilizational Dialogue, and Kazakhstan’s Deputy Foreign Minister Roman Vassilenko introduce the agenda and significance of the seventh Congress of Leaders of World and Traditional Religions to a group of visiting foreign journalists at the Kazakhstan Foreign Ministry in Nur-Sultan on Sept. 13 (Sanjay Kumar/The Korea Herald)

Kazakhstan hosted an OSCE summit in December 2010 and has suggested “updating” the 1975 Helsinki Final Act of the then Commission on Security and Cooperation in Europe.

Kazakh Deputy Prime Minister and Minister of Foreign Affairs Mukhtar Tileuberdi and Vatican Secretary for Relations with States Archbishop Paul Richard Gallagher signed an additional agreement to the one signed between Kazakhstan and the Holy See on mutual relations on Sept. 24, 1998, to enhance cooperation between the states Wednesday.

The two leaders stressed the importance of encouraging interfaith harmony and interreligious communication, one of the critical tasks of the seventh Congress of Leaders of World and Traditional Religions.

Concluding the congress and reading the declaration, the Pope termed his motto to visit the Congress as “Messengers of Peace and Unity.”

“Pseudo-religious terrorism, extremism, radicalism, and nationalism, dressed up in religious garb, nonetheless continue to foment fears and concerns about religion,” he said, adding that violence and extremism in the name of religion have nothing to do with the authentic spirit of religion and must be rejected in the most decisive terms possible.

At the congress, Patriarch Theophilus III said that values of peace-making, justice and reconciliation exist in the heart of all tremendous historical religious traditions

“All religious traditions have at their heart the supreme value of peace: peace between God and humanity, peace within the human family, and peace between humanity and creation,” he said.

“We who come from Jerusalem -- which means 'the foundation of peace' -- understand the power of peace which gives birth to co-existence, mutual respect, and harmony,” he said.

Theophilos III said that humanity throughout the ages suffered from war and violence.

“War and violence are not from God," he said. "And this is why the great Prophet Isaiah is exhorting us to remind us of our responsibilities, and not to be idle, by telling us:

"They shall beat their swords into plowshares and their spears into pruning hooks; nation shall not lift up sword against nation; neither shall they learn war any more.”

Delivering his speech, the supreme imam of the Al-Azhar University, Ahmed Mohamed Ahmed el-Tayeb touched upon problems of the global economy, climate change, and gender issues and called for "openness" and a real mutual dialogue between religious scholars themselves.

El-Tayeb called for a special and focused meeting among religious chiefs to discuss their own responsibilities and the responsibilities of other leaders, politicians, and senior economists toward these moral and natural disasters that threaten the future of all humanity.

“Peace among peoples is an olive branch between religions, and that ‘religious fraternity’ generates and realizes ‘world human fraternity,’" he said.

“The branch cannot exist, act, or have an influence without its originator. The best way to start -- in my opinion -- is with the resurrection of this fraternity between scholars and religious leaders, for they are the most skilled in diagnosing moral and social ailments and diseases and treating them with religion," added el-Tayeb.

He urged serious action to promote the mutual values between religions, particularly civilized acquaintance, mutual respect, and coexistence between people calling upon religious leaders in the West and the East to utilize the experience acquired from documents on human fraternity.

Meanwhile, United Nations Secretary-General Antonio Guterres also praised the Kazakhstan government for hosting the congress in a video address to the participants.

The participants of the Congress adopted a declaration on Human Fraternity and reaffirmed to enhance mutual respect and peace which will be distributed at the 77th session of the UN General Assembly on Sept. 22.