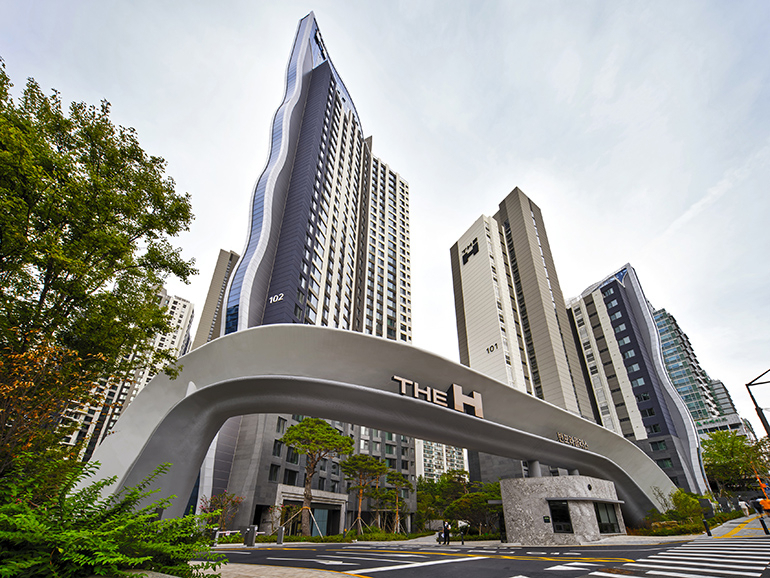 In Seoul's southern district of Banpo, an apartment complex recently won a prize at the international iF Design Award 2022 in Germany, not for the design of its main building, but for its grand and magnificent front gate.

Standing 8 meters tall and 70 meters long, the large curved entrance gate is the first impression of “the H Banpo La Class,” the apartment complex built by Hyundai E&C last year. At night, the massive structure is illuminated with more than 12,000 LED lights, giving visitors that feeling that they are entering a magical space unlike any other apartment complex in the country.

Built primarily to inspire awe, the gate structure serves little practical functions, having no door or fence. But it provides an ego boost for the complex's residents.

Competition at the gate

Korea’s apartments may look like the country's architects lack creativity, but there has been a heated race among builders to erect something that stands out -- a massive entrance that gives off an unforgettable first impression of an other-wise boring housing complex.

The 70-meter-long front gate of Samsung C&T’s Raemian Leaders One, built in Seocho-dong in 2020, catches the eyes of residents and visitors with its feature wall on the left that has a fountain flowing into a pond at the bottom.

Banpo LE-EL in Jamwon-dong, built by Lotte E&C in August last year, boasts an even longer structure that measures 100 meters.

Not to be outdone, existing complexes are putting money into renovating and refurbishing their main entrances to keep up with the Joneses.

Homeowners living in Seoul Forest Hanshin The Hue, an apartment complex built in Seoul's Seongdong-gu in 2003, decided in 2020 that they needed a new entrance gate, and a large square structure made of marble was erected in March 2021. 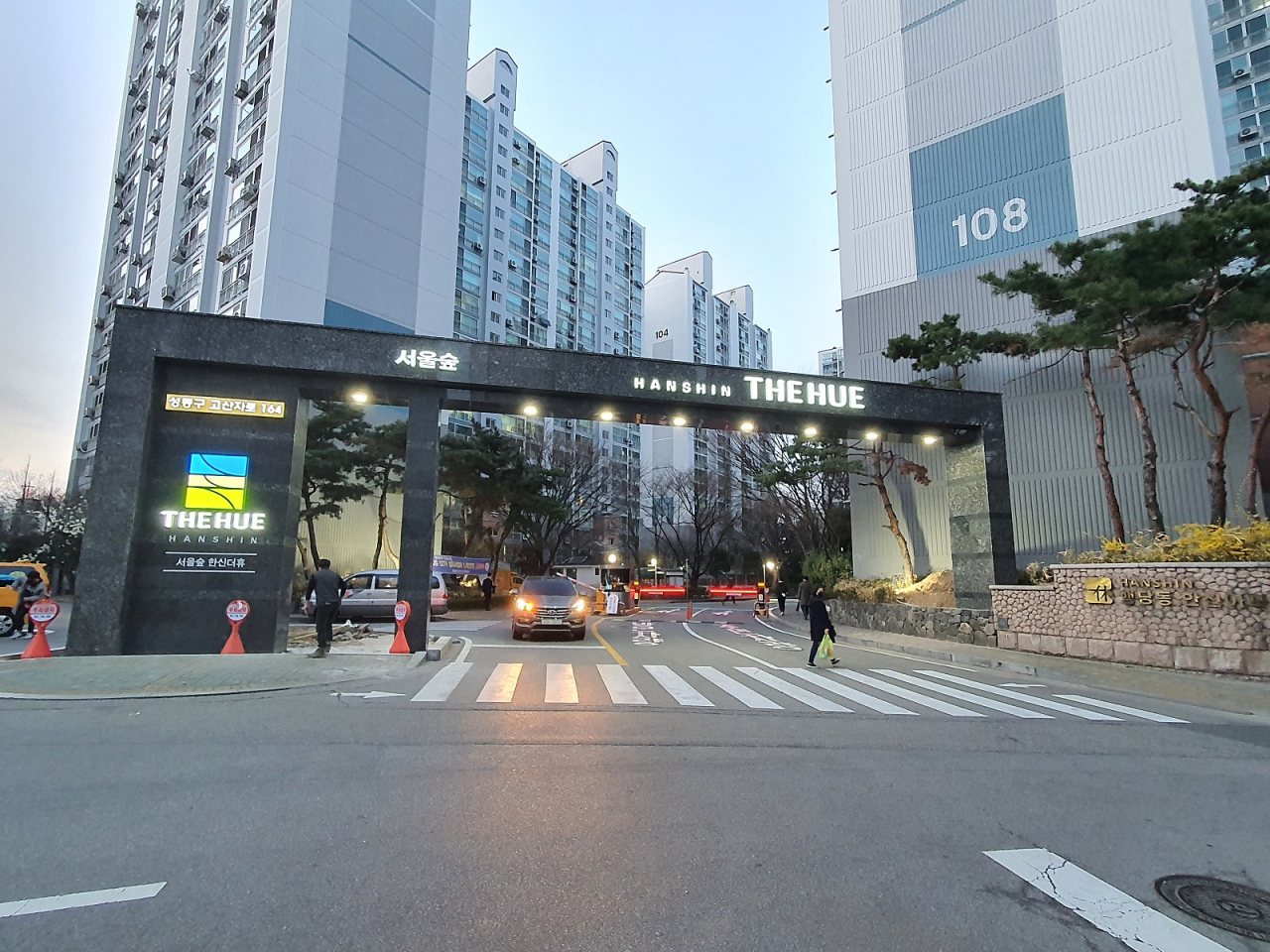 “The cost of building a front gate depends on its design and materials, but it typically costs about 100 million won,” said a 37-year-old real estate agent surnamed Lee, who runs an office in Yongsan-gu, Seoul. The cost is typically covered by the complex’s long-term maintenance fund, to which unit holders are required to contribute every month, he said.

And for apartment constructors, an awe-inspiring front gate is a plus for its brand image.

“Since most apartments in Korea are cuboid, many construction firms have been using a front gate as a means to make their apartment complexes stand out among many others. An apartment’s luxurious front gate with its brand name can leave a strong first impression on potential home buyers and promote its image as a premium apartment,” said an official at a construction company DL E&C.

The company plans to build a new apartment complex named Acro Dereve 372, in Bukgajwa-dong in western Seoul's Seodaemun-gu district, equipped with a whopping 530-meter-long gate structure that stretches from the main entrance of the complex to its commercial buildings on both sides, by 2025.

An artist's rending of Acro Dereve 372, a new apartment complex that DL E& plans to build in the Seodaemun district of western Seoul by 2025. (DL E&C)

The early designs featured much smaller structures, with stone statues engraved with the name and logo of the apartment complex, installed at the sides of the main entrance. 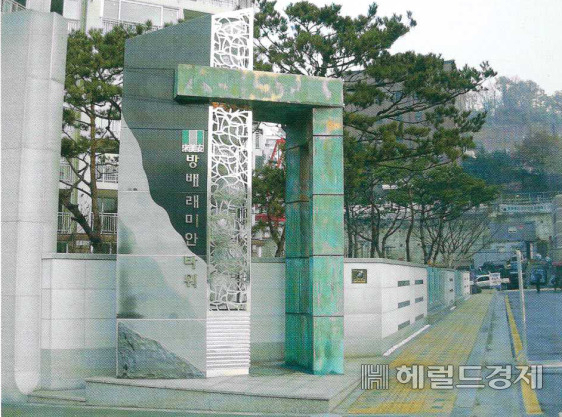 A stone statue at the entrance of Bangbae Raemian Tower in southern Seoul, an apartment complex built in 2005 by Samsung C&T. (Samsung C&T)

On the back of the growing popularity of name-brand apartments, the gates’ appearance continued to increase in size with more sophisticated, and often costly, designs.

Nowadays, more emphasis is given to gate structures and their role in creating an impression of the complex as a superb, premium living complex, residents and experts said.

In Korea, where many live in apartment complexes, which often account for the lion’s share of one’s assets, how a complex looks to visitors matters a lot, said Baek, a 38-year-old housewife residing in Banpo Central Prugio Summit Apartment.

“I think sometimes (the apartment you live in) works as a measure of your social standing. A luxurious apartment gate reflects people’s desire to show off wealth,” she said. 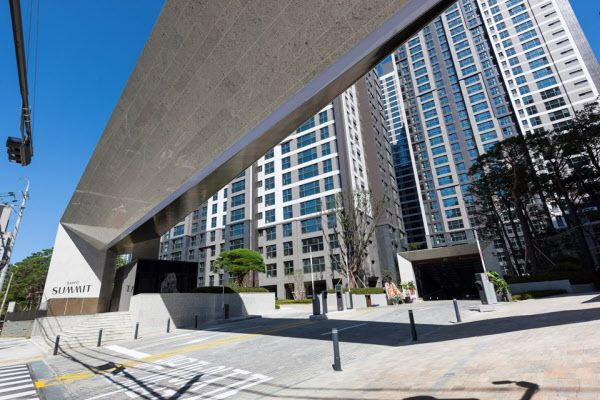 “Besides its aesthetic value, an apartment complex’s large, luxurious front gate gives people an impression that it is not an ordinary apartment, helping to build a premium image and value,” he said.

Builders and residents spending a generous amount of money to build an impressive entrance area is not a new phenomenon, according to Hyun Jang-taek, a professor of architecture at University of Seoul.

“A door served as a status symbol for many ancient Koreans as seen in the name boards and verse plaques found on royal Joseon buildings. A door’s deep-rooted symbol of wealth and fame met Koreans’ craze for apartments, giving rise to high-end apartment gates,” the scholar said.