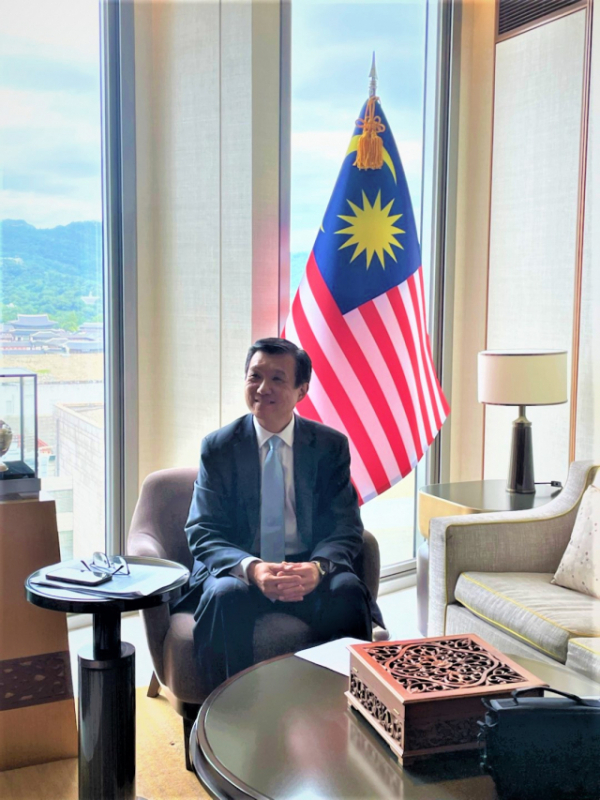 Citing Keluarga Malaysia, an aspiration of the Malaysian government to forge unity and brotherhood to achieve development, and Korea’s national unity concept, Lim hoped to bring together the aspirations of Malaysia and Korea.

“Malaysia aspires to be a developed nation, it’s high time to forge ahead with the underlying policy of Keluarga Malaysia,” he said.

“This will help Malaysia and Korea achieve forward-looking destinations.”

According to Lim, Malaysia wants revitalize its Look East Policy framework, adopted in 1982 to attain social and economic development in Malaysia, and seek convergence with Korea’s New Southern Policy declared in 2017.

The LEP continues to be Malaysia's policy to engage with Korea, and would remain an area of sustainability and diversity, said Lim.

4IR policy refers to a guiding principle of the Malaysian government to stay ahead of the curve and harness the power of science and knowledge to achieve development, progress, and prosperity.

He suggested Korea partner with the Malaysian digital economy blueprint to accomplish inclusive, responsible, and sustainable socioeconomic development and come up with a technologically-advanced economy.

He said that e-commerce thrived in Malaysia during COVID-19 referring to Korea's CJ home shopping operations.

“We encourage more companies to operate in Malaysia and utilize Malaysia's digital ecosystem,” he added.

He said that Koreans are fascinated by Malaysia, and consider Malaysia a viable and conducive destination to put money into. 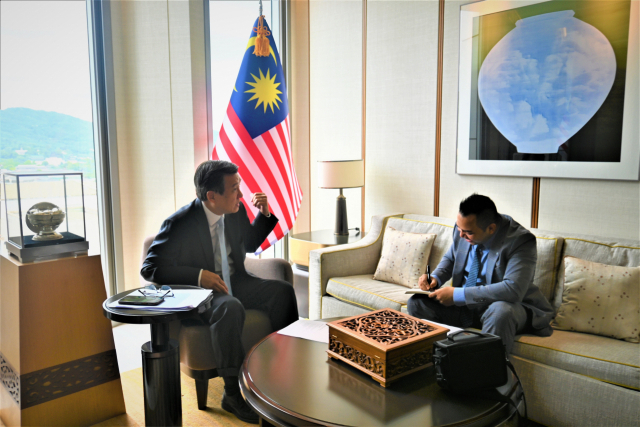 Malaysian Ambassador to Korea Lim Juay Jin is pictured during an interview with The Korea Herald at Malaysian Embassy at the Four Seasons Hotel in Seoul on Aug. 24. (Sanjay Kumar/The Korea Herald)
He applauded the Korean companies' role in modernizing Malaysia, and connecting different parts of the country citing Hyundai Engineering and Construction Co., which built Malaysia’s Penang Bridge, which was one of the world’s longest bridge of that time.

Lim highlighted ASEAN is emerging as the growth engine of Asia.

“Malaysia is the gateway to ASEAN,” added Lim urging Korea to leverage the strength and positive aspects of Malaysia.

Referring to five areas of cooperation in the ASEAN-KOREA free trade agreement, Lim underlined for 60 percent of the traded products, 65 percent tariff would be reduced with the inception of the Regional Comprehensive Economic Partnership (RCEP).

Lim said he hoped RCEP would facilitate Malaysia and Korea, and ease the export-import of South Korean products such as steel, automotive parts, textile, petrochemicals and chemical products.

Lim said that the Korean side would include 110 agricultural products that would contribute to mutually beneficial growth.

“RCEP will be a win-win for ASEAN as a whole and Korea,” Lim highlighted hoping RCEP to advance technical cooperation and digitization and contribute to sustainable economic development.

He recommended ASEAN as a huge market for EV batteries and other energy storage devices, and urged Korea to recognize the significance of a sustainable green economy in line with ESG initiatives.

Lim cited the example of SK producing core materials for EV batteries in Malaysia and suggested areas such as robotics, artificial intelligence, and smart cities as exciting and mutually reinforcing areas of cooperation between Malaysia and Korea that could lead to the economic development of ASEAN.

“Korea is in the first league, and ASEAN is set to follow Korea utilizing RCEP,” he said.

“Malaysia is looking forward to upgrading the relationship into a strategic partnership with Korea that would cover a wider range of sectors,” Lim said highlighting trade, investment, and economic cooperation to be the backbone of Malaysia-Korea bilateral relations.

He appreciated the success of Korean movies such as Parasite, saying the Malaysian entertainment industry was also moving quickly with enough room for cooperation with Korea.

“Korea is hugely popular in Korea and remains attractive to Malaysia despite COVID-19,”

He said that Koreans like to go to Malaysia for educational opportunities such as English education, international schools, and even for short-term courses for long time and golf tourism is also emerging as a new area.

“Malaysia offers a complete package for Koreans cheaper than Korea,” he said.