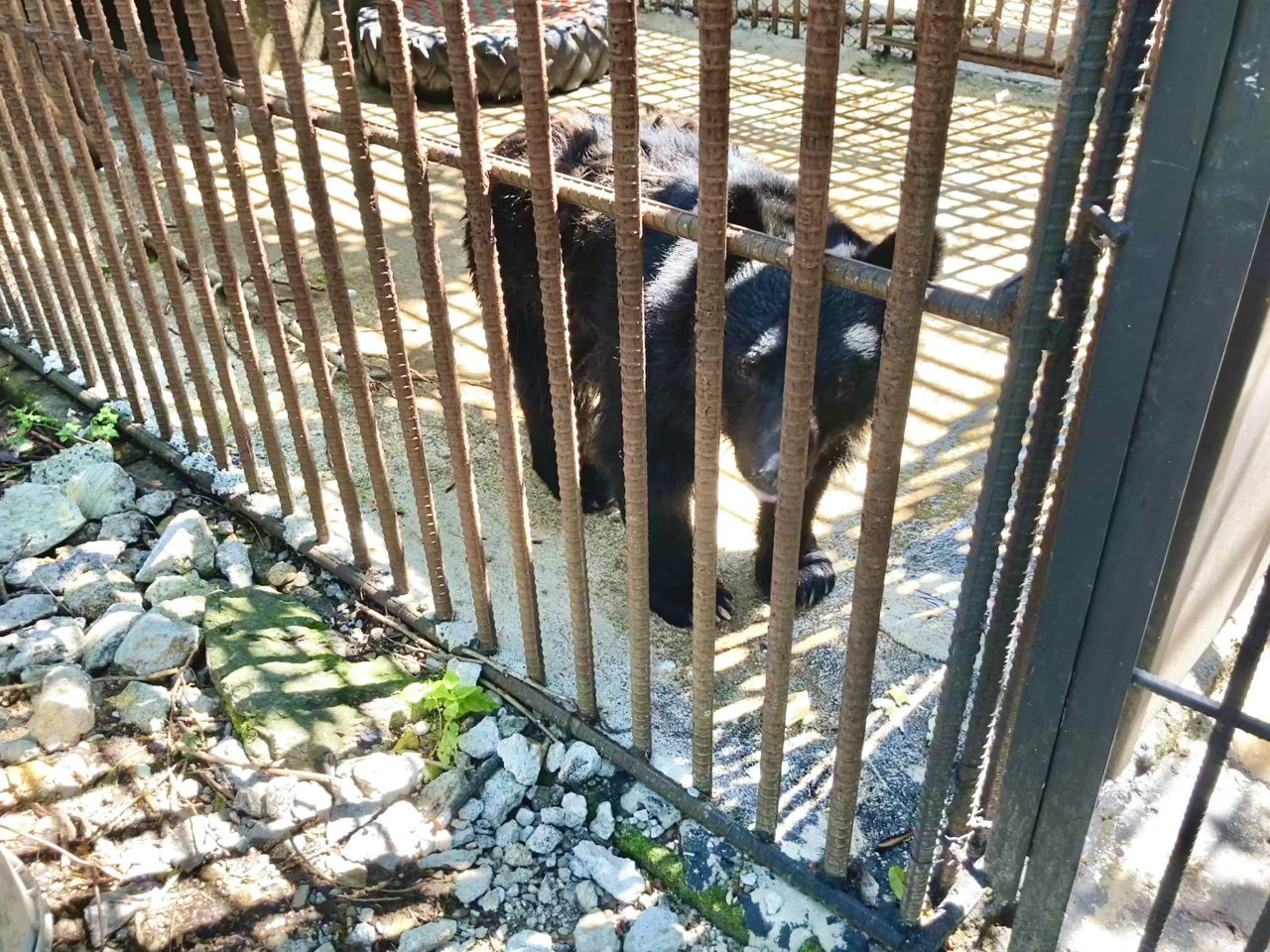 HWACHEON, Gangwon Province -- The practice of farming bears for their bile is being phased out, but hundreds of bears remain in cages with an uncertain future.

For the bears at bile farms, a three-square-meter cage is their entire world. Even for those rescued from a life of bile extraction -- done through syringes or catheters attached to their gallbladders -- their living conditions are not much better.

That is the situation for 13 bears at a bear bile farm in the mountain ridges of Hwacheon in Gangwon Province, and many more bears in and out of Korea.

The bears in Hwacheon were rescued by animal rights group Project Moon Bear in May 2021. But they still live at the farm where they were tortured, simply because they have nowhere else to go.

Korea's history of bear bile extraction goes back to the 1980s.

Back then, the Korean government encouraged the breeding of bears for bile. Farms got Asiatic black bears from Japan and other countries and raised them solely for bile extraction.

The brutal process stems from the belief that consuming bear bile is beneficial for liver health, and like many other things, good for stamina.

Bear bile dropped out of fashion as modern medicine became more widely available and awareness of animal rights increased, but it is still closely seen as a medicine for the liver.

Even to this day, a local pharmaceutical company manufactures liver pills named Ursa, which contains ursodeoxycholic acid, a substance found in bear bile. The company does not actually use bear bile extract but it uses an illustration of a bear to promote the product.

When The Korea Herald visited the bear farm in Hwacheon on Aug. 21, the bears were seeking refugee from the heat, climbing into rusty water troughs, which were too small for the big mammals.

These bears were saved from bile farming -- the local rescue group purchased the bears from the farm owner who has fallen ill -- but they still have nowhere to go.

The bears, each around 20 years old, are the descendants of bears imported from Japan in the 1980s. No one knows how old the bears are exactly, not even the farm owner, simply because no one has kept records.

“I was in this industry for more than 30 years,” said the farm owner, who wanted to remain anonymous. For him, this was the family business. His father, who owned a deer farm, started the bear bile business in the 1980s when the government promoted the practice and eventually passed it on to his son.

“I am now too sick to take care of these bears but I could not kill them,” he said.

The farm owner is legally allowed to kill the bears to close down the business: The current law allows farm owners to slaughter bears that are more than 10 years old. Instead of killing the bears, he contacted Project Moon Bear and asked them to take the bears.

“Someone has to take care of these creatures,” he said, helping the volunteer workers care for the bears.

According to Choi Tae-kyu, a veterinarian who leads the rescue group, many bear bile farm owners want to give up their businesses. As bear bile has gone out of fashion, the business is slow and the bears are a burden. Many want to get rid of the bears -- which are no longer profitable.

Choi took interest in the bears many years ago when the Environment Ministry worked to neuter bears from 2014 to 2017.

“I thought it was weird. The neutering is not really for the bears. Of course, it is necessary in some aspects but I thought someone should take interest in these bears and look at things from their point of view,” Choi said. 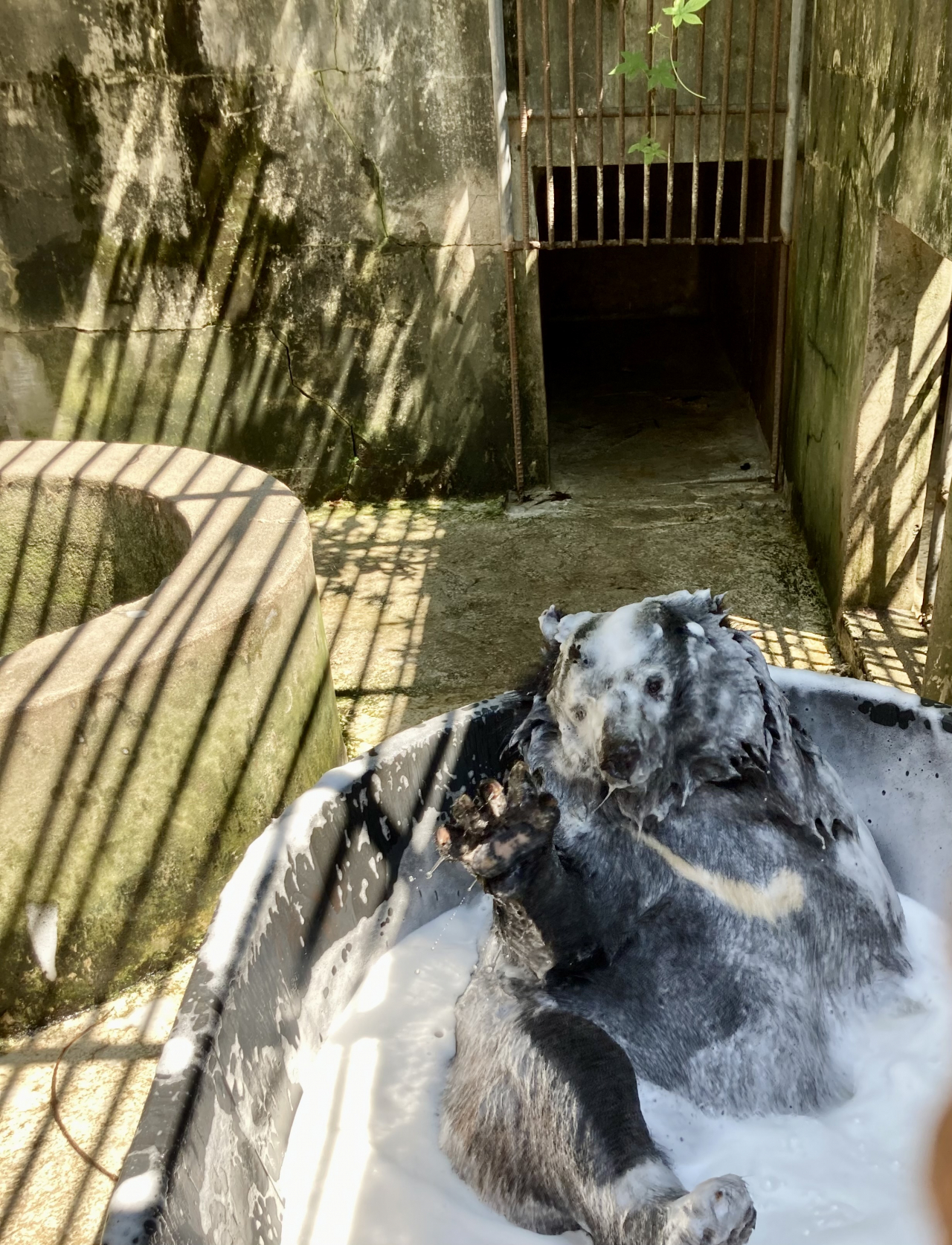 Bear U1 takes a bubble bath for the first time.

Farming bears for bile will effectively become illegal on Jan. 1, 2026, but holes remain in the measures aimed at facilitating the phase out.

The Ministry of Environment is currently building two sanctuaries, one in South Jeolla Province, scheduled for completion in 2023, and the other in South Chungcheong Province, set to be finished in 2025. Until the farms open and accept bears, those who have already been rescued have nowhere to go.

The capacity of the two sanctuaries is also smaller than the number of bears currently at farms, and the task of securing bears to be housed at the sanctuaries has been left to civic groups.

According to Park So-young, the director of the Biodiversity Division under the Environment Ministry, the two sanctuaries will be able to hold up to 120 bears but there are about 360 bears at farms across Korea. The ministry expects the population to drop to the 200s by the time the public sanctuaries are ready to take the bears in, as 50 to 100 farm bears die each year.

“We have been keeping a track on the number of the bears and we think the number will reach around 200 by the time [the sanctuaries open]. We will try to take in as many alive bears as we can through temporary accommodations and more,” Park said.

The ministry, however, underlined that it would be the responsibility of civic groups to secure -- in other words, purchase -- these bears from farm owners, who can legally keep them until the 2026 ban comes into effect. The ministry’s responsibility will be limited to the construction and management of the sanctuaries.

Or if they are lucky -- extremely lucky -- the bears could be sent to overseas sanctuaries, like the 22 bears that were sent to a sanctuary in the US state of Colorado in March.

With the help of animal groups and related authorities, 22 bears rescued from a Korean bear bile farm found refuge at the Wild Animal Sanctuary, a 95-hectare natural habitat located in the southwest of the US.

“They are all healthy and happy and are getting used to having incredible freedom to move about their new home in Colorado,” Executive Director Pat Craig said.

According to Craig, the bears had to spend the first month upon arrival inside small introductory cages, getting used to the new environment.

“Yet, when the time came to start releasing them into the habitat, the bears were confident and willing to explore the space that surrounded their initial holding enclosures,” Craig said.

He added the sanctuary would be open to receiving more rescued bears as long as the cost of their transportation is worked out. It took up some 1 billion won ($723,743) in total for the 22 bears to travel across the globe and find a new home.

However for the bears that remain here, though they are soon to be saved from the torture of bile extraction, the future is not exactly rosy.

The bears at the Hwacheon farm were circling inside the cages stopping only to eat -- typical behavior seen in animals locked up at zoos. But even worse, these bears do not even have a yard that they can step out into.

The volunteer workers visit the farm every week to care for the bears. At snack time, they prepare watermelons, honey, tomatoes and more fresh fruit for the bears. For these bears -- who have been eating dog food their whole lives -- the fresh fruit is certainly a treat.

It is also the only thing that occupies the bears -- who spend their days alone with nothing else to do but to walk around in their barren cages.

The rescue group is working on building a small yard for the bears at the farm. Though the yard will not be big, it can be a place where the bears can enjoy a breath of fresh air and learn to live with other bears, facing each other properly without the bars of a cage for the first time.

“It is a job someone must carry on. It is not easy but it needs to be done,” Choi said. “I always stress that this is at no one’s fault. But the bears are being sacrificed every single minute. We have to do something.”