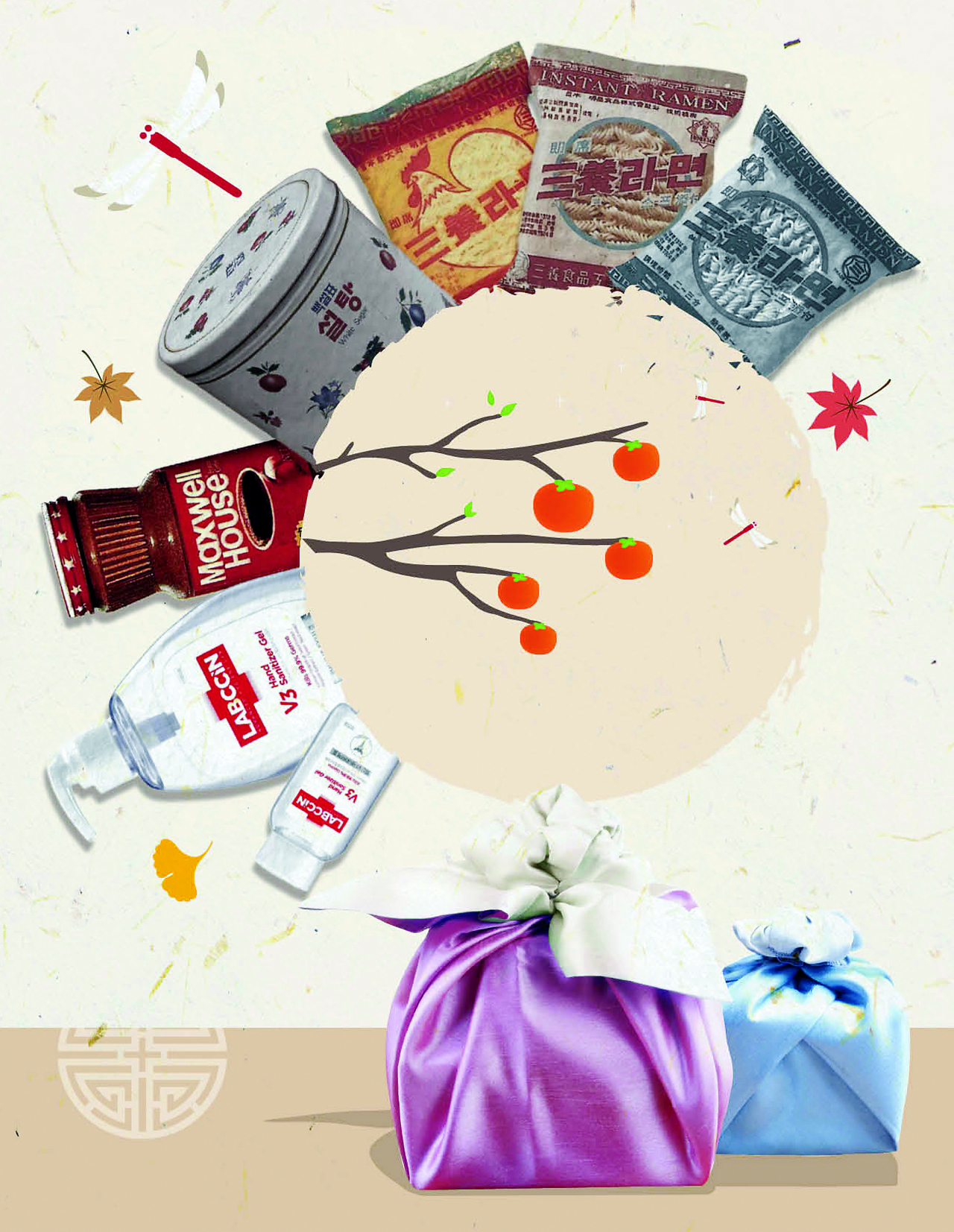 Chuseok gift items, both affordable and expensive, were necessities that people cherished the most. They were Korean instant noodles and sugar in the 1960s and instant coffee in the 1970s. This year they are hand sanitizers and fruit packages, amid the ongoing COVID-19 pandemic and rapid inflation. Illustration by Park Ji-young
Shin Jeong-eum, a 61-year-old Seoulite, remembers her childhood when her family was delighted with beef wrapped in a simple paper package and a carton of eggs held together by straw as Chuseok gifts.

As for her, Shin's favorite moments in the 1970s were receiving new clothes from her relatives as they celebrated the traditional mid-autumn harvest festival, honoring their ancestors.

“Nowadays, it’s all about gifting luxury items and we can just send the gifts after purchasing them through mobile platforms such as KakaoTalk,” she said wistfully.

Shin, who is from a generation that continued to struggle in poverty some two decades after the 1950-1953 Korean War, is a witness to how changes in Chuseok gifts throughout the years reflect Korea’s journey from a war-torn country to Asia’s fourth-largest economy.

In the late 1950s, the best gifts to exchange during Chuseok were basic necessities such as eggs and flour, which helped families and neighbors weather through extreme poverty following the war, according to archived news reports.

As the 1960s came around, Korea quickly entered a period of industrial revolution under President Park Chung-hee. Industrial factories were established and spread across the country, making Korean instant noodles, or “ramyeon,” soap, sugar and seasonings the most popular holiday gifts.

Chuseok gifts became more diverse in the 1970s as manufactured goods became more common. Soap and toothpaste -- which remain an option for gifts nowadays -- were handed out to family members and friends. Children often received new clothes from their relatives.

But it was the introduction of instant coffee that rattled the Chuseok gift market for the decade. Instant coffee, which is now available in individual sticks for a single cup, was sold in large bottles at the time. It became the most coveted drink for both households and office workers when meeting with guests and friends.

The modern trend of gifting luxury items during Chuseok was birthed in the 1980s and the 1990s with the growth of department stores. Korean beef, or “hanwoo,” ginseng, honey and department store gift vouchers topped the list and continues to do so today.

During the 2000s and the 2010s, electronic devices such as cellphones and MP3 players were added to the list. Vitamins and supplements were also gifted, as Koreans became more interested in living longer and healthier lives.

Today, the rapid growth of e-commerce platforms and the messaging app KakaoTalk -- which allows its users to purchase gifts on the platform -- has morphed the Chuseok gifting market into a more tech-savvy form. South Korea’s popular discount chain Homeplus said earlier this week that its online sales of Chuseok gifts sold from July 21 to Aug. 31 increased 19 percent on-year, while its offline sales gained 11 percent in the cited period. Korean beef was a popular choice among online buyers, with online sales alone nearly doubling. Sales of fruits jumped 43.5 percent online in the same period.

While favorite gift choices remain beef and fruit, the list has been diversified to include hand sanitizers due to the COVID-19 pandemic -- and even stocks.

“In the past, the focus was on gifting agricultural goods, but now the gift list has changed to stocks and electronic devices,” Kim Dae-jong, a business professor at Sejong University, said in a phone interview with The Korea Herald.

“The changes show South Korea’s growth from an impoverished, war-torn country into a nation with a gross domestic product per capita of some $35,000. Nowadays, I buy Apple and Tesla stocks for my kids to help them better prepare for the future,” he added.

Local brokerages in recent years have been providing easy ways to gift stocks to families and friends. Last year, NH Investment & Securities launched a special Chuseok event allowing its customers to gift the stocks they own to another person only by submitting the recipient’s name and phone number on its mobile trading system. Shinhan Investment provides a service via KakaoTalk where its customers can gift overseas stocks like mobile gift cards.

The new stock gifts reflect a rapid expansion of Korea’s equity market. The benchmark stock index Kospi was launched by the nation’s sole bourse operator Korea Exchange on Jan. 4, 1983, three years after the base value of 100 was decided. It kicked off trading at 122.5 points with 328 listed firms on the market, while investors’ trading volume marked about 59 trillion won ($42 billion). After 38 years, it passed the 3,000 point-mark in early 2021. It currently hovers at around 2,400 points, hit by the US Federal Reserve’s aggressive rate hikes, with its total market cap adding up to over 2,000 trillion won.

Overall, the Chuseok gift market here alone has grown into a 1.2 trillion won industry as of 2018, according to market researcher Nielsen Korea.

According to other experts, high inflation is another key factor that affects the gift list. Korea’s central bank forecasts an annual inflation of 5.2 percent for this year, marking the sharpest since 1998, when the nation was struggling under the strain of the 1997 Asian financial crisis.

“Expensive fruit and quality beef are especially popular this year because people want to give gifts that have become difficult to enjoy on a regular basis, as their prices have risen amid inflation,” said Lee Eun-hee, a consumer science professor at Inha University.