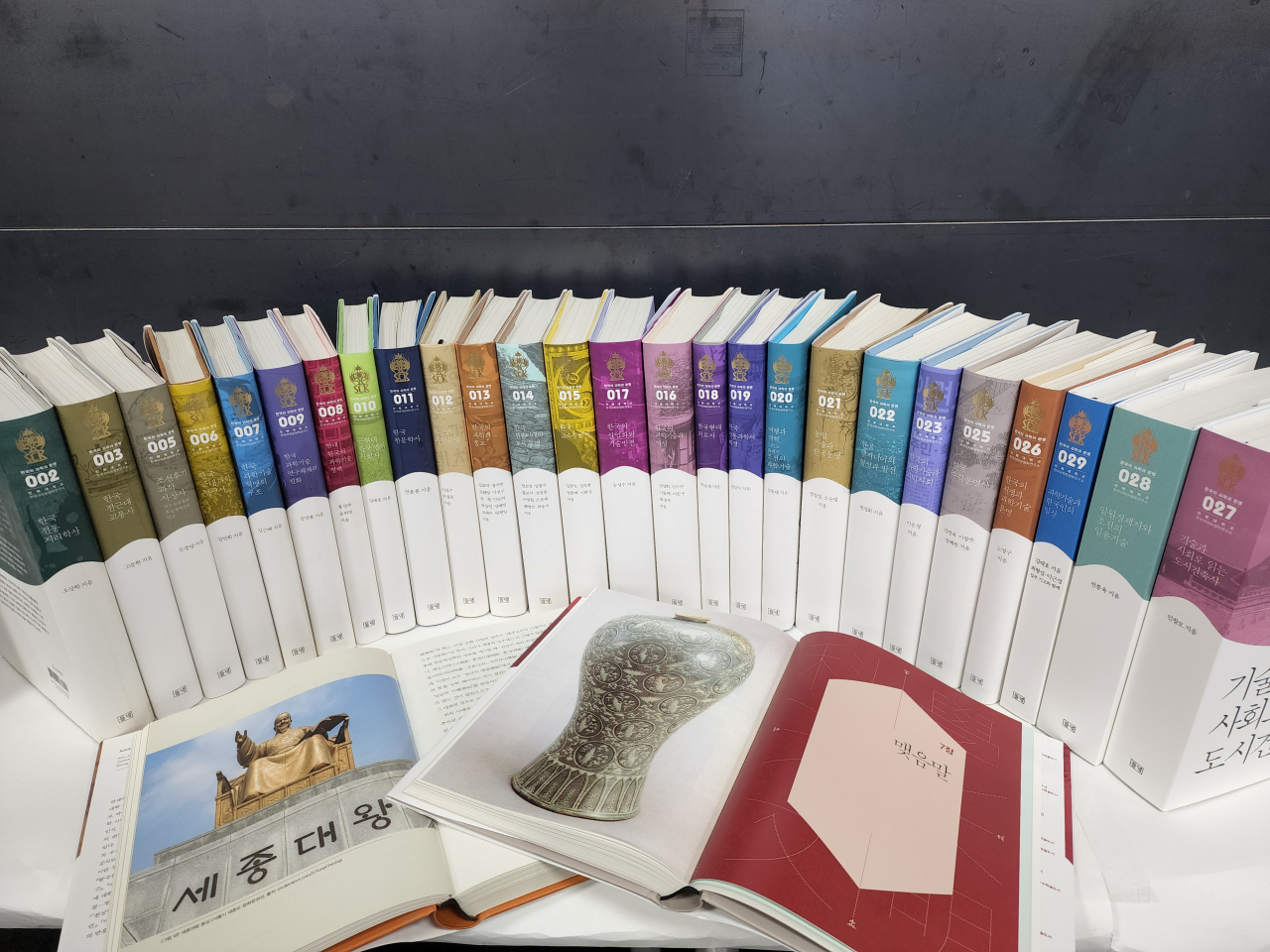 Thirty volumes of “Science and Civilization in Korea” are on display during a press conference, held at the National Museum of Korean Contemporary History in Seoul, Wednesday. (Hwang Dong-hee/The Korea Herald)

A 30-volume “Science and Civilization in Korea” series encompassing the country's history and achievements in the fields of science and technology has been published in August.

The series spans the pre-modern period to modern times -- 16 volumes on pre-modern and 14 on modern and contemporary times. The subjects range from specific topics, such as Hangeul, rice, religion and women, as well as major fields of science such as astronomy, engineering and mathematics.

More than 60 scholars participated in the project organized by the Korean Research Institute of Science, Technology and Civilization at Jeonbuk National University.

“The project, which started in 2010, is now complete after 12 years,” said Shin Dong-won, the director of the research institute, during a press conference at the National Museum of Korean Contemporary History in Seoul on Wednesday.

Shin wrote the very first volume, “Donguibogam and the History of Medicine in East Asia” in 2015. "Donguibogam," which is regarded as one of the classics of Oriental medicine, is a Korean book by the Joseon period royal physician Heo Jun. 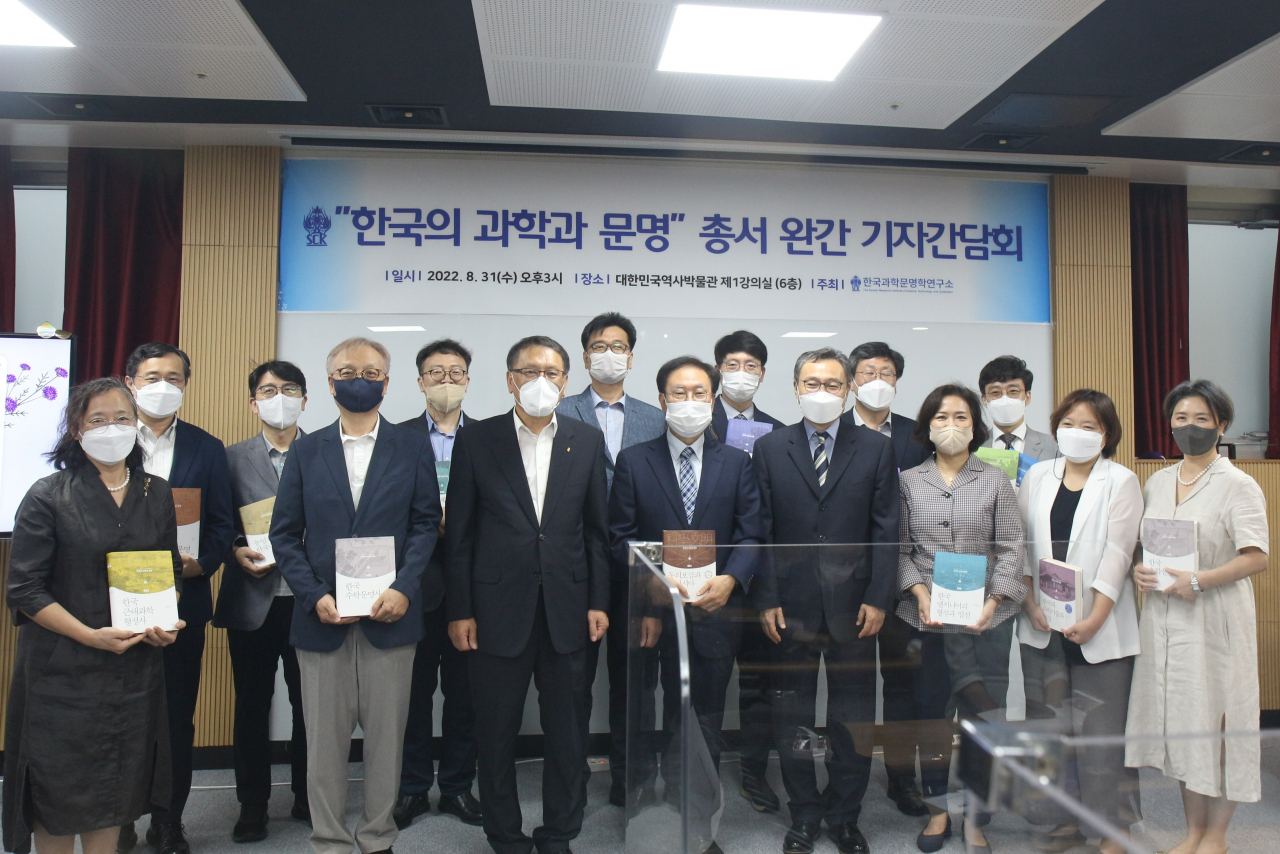 Reminiscing on 12 years of research and writing, the group of scholars said the most difficult aspect of the project was maintaining consistency throughout the 30 volumes.

Having published the Korean-language books, the team is now working on international editions.

“Currently we are nearing completion on six volumes in English, five of which will be published by the Cambridge University Press by 2023,” said Moon Man-yong, who oversaw the project schedule and wrote “The Evolution of Science and Technology Research Systems.”

The team leaders highlighted that the English editions are not direct translations of the Korean books, and have different content.

“After discussions with Cambridge University Press, we chose topics on the more traditional aspects of science, such as astronomy and medicine, and one book to show the more modern aspect,” explained Moon. “We have also signed (with CUP) to publish a second set of five, with which we will focus on more specific topics.”

The first English volume ‘P’ungsu: A Study of Geomancy in Korea’ (2018) was published by the State University of New York Press. 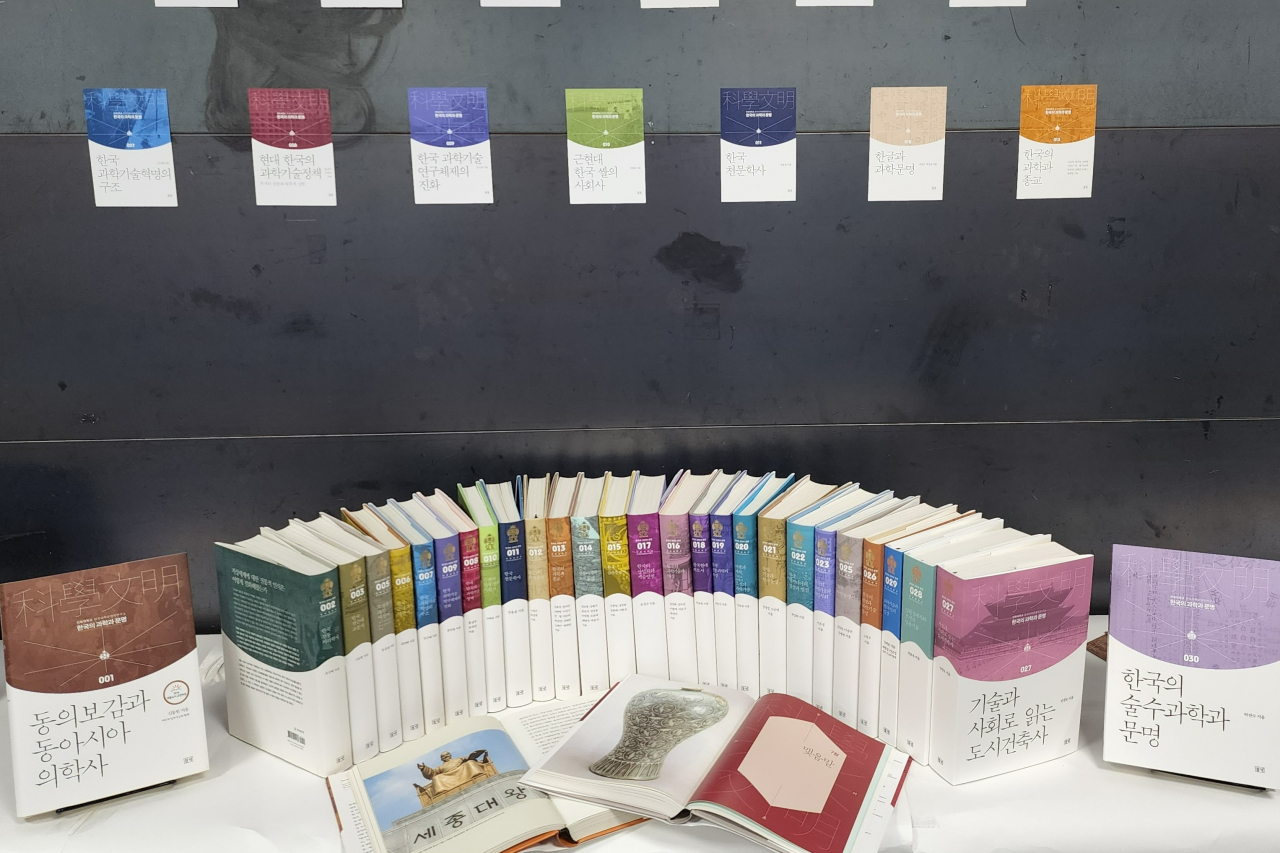 Thirty volumes of “Science and Civilization in Korea” are on display during a press conference, held at the National Museum of Korean Contemporary History in Seoul, Wednesday. (Hwang Dong-hee/The Korea Herald)

Although the series was inspired by Needham’s work, scholars underlined that their version on Korea is relatively easy to read because it was written with undergraduate students in mind.

“Some may be more difficult, some may be a little easier. But they are designed so that the general public can read the series,” said Shin.

The academics also noted the importance of balancing the humanities and sciences, because scientific advances were natural corollaries to cultural projects like the Tripitaka Koreana in the Goryeo Kingdom (918-1392) or to the reigns of King Sejong and King Yeongjo of the Joseon era (1392-1910).

“An interesting thing I noticed is that today people are not ashamed to know nothing about science. When a person doesn’t know Shakespeare, people say he is ignorant. But people are not bothered to know Newton’s laws,” said Moon.

“It is impossible to draw a clear line between the humanities and sciences. Both are important, and I cannot imagine how we can live without science or technology.”