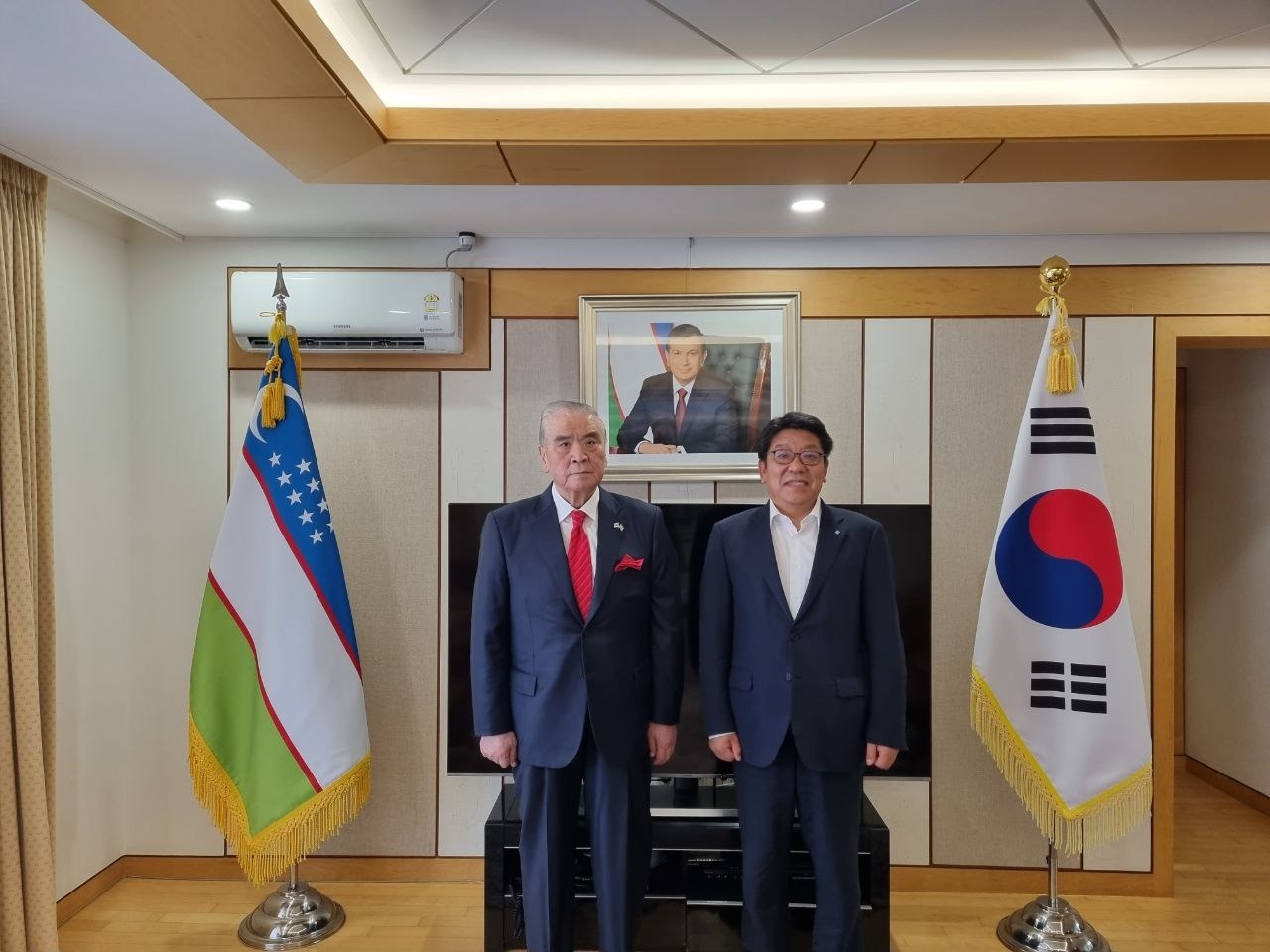 Uzbekistan Ambassador to Korea Vitaly Fen poses with The Korea Herald CEO Choi Jin-young at his residence in Seoul on Aug. 10. (Embassy of Uzbekistan)
On Sept. 1, Uzbekistan celebrates its 31st anniversary of independence, at a time the country has seen restoration of old values overlooked under the Soviet Union as well as growth in economic and social areas.

Ahead of Uzbekistan’s Independence Day, The Korea Herald spoke with Uzbekistan Ambassador to Korea Vitaly Fen at his residence.

KH: How do you assess achievements made in Uzbekistan’s 31 years of independence?

History of mankind shows that every nation has right to build life and future independently. It’s only possible, if the nation is free and liberated.

Uzbekistan’s independence -- achieved by incomparable courage and tenacity of Uzbek people -- is a global affair that made century-old dream a reality. Fundamental reforms initiated in Uzbekistan over last six years are of incomparable importance to the transition of Uzbekistan on modernization path, increasing efficiency of domestic and foreign policy, thanks to open and constructive foreign policy of President Shavkat Mirziyoyev.


KH: How has Uzbekistan-South Korea cooperation been developing recently?

Fen: Korea was one of the first to recognize the independence of Uzbekistan in 1991.

2022 marks 30th anniversary of Uzbekistan-Korea diplomatic relations, and 18 high-level meetings have been held reaching key agreements to develop political, trade-economic, cultural-humanitarian relations. Joint declaration on strategic partnership was signed in 2006, and relationship was upgraded to the level of Special Strategic Partnership in 2019. 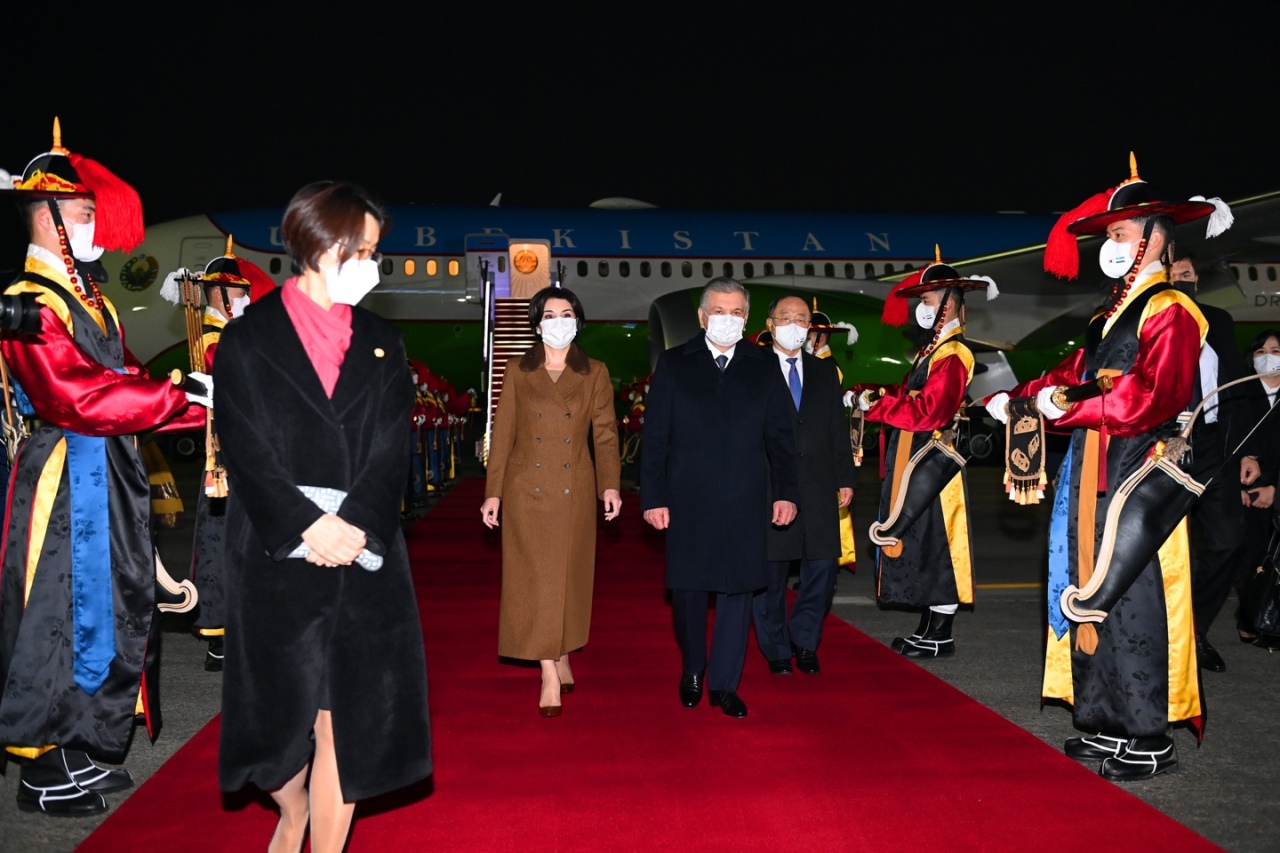 Uzbek President Shavkat Mirziyoyev arrives in Seoul for his visit to Seoul in Dec. 2021 . (Embassy of Uzbekistan in Seoul)
President Mirziyoyev’s state visit in December was historic due to significant high-level meetings, negotiations with Korean parliament and representatives of leading companies. Korea is vital trading and economic partner of Uzbekistan.

Trade turnover and numerous joint ventures almost doubled in recent years. Despite COVID-19, multifaceted relations continue to develop dynamically. Uzbekistan-Korea FTA to be signed in 2023 would increase and balance the trade indicators. Korean investments volume in Uzbekistan exceeds $7 billion. In 2022, $320 million has been disbursed, 20 percent more compared to 2020 to implement joint projects in chemical, petrochemical, textile, construction and agriculture industries.

Korean model of education -- one of the best in the world, completely reformed preschool education system of Uzbekistan. Innovative cooperation between universities in key areas to create permanent space for consistent communication. Forum of presidents of higher education institutions of Uzbekistan and Korea is to be held in Tashkent in 2022.

Also, 2022 would mark 85th anniversary of the Korean diaspora living in Uzbekistan. In 2021, President Mirziyoyev proposed to establish a museum of History of Koreans and a library at the House of Korean Culture and Art in Tashkent. Korea is time-tested and reliable strategic partner of Uzbekistan for economic, social changes and international issues.


KH: Please tell us about constitutional reforms in Uzbekistan. How do you think reforms would help Uzbekistan citizens?

Fen: Constitution is central for Uzbekistan and its people because norms of the reforms represent and serve interests of the people and state. State is ensuring rights, freedoms and legal interests of every citizen living in Uzbekistan. Constitutional reforms are a clear example.

Amendments are aimed to build “New Uzbekistan,” protect human rights and dignity at the level of basic law and strengthen social protection and economic well-being.

Wide-scale tasks defined to develop strategy of New Uzbekistan is to establish people-friendly state, effective provision of human dignity, rights and interests to create a new constitutional and legal space suitable for fundamental reforms. Hence, a constitutional commission of 47 members was formed to implement goals on the basis of “For Human Dignity,” to increase well-being, transform economic sectors, achieve rapid development of entrepreneurship and unconditional provision of human rights and interests under Uzbekistan constitution.

On July 20, 2022, a roundtable on “Constitutional Reforms in Uzbekistan” was held in Seoul. Delegation consisted of representatives of the presidential administration, Ministry of Foreign Affairs, Senate and legislative chamber of the Oliy Majlis with members of the Korean parliament, representatives of political, public, scientific and expert-analytical circles, presidents and researchers of leading universities of Korea, leadership of provinces and large cities and journalists in attendance.

KH: How has Uzbekistan elevated its regional and international stature recently?

Uzbekistan is strengthening its position regionally and internationally, particularly in Central Asia through the pragmatic and strategic foreign policy program led by President Mirziyoyev. Political situation in Central Asia improved radically and spirit of neighborliness formed in the region. In the words of President Mirziyoyev, the expression “the Spirit of Central Asia” appeared in world political science. Initiatives to hold regular consultative meetings of regional states leaders implemented.

According to UN estimates, 18 million people (almost half of the country’s population) is vitally dependent on humanitarian aid. President Mirziyoyev drew attention of the international community to more than half of Afghan children under 5 suffering from malnutrition in near future. President Mirziyoyev emphasized that isolating Afghanistan in current times with existing serious problems is impossible.

To ensure systematic, centralized and targeted delivery of humanitarian goods to Afghanistan and other countries, Termez Cargo Center logistics terminal in Surkhandarya region is used as international multifunctional transport and logistics hub for humanitarian assistance in accordance with the decree of President Mirziyoyev.

The international hub has all necessary infrastructure -- an international airport, a river port, a railway and highways connecting with Afghanistan. Also, one-of-a-kind large logistics terminal Termez Cargo Center, located in close proximity to Afghan border and equipped with most modern technology and equipment.

In February 2022, UNHCR sent 20 tons of humanitarian aid with basic necessities from Termez to Tajikistan as part of assistance for refugees from Afghanistan.