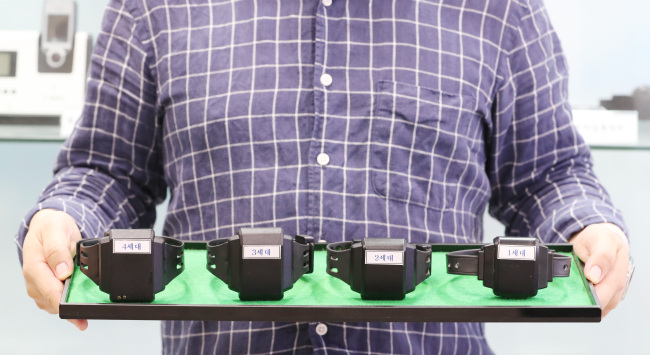 A Justice Ministry displays different models of electronic monitoring anklets that have been used since 2008 at the ministry’s head office in Seoul on Oct. 20. (Yonhap)

The justice ministry has proposed a law requiring convicted stalkers to wear electronic monitoring devices for up to 10 years, officials said Wednesday.

The ministry unveiled the proposal in a pre-legislation notice.

Currently, high-risk convicted murderers, sex offenders, burglars and child kidnappers are subject to the use of devices such as ankle bracelets, which use GPS technology to monitor the location of the person.

The move comes amid a rising number of stalking-related crimes despite the anti-stalking law that came into effect last October.

Under the new law, stalkers can face up to three years in prison or 30 million won ($23,000) in fines for stalking or repeatedly harassing an individual by approaching, following or blocking against his or her will. The law also stipulates that police can enforce emergency measures or temporary measures to physically separate stalkers from victims.

A total of 2,369 stalking-related crimes occurred in March, sharply up from 277 cases in November 2021, police data showed. (Yonhap)