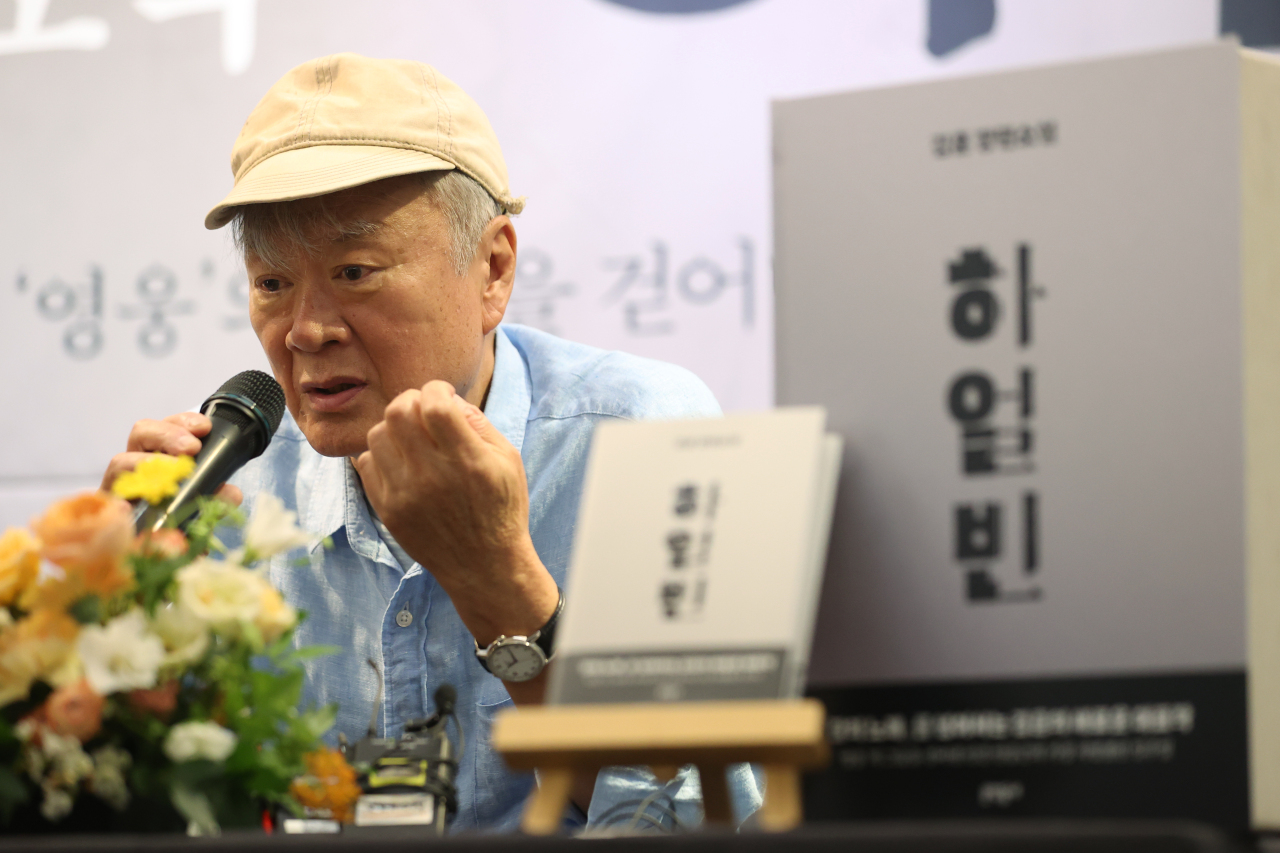 Korean novelist Kim Hoon speaks during a press conference held for the launch of his book, ”Harbin,” in Seoul on Wednesday. (Yonhap)

Recovering from an illness last year, Korean novelist and essayist Kim Hoon, 74, pondered about the rest of his life. One thing he realized was that he could no longer put off writing about independence activist An Jung-geun (1879-1910), which had been on his mind since his college days.

“I was busy making ends meet. And more importantly, I didn’t dare write about him,” Kim told reporters during a press conference on Wednesday.

Struck by a desperate feeling of now or never, he started writing “Harbin” on Jan. 1 and unveiled the 308-page novel on Thursday. “I had to compress the story to finish the book soon,” the author said, adding that readers might sense his haste while reading the book.

An Jung-geun -- more specifically, an interrogation report on him after he assassinated Hirobumi Ito, Japan’s first prime minister and the first Japanese resident-general in Korea, in Harbin, China, in 1909 -- had a great impact on him.

“I’m not a big advocate of reading many books, but I think books could occupy someone’s life as two pieces of writing did for me,” Kim said, “I couldn’t find a word to describe the shock I had upon reading the interrogation report.”

Another influential piece that shaped him was “War Diary” by Adm. Yi Sun-sin, the iconic Joseon-period naval commander. His second novel, the award-winning “The Song of the Sword,” is about Adm. Yi.

“Harbin” is a book about the historic figure, but Kim emphasized that unlike many literary works that deal with An’s patriotism and heroism, his book focuses on the activist’s youthful energy. “As if he’s alive right next to you, I wanted to describe his youth, his soul and his vitality,” Kim added.

The book was written in a few months, but he spent many months and years researching the people and materials. He also toured Japan to follow Ito’s tracks, even though the COVID-19 pandemic and his poor health prevented him from visiting China and Russia, which remains a great regret.

“I would write with confidence, when I feel like I know about the region to the core. But I lack that mastery (for this book),” Kim said.

The happiest moment while writing this novel was when An and his comrade, Woo Duk-soon, discussed how they would assassinate Ito at a shabby pub in Russia’s Vladivostok. “The two young men didn’t discuss a single thing about the just and great cause, the future plan or the costs of the assassination. Their decision was made as light as wind despite the agonizing times,” Kim said, adding that (the phrase) ‘youth is beautiful’ suits situations like this.”

In response to a question asking him to elaborate on the line, “Couldn’t trap him in his own era,” in the author’s note, Kim pointed to the situation in East Asia today where China has become a superpower, North Korea is armed with nuclear weapons and Japan is seeking to become a military powerhouse.

“It seems the current situation is more difficult to break through and riskier than An’s time,” the author said.

Therefore, An’s wish for peace in the region, stipulated in his “On Peace in East Asia,” which he wrote in prison before he was executed in March 1910, “resonates even more deeply now,” Kim noted. “On Peace in East Asia” is An’s unfinished thesis that aims to seek ways to resolve historical conflicts among Northeast Asian countries.

However, the former journalist said he doesn’t want his book to be seen as anti-Japanese or nationalistic, saying that nationalism is an ideology that is too romantic and weak to be used to unite the people or solve current issues.