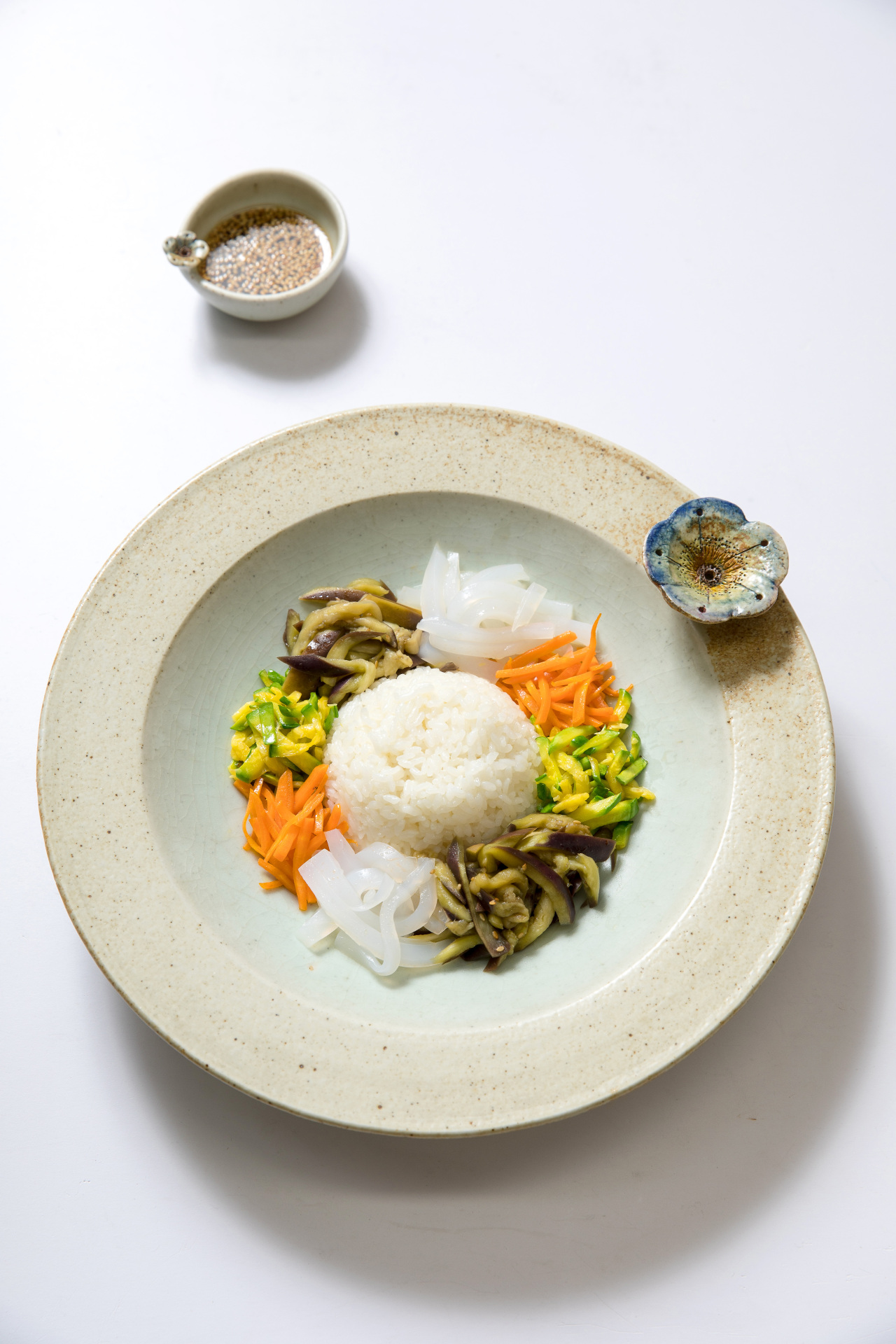 Bibimbap with eggplant. (Cultural Corps of Korean Buddhism)
The Ven. Hongseung has worked diligently for close to 30 years to popularize temple food. Along the way she often heard criticism from people who said “temple food has lost its tradition and become fusion food because of too much emphasis on popularization.” But she disagrees.

“I am not sure where the boundary between traditional food and fusion food is, but it could be a matter of ingredients. Vegetables like broccoli and paprika didn’t exist before in Korea. I use these ingredients frequently because I put importance on texture and color in my cooking.

“Whatever food it is, it must first please my eyes to make me feel like eating it. Although it is said that temple food is widely known, it is still enjoyed by only a limited number of enthusiasts. For greater popular appeal, temple food should be enjoyed by more people who deem it delicious. In the end, the distinction between tradition and fusion is meaningless as long as the food is in accord with the Buddhist spirit, I think.” Hongseung said.

As an iconic summer vegetable, eggplants are replete with nutrients, including anthocyanin, potassium and dietary fiber. By adding Korean zucchini, carrots and mung bean jelly, you have bibimbap with eggplant, a great dish with both color and nutrition.

1. Cut off the top of the eggplants right under the stem and peel them. Cut lengthwise in half and julienne.

2. Line a preheated steamer with a cotton cloth, put in shredded eggplants and let steam until the eggplants are tender. Take them out, let cool and mix well with the eggplant seasoning.

3. Julienne Korean Zucchini, sprinkle with salt and let sit a while. Squeeze out excess water and stir fry.

4. Julienne carrots and fry with salt.

6. Make sauce by combining all ingredients listed in the bibimbap sauce.

7. Put rice in a bowl and place prepared eggplants and other vegetables neatly around the rice. Serve with the seasoning sauce.

Temple food is food of the ascetics who express gratitude for all forms of life and wish for peace for the whole world. The Cultural Corps of Korean Buddhism operates the Korean Temple Food Center where guests can learn and experience temple food. -- Ed.