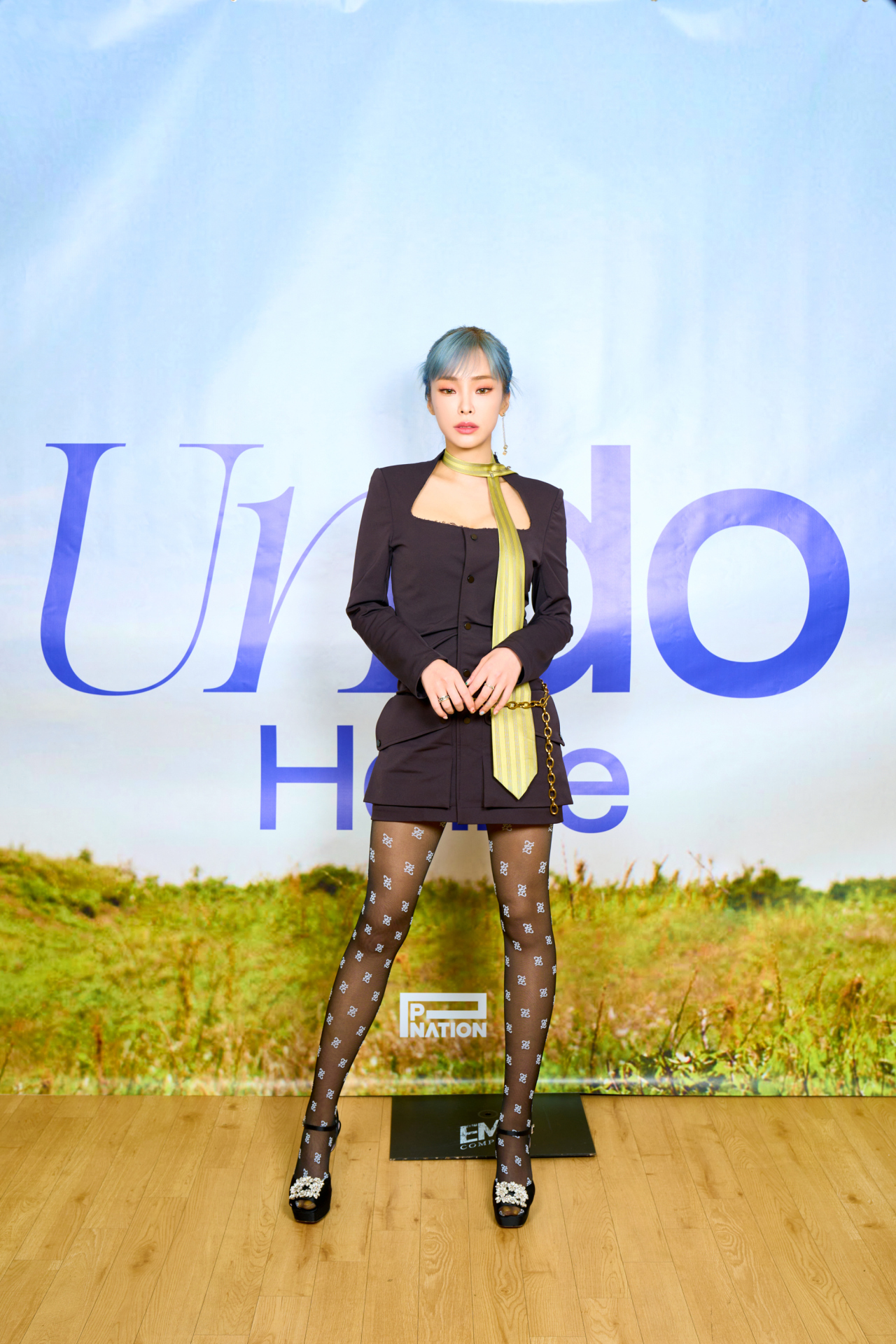 Heize holds a press conference for her second LP, “Undo,” in Seoul on Thursday. (P Nation)
The breakup queen is back, and this time singer-songwriter Heize is dropping a whole package of lingering post-love feelings and yearning to turn back time.

Returning with her second LP “Undo,” the first full-length album from the artist in three years, Heize said while the term “full-length album” itself weighs heavy on her shoulders, she was confident she could put together a whole studio set with that single theme.

“I’ve released singles and EPs until now, and although I could have turned those into full-length by adding a few more songs, I wanted to wait until the moment when I could actually weave together a whole LP with a single topic,” said Heize at a press conference ahead of the second LP, conducted in Seoul on Thursday. The event was livestreamed via YouTube.

While the album seems like a bag of love and breakup songs, the 29-year-old said it delivers a deeper message about the value of “now,” which is a moment we cannot come back to in the future.

“I defined ‘Undo’ in two phrases. It’s the moment that I so badly want to go back to but cannot never actually return to. That message is hidden in this album. I hope that this sentence and the songs can refresh people’s minds. We spend time aimlessly from morning to sleep, and I hope that this album will make people rethink about this moment right now which we will never be able to come back to.”

Leading off the 10-track album is the titular “Undo,” which Heize said is like a self-declaration that she will undo time to before the breakup and consider as if it never happened. The song tips to the emotions of relief coming after the end of a relationship, rather than the feeling of longing and missing.

“I’ve written many breakup songs and most of them were about the pain and grief. But this song talks about the emotions we face when our minds clear out, so the message itself will be different,” she said.

All the songs on the album -- barring the instrumental track “About Time” -- are based on the singer-songwriter’s own story.

“It’s all from my own experience. Rather than describing in words what had happened, I limned out the feelings I’d gone through. I was able to write some of the lyrics in a snap, as some stories just hit perfectly with my own memories.”

An all-rounder musician, Heize took a major role in producing the album. And to add some new sound to her music, she collaborated with four very new artists for the lead single and B-side tracks.

R&B singer George features on “Undo,” singer-rapper Giriboy appears on “I Don’t Lie,” Minnie of girl group (G)I-dle is on “Thief” and I.M of boy band Monsta X features on “Every Street.”

On how she selected the four artists, Heize said, “all of them popped into my mind as I wrote the songs. It was fun taking pictures with people that I’ve met for the first time.”

Heize said she’d been eyeing Minnie for a while for her unique voice, and out of coincidence, her company, P Nation, had also suggested the (G)I-dle member for the collaboration.

“Her vocal color is everything to the song. You’ll fall for her charms and voice with it,” she said.

While it was for his low, husky voice that Heize had chosen I.M for the collaboration, she said she found his real talent elsewhere.

“I listened to all his solo releases and I was attracted by his distinctively low voice, and he was good at rapping and all. But with this song, I found his true value -- he is a genius in writing lyrics. I told the company that ‘this is crazy’ as I shared his lyrics with the company,” Heize said.

Rather than striving to show something new, Heize said she hopes to keep up what she has now.

“Although it might seem tedious that I’m always singing about the same old breakup, I’m proud that I could be the artist in charge of that feeling. There are many songs about breakups, but not everyone gets the title ‘master of breakup,’” she said with a smile.

On her plans for this year, Heize said she hopes to hold a standalone concert.

“I want to hold my own concert and so does the company, so we’re trying to find the right date. Although I can’t say for sure, I’m thinking the concert should come around within the year. I don’t think it’s right that I haven’t had one while releasing two full-length albums and seven mini albums. I’ll try my best to make it happen.”