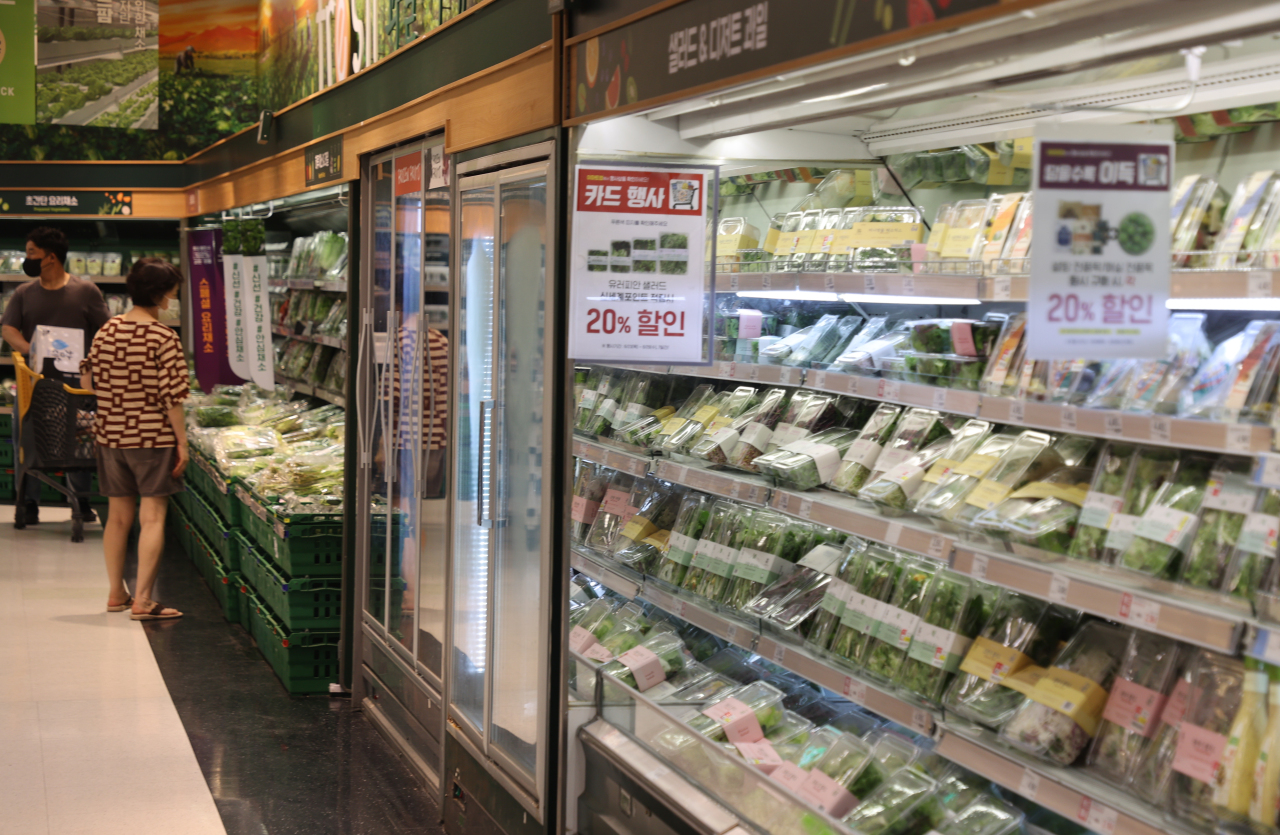 A supermarket in Seoul. (Yonhap)
South Korean consumers raised their outlook this month for where inflation will be in one year to the highest level in 10 years, a Bank of Korea survey showed Wednesday, reinforcing expectations that the central bank would be emboldened to back a steeper-than-expected rate hike in July.

In a monthly survey of 2,500 households conducted June 13-20, consumers forecast inflation to average 3.9 percent, up from the previous 3.3 percent in May. The monthly increase is also the largest gain seen since the bank began compiling data in 2008.

“The 0.6 percentage-point jump is a bit dramatic if we look at all the fluctuations in the past. The fact that more consumers watch news on soaring inflation and the US Fed’s big rate hike could be why that’s the case,” said Hwang hee-jin, a Bank of Korea official in charge of statistics analysis.

The survey found consumers bracing for higher borrowing costs ahead, with the index jumping to a record high of 149 from 146 seen a month ago. A reading greater than 100 means people bet more on a rate hike than a cut.

Meanwhile, consumers turned pessimistic about economic conditions in June for the first time in more than a year. The consumer sentiment index fell to 96.4 from 102.6 in May. The 100 mark separating optimism and pessimism was last breached in February 2021, when it dropped to 97.2

“A grinding war in Ukraine, economic deceleration in China, global rate hikes and surging prices all led to the monthly drop,” Hwang said. “Consumer demand is picking up after social distancing rules were scrapped but uncertainties still loom. We have to wait and see if the demand is really coming back.”

The fallout from the war in Ukraine and the US Fed’s rate hikes to come are some of the uncertainties or the changes in the global economy that the Korean economy could not handle in advance, Hwang added.

A week ago, the BOK chief blamed such changes as surging oil prices for persistent inflation, warning that the annual increase in consumer prices this year could top the 4.7 percent marked in 2008, the highest level in the last 20 years.

BOK Gov. Rhee Chang-yong, who did not offer a revised target the bank has eyes set on, said inflation will reach its peak in the third quarter, noting the July rate decision will be made after the bank studies more data then.

“Whether the bank would back a sharper rate hike depends on the consumer price index going public next week. If it reads 6 percent, I’d say more board members would get along with a steeper hike,” a senior Bank of Korea official was quoted as saying Wednesday in a local report.

The official was referring to a hike of 50 basis points, which would break with tradition of the bank changing the benchmark rate by just 25 basis points at once.

Analysts have said the July policy meeting would back the steeper raise, as part of what the bank has repeatedly said is a “proactive approach” to bring down raging inflation.