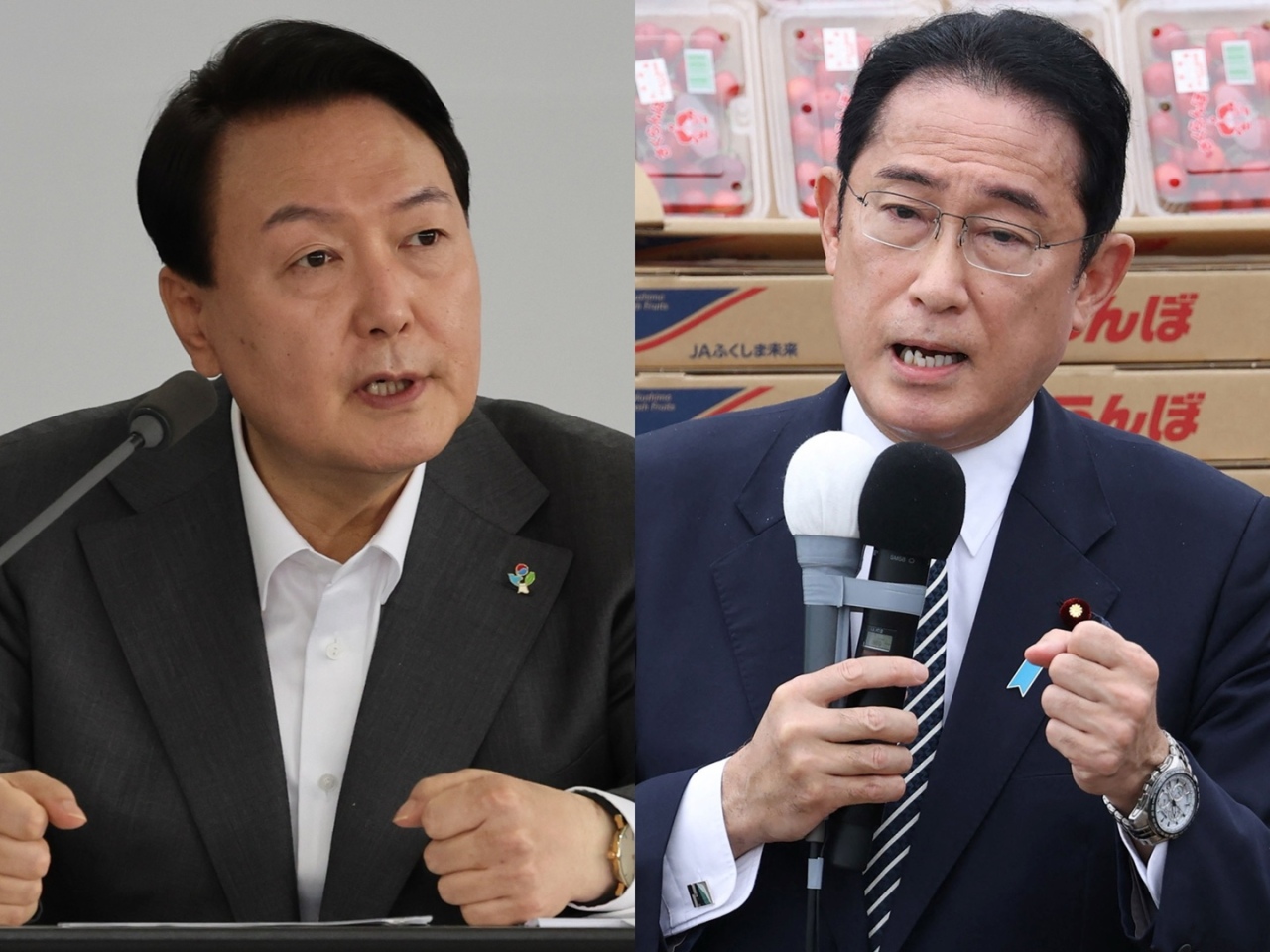 South Korean President Yoon Suk-yeol (left) (Yonhap) / Japanese Prime Minister Fumio Kishida (Jiji Press-Yonhap)
With Seoul and Tokyo picking up efforts to restore strained ties, eyes are on whether the sides’ leaders could make progress in an upcoming international conference that both are set to attend next week.

South Korean President Yoon Suk-yeol and Japanese Prime Minister Fumio Kishida have both said they will attend the NATO summit scheduled for June 29-30, where they will see each other in person for the first time; it has been less than two months since Yoon was inaugurated on May 10.

While nothing has been decided on whether the two leaders will hold their first official bilateral summit on the sidelines of the NATO summit, there would be some interactions, even in lighter formats, South Korea’s National Security Adviser Kim Sung-han said, Wednesday.

“It would be difficult to solely focus on Korea-Japan issues when we are in a foreign land.”

At the NATO summit, Yoon will present South Korea’s stance on North Korea’s nuclear provocations, woo support from the participating countries, and also hold some 10 multilateral summits with the leaders there, the security adviser explained.

Kim also stressed both Seoul and Japan are willing to resolve the issues that stand in between them, and that, they are coordinating on an equal footing.

The plan for the first official bilateral summit of Yoon and Kishida is seemingly being pushed back, as the Japanese prime minister is on the watch for an upper house election slated for July 10.

When a country has an election ahead, diplomatic issues can be used in domestic politics, according to Kim. “In that perspective, both sides are being cautious so that our bilateral talks are not intervened by domestic politics,” Kim explained.

As diplomatic issues between South Korea and Japan are sensitive and impact domestic politics, Kishida would not want those topics to dominate during the electioneering period, observers say. The official electioneering for Japan’s upper house election kicked off on Wednesday.

Seoul’s Foreign Minister Park Jin also appeared to pushed back his plan to visit Tokyo for first time in mid-June to avoid the election period. In his envisioned trip to Tokyo, Park is expected to meet with his Japanese counterpart and coordinate on the first presidential summit.

On the potential presidential summit of Korea and Japan, Park also hinted that Yoon and Kishida could have a chance for “meaningful” dialogue.

“Nothing has been decided yet. But I believe there will be an opportunity for the two leaders to meet and exchange meaningful words with each other,” Park said late Tuesday in a televised interview with TV Chosun.

If they do hold a bilateral summit, it would be the first to be held between the two countries in over two years.

Aside from a potential one-on-one meeting, Yoon and Kishida are expected to be in the same room for a trilateral summit with US President Joe Biden.

South Korea’s National Security Office also said it is reviewing Japan’s proposal to hold a quadrilateral summit to include Australia and New Zealand on the sidelines of the NATO summit in Madrid.

Seoul and Tokyo have been standing at odds over several historical and trade issues, under which disputes have escalated to plunge their ties to their lowest level in recent memory.

From May, when the conservative Yoon Suk-yeol administration came into office, the two neighboring Asian countries have been seen to increase bilateral exchanges, as both seek to bolster trilateral cooperation with the United States.

A series of pending issues remain to be addressed by the two sides. One of the major sticking points includes South Korea’s top court ordering a Japanese company to sell off its assets to provide compensation to Korean victims of wartime forced labor during the Japanese colonization period.

As the Japanese government continues to demand South Korea come up with a solution, Seoul is planning to launch a joint private-public consultation group to discuss the court’s ruling for the victims of forced labor.

Meanwhile the two sides have agreed to reopen the air route between Korea’s Gimpo and Japan’s Haneda airports that had been closed for more than two years due to the COVID-19 pandemic.

According to Seoul’s Foreign Ministry on Wednesday, the flight service between the two airports will resume on June 29, running eight times a week.