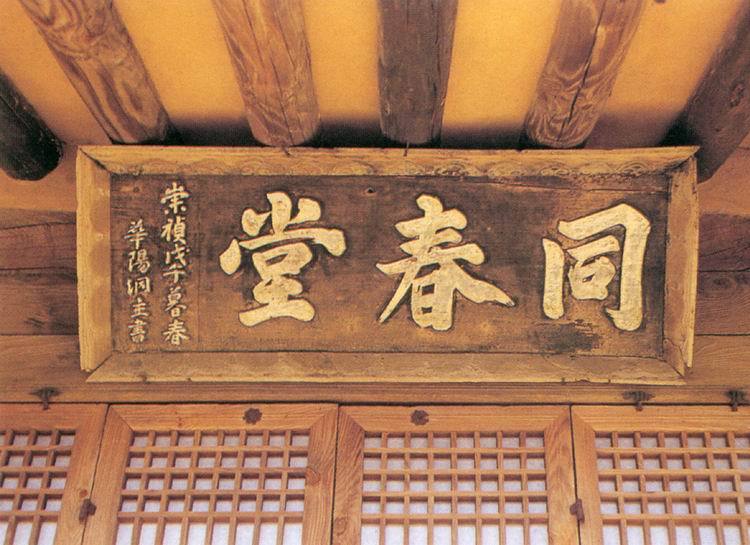 Signboard of Dongchundang, written by Song Si-yeo (Cultural Heritage Administration)
Although he was born in Jeongneung-dong in Seoul in 1606, Song Jun-gil came from an old Song family based in Eunjin-myeon in Nonsan, South Chungcheong Province, famous for its Eunjin Mireuk statues of Maitreya.

He built the Dongchundang house in his clan village of Hoedeok, which has been called “the land of virtuous scholars” since the time of King Taejo of the Goryeo Kingdom, and devoted himself to learning rather than entering the government, and died there.

Song has been recognized as the scholar who inherited the main line of the Giho school along with Song Si-yeol, his lifelong academic and political companion.

The name of the house, Dongchundang, which is also Song’s pen name, means a “house vibrant with life, like spring.” Spring signifies benevolence, the best of the four virtues: benevolence (in), righteousness (eui), propriety (ye) and wisdom (ji), since these human virtues pair with natural order like the four seasons from spring to winter in Confucianism. Spring corresponds to “in,” which humanizes people.

Song enjoyed academic exchanges and did not hesitate to accept differing views, although he was a great scholar in the field of Yehak, or the study of rites. In addition, Song demonstrated his warm personality at every moment of political decision. He sympathized with the unjust death of Prince So-hyun and his wife, Princess Kang, and insisted on their son’s right of succession to the throne although it was obvious that he would lose King Injo’s trust doing so.

In the midst of factional strife, Song was always cautious about harsh punishment against opponents with different political positions.

Song was one of the key figures involved in King Hyojong’s aspirational plan to attack Qing China to avenge the earlier invasion of Joseon. At the same time, he also emphasized the stability of the people’s livelihood. Song’s political philosophy is most evident in his appeal describing Joseon after the two wars of 1592 and 1636 as a “sick patient” in need of care first. It seems to have been hard for him to eat or sleep during a national crisis when he served as minister of national defense. 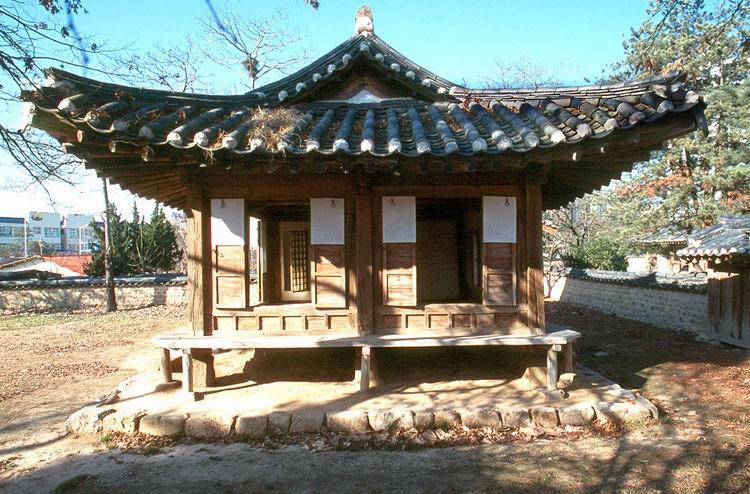 Dongchundang, Treasure No. 209, located in Daejeon (Cultural Heritage Administration)
Dongchundang, whose sign board was written by his lifelong friend Song Si-yeol, is designed so that its chimney is hidden from outside view, an expression of his character as a scholar who saw no virtue in comfort and rest.

Houses are an extension of the people who live there. Dongchundang appears to reflect the humble lifestyle and dignity of the great scholar with warm humanity, although no portrait of him remains. He forbade having any portraits of himself made.

Park Jeong-eon is a senior researcher at Chungnam Institute of History and Culture. -- Ed.