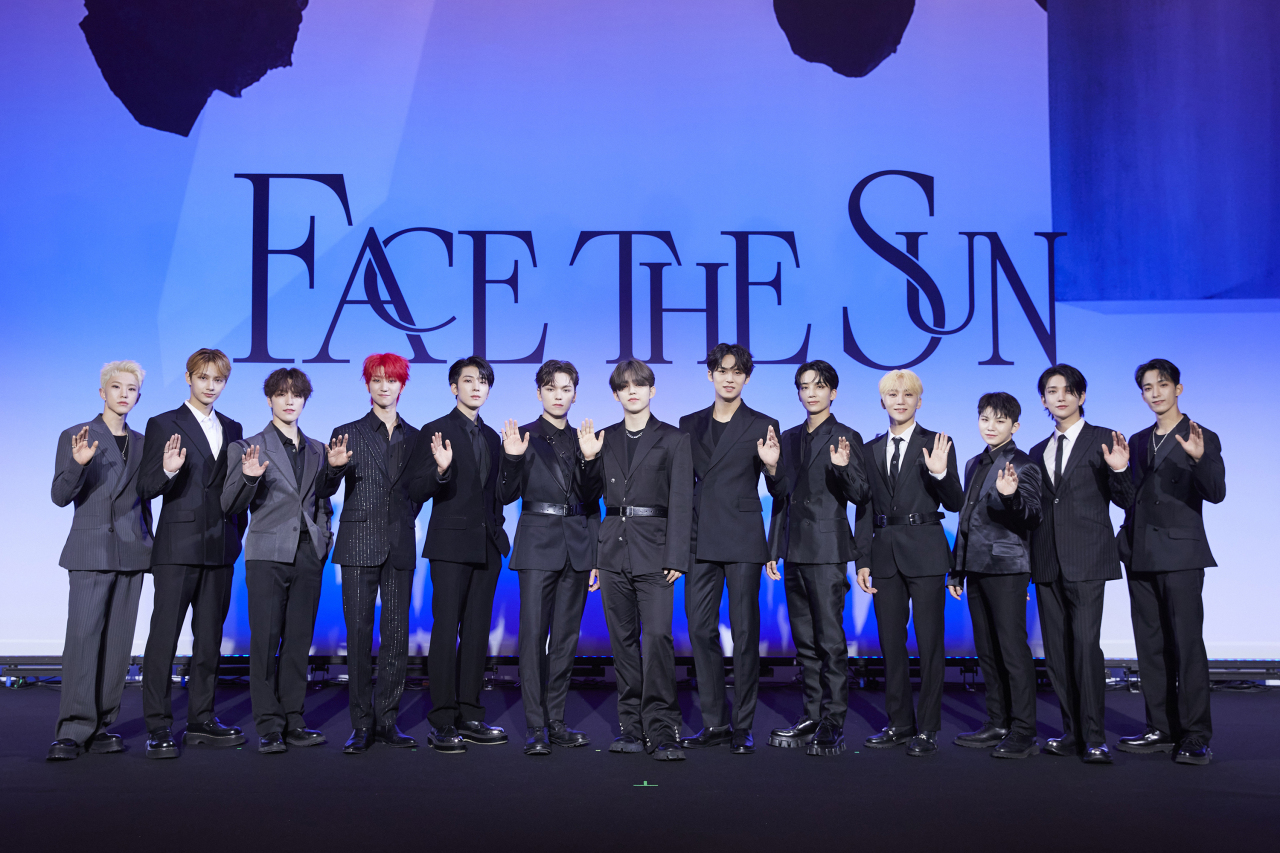 K-pop boy band Seventeen conducts a press conference for the act’s fourth LP “Face the Sun” on Friday at the Conrad Seoul hotel in Yeouido, Seoul. (Pledis Entertaiment)
Seven years is no short time when it comes to the lifespan of K-pop acts, especially if there are 13, or more, voices to mediate within the group.

Seventeen, a 13-member boy band, passed the point with not a single hiccup, and has officially set off on its second chapter with a new full-length album, “Face the Sun.”

Ahead of dropping the album on Friday afternoon, the band conducted a press conference at the Conrad Seoul hotel.

“We’re returning with a full-length album in two years and eight months, and we expect the album will be more significant as it is our first LP following our renewal of contracts,” the band’s leader S. Coups said during Friday’s event.

The new album is a nine-track package complete with only group songs. Without any unit and solo tracks, the band celebrated its special turning point together.

Vocalist and producing member Woozi took part in the overall production of the album.

“We decided from the very start on filling the album with just group songs. Although the units are also important, we thought it was important to express the honest thoughts inside us. It was a bold move, but we’re satisfied with the result,” Woozi said.

Woozi continued, “The album is complete with the sense and emotions of Seventeen’s music. It carries the message that we will overcome our innermost concerns, symbolized by the shadows, to eventually become a powerful being who can confront everything that we face without fear and stride forward.”

Fronting the package is the lead single “Hot,” a hip-hop genre infused with Western guitar sounds that resonate with Seventeen’s passion to prove themselves and become irreplaceable, like the sun.

“The song best resembles Seventeen. I try to embody the message that best shows our current state (in our songs), and the sun was just the element that could symbolize our existence and passion as we stand at the new starting point and also the goal we have set with this album,” Joshua explained.

Along with the title song, the album also includes “Don Quixote,” “March,” “Domino,” “Shadow,” “‘bout you,” “If you leave me,” “Ash” and the band’s first all-English lyric track “Dar+ling,” which was unveiled ahead of the album as a prerelease in April.

Seventeen’s comeback was bigger than ever this time, having racked up over 200 million in sales in preorders alone, rewriting the act’s own sales record. All five of the band’s previous albums have sold over a million units each, with “Face the Sun” marking their sixth consecutive million-selling album.

“We didn’t hope for the doubling in sales from the start. It was all possible thanks to our fans, Carat. We’re very grateful, and such achievements are what drives us when we work on our next album,” S. Coups said, referring to the band’s official fandom Carat.

On the goal with the fourth LP, Seungkwan gave a candid answer of wanting to be No. 1 on Billboard’s main album chart, Billboard 200. The band debuted onto Billboard 200 with its eighth EP, “Your Choice,” ranking at No. 1 on the chart, and peaked at No. 13 with the ninth EP “Attacca.”

“We’ve been knocking on the doors of Billboard since our last album ‘Your Choice,’ and we’d really like to nab No. 1 this time. We’d really, really love to get to the top just once,” Seungkwan said earnestly.

As bursts of laughter rippled throughout the crowd, Seungkwan continued, “Getting a Billboard No. 1 will be exciting, but what’s more important is just staying healthy with all the members together. We know how grateful this time we’re working together is. I suppose the one true goal that the members share is staying together for a long, long time.” 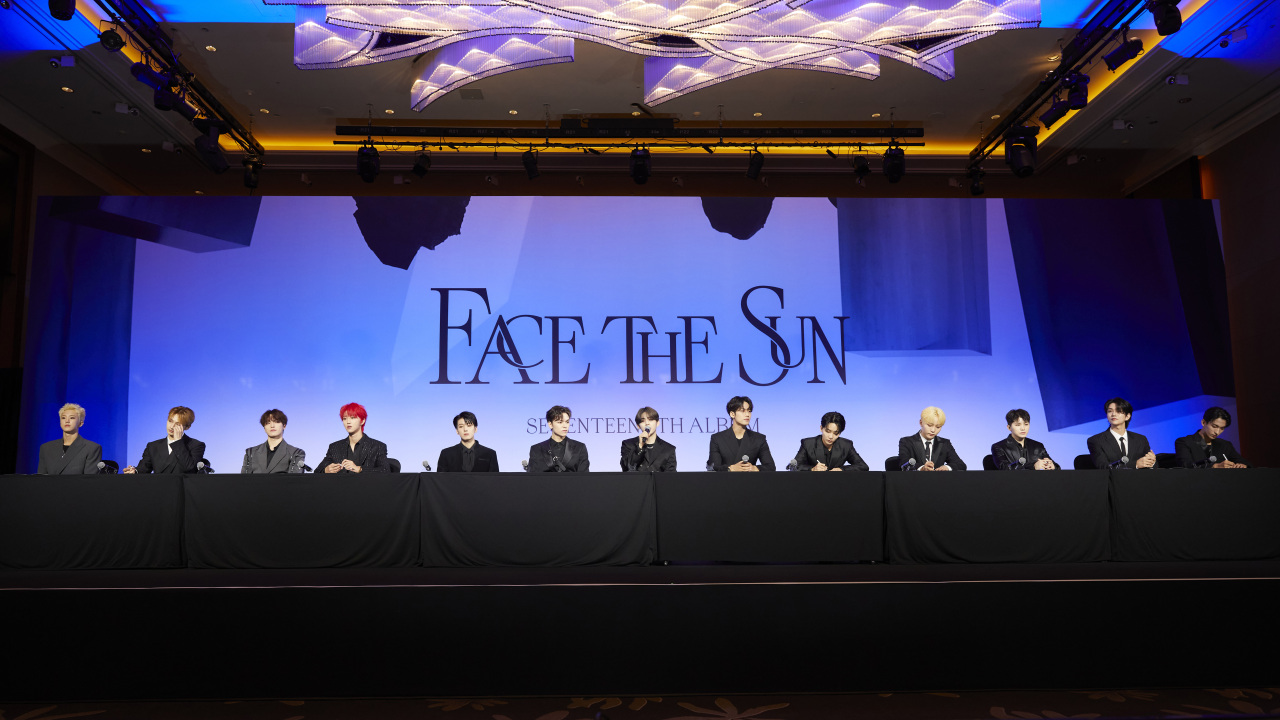 K-pop boy band Seventeen conducts a press conference for the act’s fourth LP “Face the Sun” on Friday at the Conrad Seoul hotel in Yeouido, Seoul. (Pledis Entertaiment)
Debuting on May 26, 2015, the band’s contract with Pledis Entertainment was due to end this year, but all 13 members renewed it in advance last year. According to the members, all 13 of them attended the meeting with the company together and made the decision as a team.

“There may be misunderstandings or rumors made if we negotiate the issue individually,” S. Coups said, explaining why they made a unanimous decision. “The company was also very accepting of our opinions. It could have been a pressure on the company to meet all 13 members at once, but they tried their best to consider all of us and the renewal came through.”

“Although we’ve been working hard the past seven years with the goal of becoming an artist who could be loved by many people, we didn’t expect to receive such a huge love as this. We’re sincerely thankful, and with more love, we want to share the good energy with our own music and performances,” DK said.

With the entertainment scene entering the post-pandemic era, Seventeen also said it is hoping to hold in-person concerts and world tours this year.

“We see the sun every day, and just like that, we hope to meet our global fans more often through concerts,” Mingyu said.

Dino added, “Our tour was halted in 2020 due to the pandemic, and it’s been two years and four months since. The stage is where we can play together with the fans. We want to share our emotions with them and show them how much Seventeen has grown.”

The members continuously stressed their sincere love for their fans.

“I think we’re able to maintain our fandom because we’re consistent in what we do. We work tirelessly to return the love we receive from Carats, and maybe that’s why many people support us,” Mingyu said.

S. Coups piped in, saying proudly, “I want to say with confidence that it’s because ‘Seventeen is good,’ and our love toward the fans are bigger and more sincere than anything.”

Now undoubtedly a veteran K-pop group, Seventeen seemed at ease speaking with local media during the conference, making jokes and continuously inducing laughter from a crowd that usually stays silent throughout an event.

On the long-term goal in kicking off as a newly contracted group, Jeonghan said, “we’d like to become a powerful existence like the sun,” reiterating the band’s latest album title “Face the Sun.” “Although our individual goals may be different, we’re running toward a shared point as Seventeen,” Jeonghan added.

Vernon’s goal as Seventeen was to “become a historic artist.”

“I believe Seventeen has limitless potential,” Vernon said, while Jun added, “We’re happy to have celebrated our seventh anniversary as a 13 piece, and if we’re still all together for our 14th anniversary seven years later, I suppose that will make us historic in the K-pop scene,” Jun said