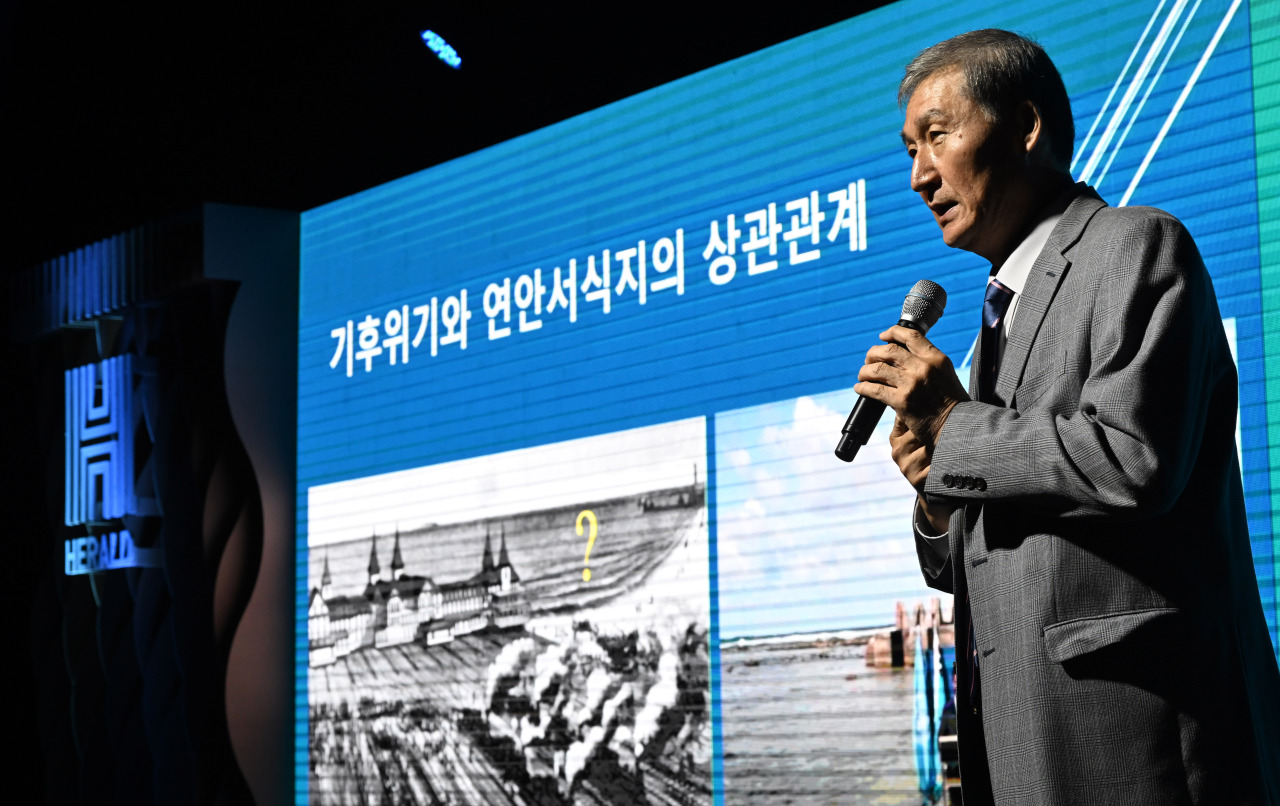 Chun Seung-soo, professor emeritus of Chonnam National University, discusses how the marine and coastal environments have been changing abruptly in response to climate change, at the H.eco Forum on Thursday. (Lee Sang-sub/The Korea Herald)
At this year’s H.eco Forum, experts took a moment to highlight the ongoing and expected changes to marine ecosystems due to climate change and discuss what efforts are needed to protect the environment and prevent socioeconomic disasters and challenges from occurring.

Chun Seung-soo, professor emeritus of Chonnam National University, started the session speaking about how the marine and coastal environments have been changing abruptly and discussed ways to mitigate and adapt to coastal disasters expected from rise in sea levels.

The director of the Eco Horizon Institute, who is also a member of Man and the Biosphere Program for the United Nations Educational, Scientific and Cultural Organization, played a pivotal role in having Korean tidal flats inscribed onto UNESCO’s world heritage list last year.

“Sea levels have risen from much earlier than we know of, and the only reason we care about it now is that the pace of rise is much faster than before,” Chun said. “It is getting faster and faster every moment, which is why we need to address what we should do moving forward.”

As stated in the sixth assessment report from the Intergovernmental Panel on Climate Change, climate change can cause various socioeconomic disasters, water shortages and inland crop productivity, Chun said, as well as disruption to the marine ecosystem from changes in sea temperature and ocean currents.

Chun stressed changes to the coastal environment and sea-level rise-induced erosion and flooding can also lead to severe socioeconomic problems. Even if global carbon neutrality is achieved by 2050, Chun said rising oceans are inevitable.

“Even if we achieve carbon neutrality right now, the sea level will continue to rise until 2030,” he said. “Korea is a country with a narrow land area and long coastal regions, so we are inevitably going to be impacted by this trend.”

The expert said in his lecture that humans must equip themselves with humility and compliance with nature ahead of tackling the sea-level rise. Rather than trying to stop water from rising onto land areas, South Korea must be willing to give up the areas they have occupied when waters encroach the coasts.

“It is not feasible to block the water from rolling in with the rise in sea levels; that’s just not a sustainable way to meet this change,” Chun said. “We need to equip ourselves with a mindset that we need to give back to nature. That is the philosophy that people caring about the environment has in viewing climate change.”

Chun advised South Korea to carefully assess what kinds of changes are expected at each part of its coastal areas and be willing to relocate cities and their residents to higher ground as needed. He added that programs should be implemented to make sure the country’s unique environment assets are preserved.

“Compared to other advanced nations, South Korea has not done much in response to the sea-level rise,” Chun said. “We need our own plan to address these changes with a mindset of accepting what is going to come instead of trying to fight it.”


Preserving whales to protect ourselves

Following Chun’s address, Lee Jeong-ah, a reporter with the Herald Business, offered a behind-the-scenes look on the making of “Last Sea,” a series of video reports that the publication produced to shed light on the serious damages humans have inflicted on the marine environment.

The three-part series reveals how unique marine species in South Korean territory have lost their lives and habitats as a result of overfishing, pollution and other damages by humans.

The three marine experts gave additional insight based on the Last Sea series, and agreed that the production raised awareness on the serious life-threatening damages humans have brought about on marine animals, especially whales.

The panel stressed whales are mammals that share many characteristics with humans and are species that can directly reflect the seriousness of environmental damage to marine ecosystems. The three experts said whales are indicator species that can provide signs of what is to come for humans.

“If sea water become polluted as a result of human behavior, we might face a situation in which whales will become unhealthy,” Moon said, adding that human health, the environment and its animals are inextricably connected, with the sea providing a glimpse into the future for humankind.

The risks that whales face are learning lessons for us, the panel said.

“When humans are hurt, there are not just problems with humans, but there must have been earlier similar signs from the environment and animals,” Moon added. “Therefore, the sea is where we can foresee things that could happen to humankind or things that are happening to us that we aren’t aware of.”

The initiative asks governments across the world to pledge to protect at least 30 percent of the planet’s land and oceans by 2030, which will be a step toward preserving the world’s existing intact areas and wilderness while respecting the rights of Indigenous peoples and ensuring the planet is sustainably managed.

Nam stressed the 30x30 goal is an important objective to reach, as oceans take up 70 percent of the planet’s surface and houses 80 percent of all species on Earth. Damages to the ocean environment could result in irrecoverable consequences, he said.

Kim emphasized oceans have been damaged at an alarming rate due to global warming, fishing activities, resource extraction, and plastic and chemical pollution, adding humans have done very little to protect the environment despite being aware of these negative changes.

Less than 2 percent of open sea is designated as protective areas and only around 1 percent of open sea prohibits human activities, Kim added, saying no international treaties have been signed to effectively and strategically protect open seas from human-caused pollution.

To achieve the 30x30 goal, the panel asked the South Korean government to work with other governments to designate protective oceanic zones and commit itself to work as a responsible member of the international society by supporting related activities from the public and private sectors.

The Korean government must understand the long-term benefits of protecting the oceans, the panel members said, and use it as an opportunity to grow related sectors and draw other entities to draft strong international statutes toward protecting open seas. The country should demonstrate leadership and break away from its tradition of chasing after others, the panel advised.

Nam and Kim also asked the media to help in raising public awareness of the 30x30 initiative so that it is viewed as a key agenda in the climate change fight. The general public must also be aware that fulfilling the initiative will translate to immediate benefits for people, they added.