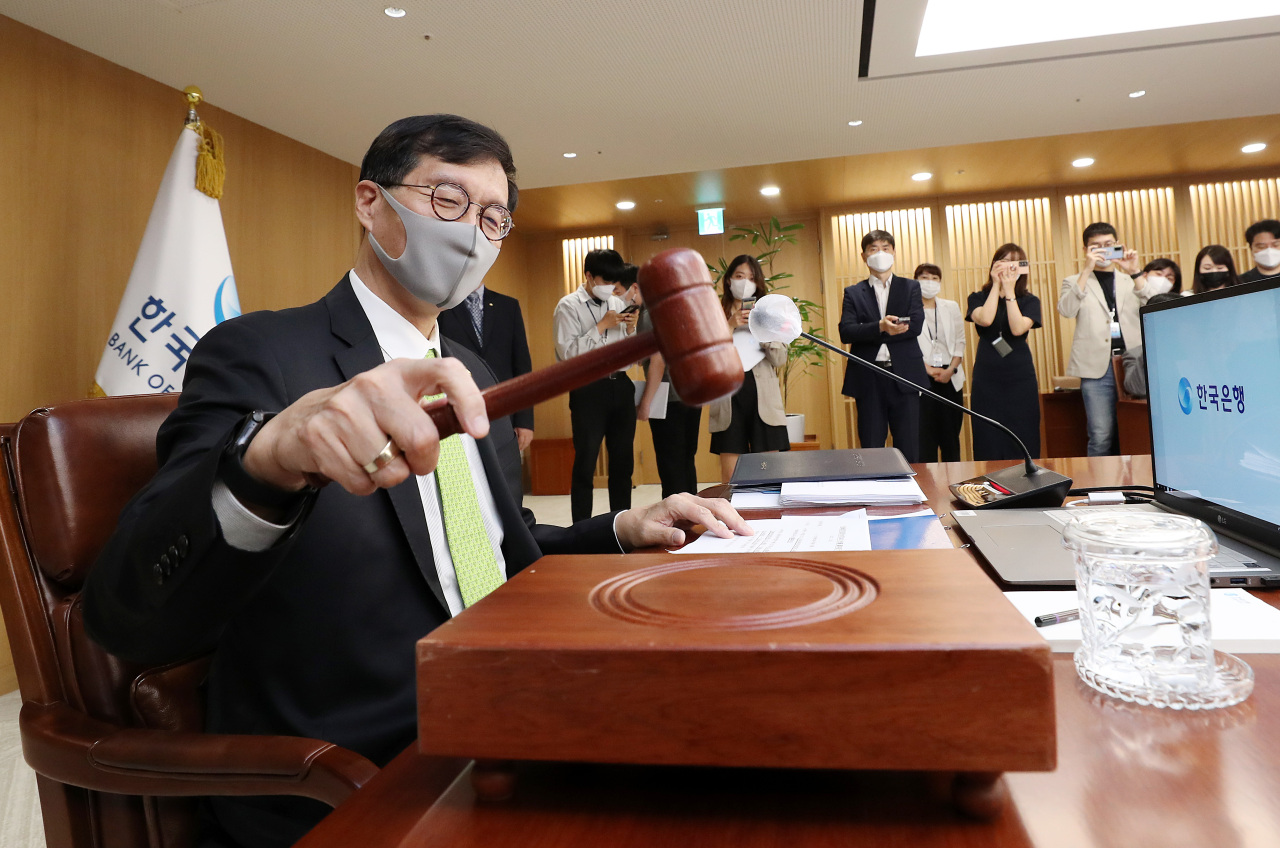 BOK Gov. Rhee Chang-yong presides over a rate-setting meeting held at the central bank headquarters on Thursday. (Yonhap)
South Korea’s central bank on Thursday raised its benchmark interest rate by a quarter percentage point to 1.75 percent and hinted at further rate hikes to come to fend off the country’s highest inflation spike in 14 years.

In the first rate-setting meeting presided by the new Bank of Korea Gov. Rhee Chang-yong, the six-member monetary policy board unanimously voted to carry out its fifth pandemic-era rate hike since August last year, when it decided to end 15 months of its record-low 0.5 percent interest rate. The latest rate hike also marked the third this year after two quarter-percentage-point hikes in January and April, respectively.

“With our economy continuing its recovery, it is forecast to see higher inflationary pressure as well, which is why we decided to carry out a quarter-percentage-point rate hike,” Rhee said in a press briefing tied to the rate-setting meeting.

“The BOK has decided to carry out its monetary policy focused on inflation, as the country is projected to see higher inflationary pressure for some time,” he added.

The BOK’s benchmark rate is likely to be in the range of 2.25 percent to 2.5 percent by the end of the year, the central bank chief said, hinting at further rate hikes later on to tame inflation.

“If the price of grain remains at a high level, grocery-related prices are to remain high for some time as well, keeping the inflation growth rate at 4 percent until early next year,” Rhee said.

The BOK on Thursday raised its annual inflation forecast to 4.5 percent from the previous 3.1 percent, eyeing the risks stemming from the prolonged global supply bottleneck, the Russia-Ukraine war and surging oil and energy prices. The latest inflation forecast marks the sharpest annual rise since July 2008, when the BOK projected 4.8 percent.

For Asia’s fourth-largest economy, the BOK slashed its annual growth from the previous 3 percent to 2.7 percent.

On the growing threat of stagflation, Rhee brushed off concerns. Korea’s actual economic growth is stronger than its potential growth rate -- despite signs of upward inflationary pressure and a slowdown in economic growth -- making it relatively safe from such risks, Rhee said. Stagflation occurs when economic growth slows, demand falters, and unemployment rises, while inflation keeps climbing.

On whether the joint statement released by South Korean President Yoon Suk-yeol and US President Joe Biden after their summit last week signals a revival of the currency swap deal between the two allies, Rhee only said it would be “inappropriate for the BOK to discuss the matter, as specific bilateral discussions are held between the US government and Korea’s Ministry of Economy and Finance.” But he added that the joint statement, which says the two leaders “recognize the need to consult closely on foreign exchange market developments,” acknowledges a stable foreign currency market as a key factor in establishing strong trade and investment ties.