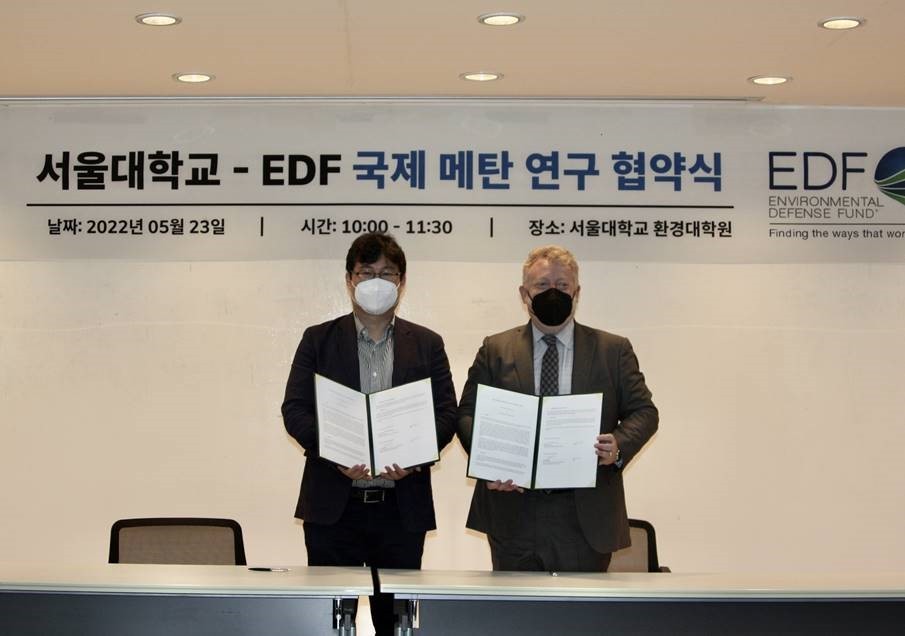 Seoul National University’s Son Yong-hoon (left) and EDF Senior Vice President for Energy Transition Mark Brownstein pose for photo after signing an agreement to study methane emissions in Seoul, May 23.
The Environmental Defense Fund signed a new agreement with Seoul National University’s Graduate School of Environmental Studies to study where and how much methane escapes from the nation’s gas delivery system in Seoul on May 23.

Under the agreement, EDF and SNU will facilitate dialogue and collaboration between scientists, academics, industry members and policymakers on methane studies, energy policy, and detection of methane in the urban gas distribution network.

SNU and EDF said they will facilitate collaboration among industry, government and scientists to develop new policies and practices to reduce methane emissions across the nation’s gas system.

“Reducing methane is a vital goal that must be achieved in order to reach carbon neutrality and respond to the climate crisis. The research agreement between EDF, a global research institute that will soon launch a methane monitoring satellite, and the SNU Graduate School of Environmental Studies will serve as an important opportunity to deal with the global climate crisis in Korea and beyond,” said Jeong Su-jong, a professor at the SNU Graduate School of Environmental Studies.

Natural gas is made up primarily of methane, a powerful greenhouse gas. According to EDF, last fall South Korea joined more than 100 countries, including Japan and the United States, in signing the Global Methane Pledge calling for collective efforts to reduce methane emissions by 30 percent by 2030.

New research under the agreement could help policymakers better understand to what extent it can cut emissions by tightening gas infrastructure, EDF said in a press release.

Asia-Pacific countries have become a key driver of the natural gas market. Already, South Korea, Japan, and China account for 50 percent of the world’s liquid natural gas trade. By 2050, the region is expected to account for nearly 60 percent of new global gas demand growth, according to the EDF press release.

“South Korea is a global leader in innovation and clean energy technologies like electric vehicles. Joining forces to help find and reduce methane emissions is a vital opportunity to extend this role, both in the region and on the world stage,” said EDF Senior Vice President for Energy Transition Mark Brownstein.

“We are pleased to collaborate and share resources to support and advance the development of policy-relevant methane science with the prestigious Seoul National University,” said EDF Chief Scientist and Senior Vice President Steven Hamburg.

“It is a crucial opportunity for countries and companies to accelerate the ability to meet the ambition of net-zero pathways, goals and commitments and energy security,” Hamburg said.

“Reducing methane emissions is an achievable, highly cost-effective process. It starts with locating and measuring the sources of emissions,” Hamburg added.