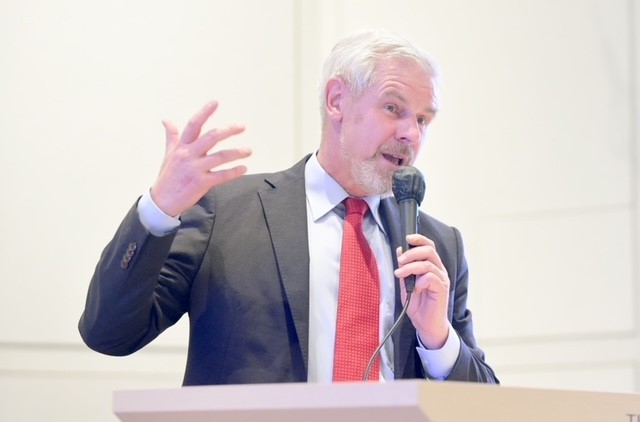 Reiffenstuel pointed to how the COVID-19 pandemic, semiconductor shortage and urea crisis upended the interconnectivity and vulnerability of trade.

“We will need to recalibrate our approach to certain trade and supply chain issues,” said Reiffenstuel, adding that it is seeking to diversify its partners.

“Europe’s strength was and is its ability to maximize its own capabilities through cooperation with close partners, such as Korea.”

Referring to the Russia-Ukraine war, he said Moscow’s invasion in February led many German companies to reevaluate its business partners and geopolitical dependency.

“German companies might see relocating or investing into Korea as an even more attractive opportunity,” he said.

In hopes of putting pressure on Russia for its attack, Germany has sought to wean itself off importing fossil fuels from Russia, its largest supplier.

Reiffenstuel thanked Korea for agreeing to divert an unspecified supply of liquefied natural gas until August to alleviate the energy shortages in Europe.

The ambassador said Russia’s war has caused supply breakdowns and have driven up food prices in regions where people are already suffering tremendously.

“As strong economies we (Germany and Korea) will be working together closely to address this pressing issue,” he said. 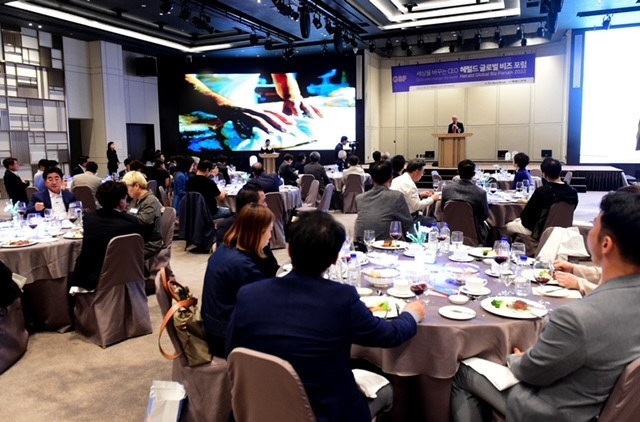 German Ambassador to Korea Michael Reiffenstuel addresses CEOs at The Korea Herald’s Global Business Forum at the Ambassador Hotel, Seoul, on May 18. (Jenny Sung)
Russia’s aggression has shown that freedom and security are not given “free of charge” said Reiffenstuel.

In response to the invasion, German Chancellor Olaf Scholz in February pledged 100 billion euros ($107 billion) in defense spending to modernize armed forces and the defense of freedom and security.

Berlin will continue to strengthen security, defense and humanitarian aid in the future, he added.

EU, together with its partners, has been reacting in a remarkably unified and determined way, agreeing on substantial sanction packages against Russia without precedent, according to Reiffenstuel.

“Not only EU, but an overwhelming majority of international community sent a strong signal,” said Reiffenstuel.

He also spoke about Berlin’s goal in upgrading their bilateral relationship with South Korea -- not only in the areas of foreign and security policy, but notably in the field of innovation, science, business and trade.

Discussing the German government’s climate goals, he said that Germany is committed to reach climate neutrality by 2045, reducing emissions up to 65 percent by 2030, compared to 1990 levels.

As part of a raft of measures aimed at reducing dependency on Russia, the German government in April tabled the so-called “Easter Package” to revamp the country’s electricity sector. Under the package, renewable power would account for at least an 80 percent share of energy produced by 2030, and shift to 100 percent by 2035.

“(The) Easter Package aims at a comprehensive amendment of relevant legislation, approval procedures will become much faster and less bureaucratic, electricity customers will be relieved of the burden of a renewable energy surcharge via their electricity bills,” Reiffenstuel said.

He said that Germany would phase out nuclear power by end of 2022 and coal gradually.

“Korea will remain an invaluable partner in climate and energy issues,” said the ambassador.

In an earlier meeting with Yoon, Reiffenstuel said he had highlighted his intention to intensify cooperation particularly in the climate and energy sectors.

“The quicker we manage to advance transition to renewable energies, the better,” he said stressing the need to import gas and oil from other countries for an interim period.

“An LNG terminal that today receives gas can tomorrow be used to import green hydrogen,” he said.

Separately, he also said Germany is keen on pushing for technology partnerships and digital transformation that would help spur economic growth. The EU is on track to form a digital partnership with Korea by the end of 2022 and expand cooperation in diversified areas, he added.