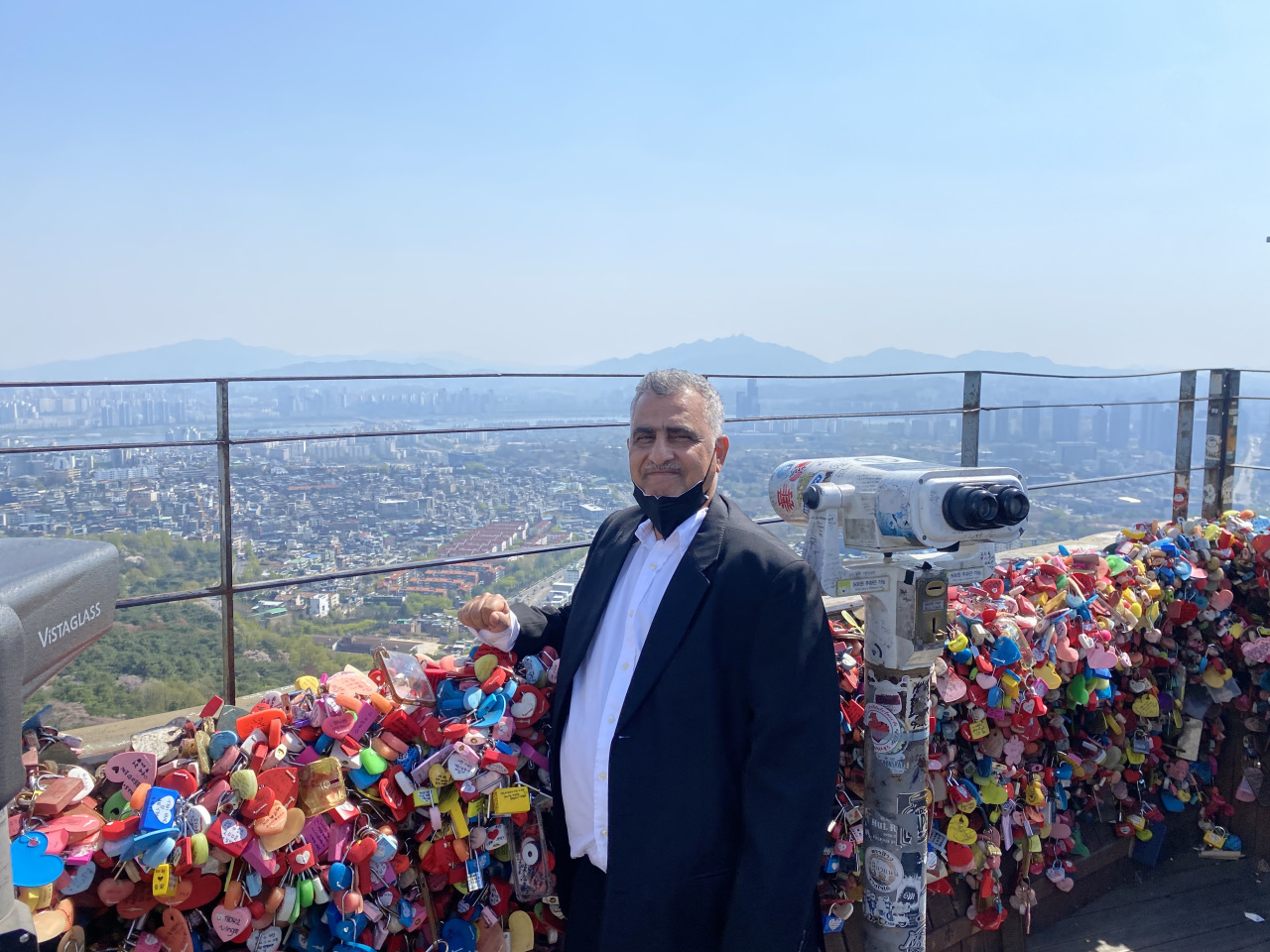 A view of Seoul from Namsan Seoul Tower (Embassy of the Sultanate of Oman in Seoul)
Some said that “travel has seven benefits” but when traveling to Korea, these benefits are magnified. The reason for this is that South Korea is one of the richest cultures in far East Asia and its people are some of the most exemplary when it comes to dedication and productivity.

As a society, South Korea has a collective ambition of developing and enhancing technology. The first thing a visitor will notice after getting off the plane is how Koreans love order. No matter where you look, Korea’s massive cities display some of the best qualities in a modern space — well-organized and well-disciplined. Here are a few observations I made when I visited the country

A long-storied past
Korea’s age as a country cannot be counted on fingers. It has been a witness to the World War II, the victory of the allied forces in 1945, the fall and end of Japanese rule on the island, the outbreak of a bloody civil war and even the division of the two Koreas (North and South). South Korea survived many of these turmoil and while it faced many challenging years, it managed to successfully build a modern society filled with peaceful development destined for glory.

Perhaps it is important to mention that the Republic of Korea, until the ‘50s, lived on foreign aid and international support. In just a matter of a few decades, it successfully transformed into a developed country and is now extending help to various countries all over the world. The trip began in the capital Seoul — a city of about 10 million people divided into large groups of 25 neighborhoods. Seoul is a progressive country that balances out green mountains with modern facilities and distinctly, a well-organized public transformation system for buses and trains.

Korea Foundation
Koreans are very efficient when it comes to their time management. Our work started quickly when we had an introductory meeting with Korea Foundation President Lee Geun. The meeting gave us a brief overview of what the foundation does which includes providing diplomatic activities that work to bring people together, organizing programs for foreign delegates’ visits, and for supporting and publishing Korean arts and culture. What they do is tap into “soft powers” to add a positive presence on the global scene. 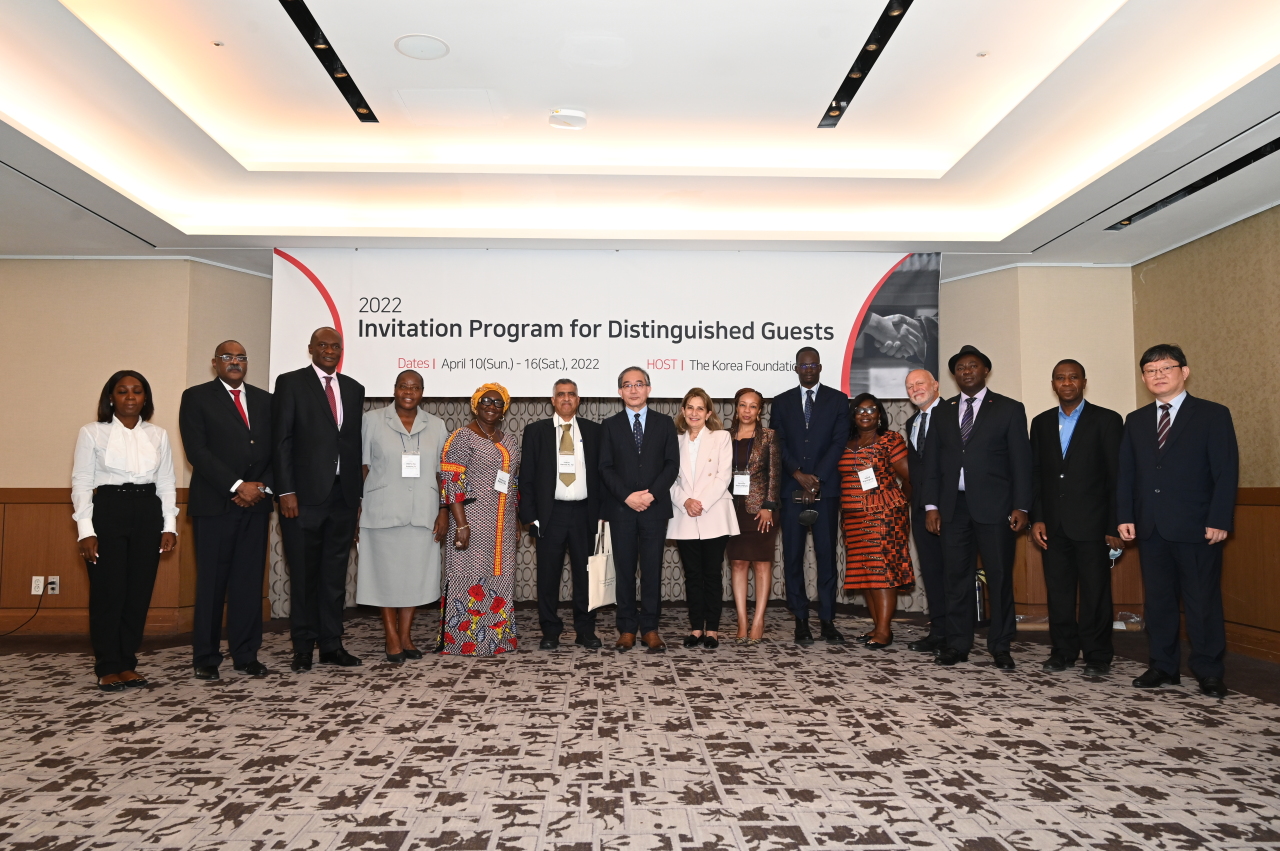 Korea Foundation President Lee Geun (seventh from left) greets guests. (Korea Foundation)
We visited the Korean parliament, which has about 300 members, representing different regions and states in Korea, and is responsible for legislation and control of the government and various state institutions. What I have noticed is that Koreans are proud of their language. There are few English speakers, and this is perhaps one of the secrets to their distinction. Holding to their original identity is the fastest way toward uniqueness.

I met with National Association member Jung Choun-sook, who is responsible for several important subjects; including the issue of equality between men and women, and most importantly, she is the Omani Korean relations development committee chair. What caught my attention was this great interest in strengthening parliamentary diplomacy and establishing a specialized committee to strengthen bridges of cooperation with other countries. The parliamentarian did not neglect to talk about the importance of developing Omani-Korean relations, expressing her desire to visit the Sultanate of Oman at the earliest opportunity, and she praised Oman and its good reputation as a friendly and peace-loving country.

Student missions
I presented to Jung the importance of increasing scholarships for Omani students to study at Korean universities in the fields of technology and sciences. I suggested establishing training programs for students from Omani universities to train, qualify and improve their skills in major Korean companies such as Samsung and Hyundai, during the summer period to gain experience, acquire great work culture and other skills in communication, task performance and job commitment. 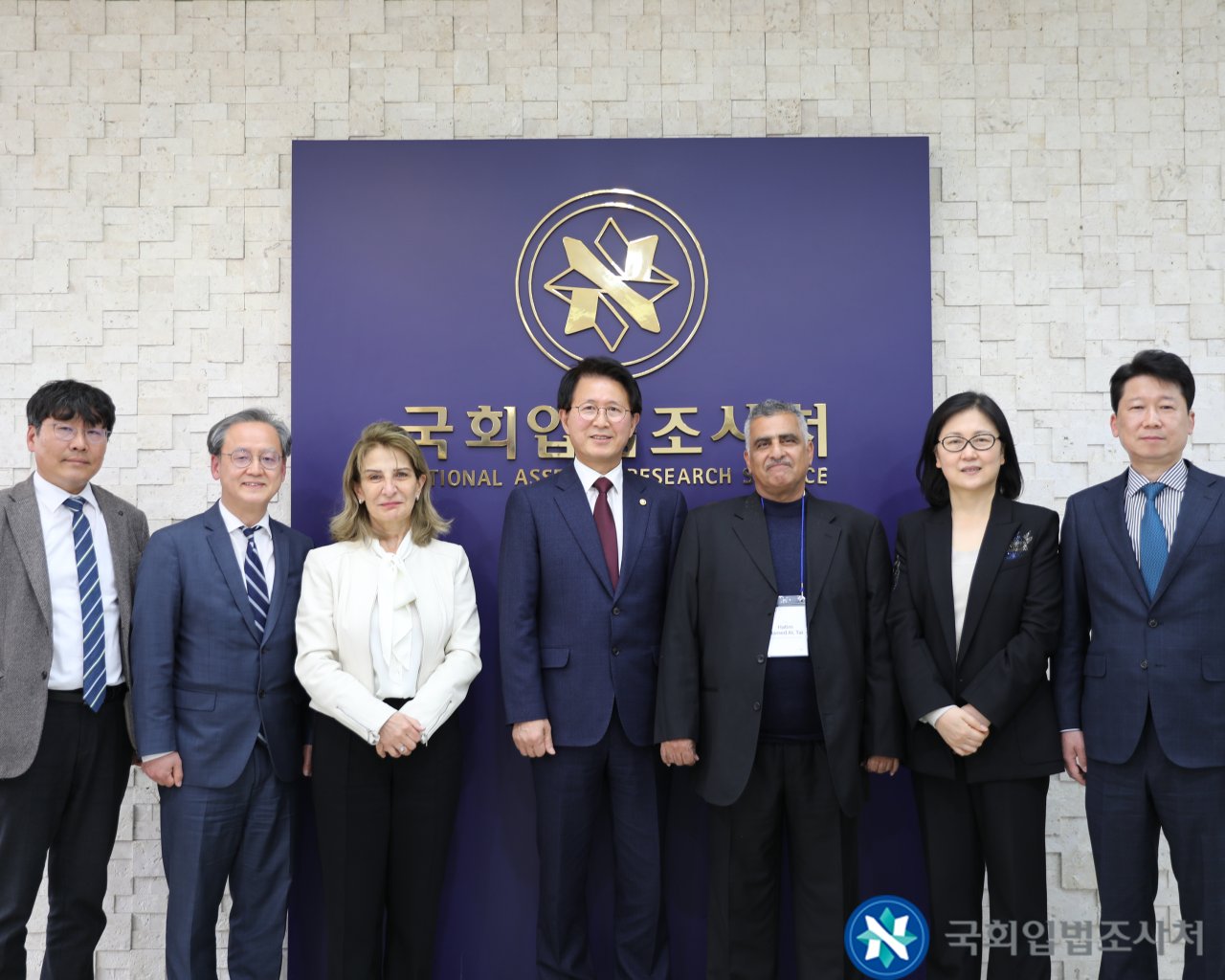 Meeting with National Assembly Research Service President Kim Man Heum (fourth from left) (National Assembly Research Service)
The president of the National Association explained the importance of the parliament’s work in providing great services in the field of research, studies on public opinion polls, and supporting members of parliament with all the extensive studies they need to help them take the necessary decisions.

This was followed by a meeting with Korean Foreign Ministry Undersecretary Chung Jong-kun who spoke about the various political challenges facing the world, including wars, tensions and conflicts that represent a threat to international peace and security. He clearly and frankly referred to the wisdom of Oman politics and its clear approach to establishing peace around the world. He spoke about the remarkable development in Omani-Korean relations, especially as they are close to reaching the 50-year milestone, as bilateral relations between the Sultanate of Oman and the Republic of Korea were established in 1974.

Talking about politics and diplomacy did not prevent us from clearly pointing out the promising investment, economic, and cultural opportunities that both Oman and Korea have, which would raise the relations between the two countries to higher levels in various aspects.

South Korea is talented at employing soft power, taking advantage of its physical and technological capabilities. I was introduced to Korea International Cooperation Agency or Koica, which is part of the Korean Foreign Ministry and represents the development arm that works to establish projects in many countries of the world to fight poverty, disease, ignorance, build strategic partnerships with many countries in various fields of development, and organize humanitarian aid in various fields of development.

It always astonishes me the interest of East Asian countries to strengthen ties of cooperation with the countries of the world, on purely humanitarian grounds. Although they are aware of the extent of their soft power and its impact, they are very keen to enforce these soft powers, to achieve development goals that promote human rights, without interfering in countries’ internal affairs, or talking about political aspects related to local conditions of countries. This is what should be paid attention to and maintained to achieve a future that is based on solid cooperation with various countries.

Multiple visits
The trip schedule — as I mentioned earlier — was full of meetings and visits to several sites and institutions, and our trip included a visit to the smart city Anyang, which is located outside the capital Seoul. It is called a smart city because, within the last 15 years, it was able to deliver on the ideals and theory of what makes a smart city where everything is interconnected and well-coordinated including the police. Seoul is equipped with about 6,500 surveillance cameras throughout the city that work overtime monitoring traffic and controlling violators or monitoring and limiting suspicious actions, all of that aimed to keep the city safe, secure, and stable. This system has helped reduce crime and traffic accidents through a highly accurate monitoring system.

Hyundai factory
There is no doubt that a visit to Korea will not be complete without visiting its industrial fortresses, and on top of these forts comes the giant Hyundai factory, which despite intense competition from European and American technology, has been able to excel globally in the automobile industry. From the date of its establishment, 10 years later, it became an advanced auto industry giant setting foot in the global auto market and making sure that Hyundai cars are found almost in all the streets of the world.

What astonished me is that this large company developed its manufacturing systems not solely dependent on manual labor but rather a reliance on robotics. A quick browse through their assembly process reveals how the machines are in charge of installing parts of the cars with minimal supervision from factory workers who are then supervised by a select group of engineers.

Hyundai has evolved to an exceptional level that it has shown us its first car powered by environmentally friendly green hydrogen energy. The car is planned to be revealed this year, and it is expected to conquer the world in the next few years.

Korean drama and music
The impact of Korean culture on drama and music can be found everywhere. Some of their best television series are not only viewed all over the world, they also include different language subtitles including Arabic. Even in Gulf countries, Korean series are easily found on different satellite channels. Ironically, Turkish series are adapted from many Korean dramas, and for this reason, we find Korean shows finding TV lovers everywhere.

Perhaps the most well-known example of Korean “soft power” dominating the consciousness of the world was the introduction of the song “Gangnam Style.” It has achieved international fame, and to date, boasts more than 4 billion views on YouTube so far. Gangnam is one of the modern neighborhoods in Seoul which is known for its restaurants and cafes. Korean cuisine is characterized by healthy food and it highly relies on vegetables. “Kimchi,” or Korean pickles, is an essential dish on every table in Korean homes.

Koreans work long hours without tiring; because they turned work into a means of both self-realization and dream of life realization. Koreans love discipline, respect and appreciation. When they meet, they bow to greet or thank someone, saying “kamsahamnida,” which means “thank you.”

Korea represents an advanced model of modern civilization, which is based on technological innovation and provides an elegant way of life.

Omani diplomacy in Korea
When I talk about the Omani diplomatic presence in Korea, I see our embassy in Seoul as an inspiration for activity and continuous work. The Oman Embassy in Korea is located in a high-rise building in one of the finest Korean neighborhoods. The embassy embraced the original and unique Omani architecture, and any visitor can notice the uniqueness of the building based on the foundations of the ancient Omani heritage, which derived its essence from Islamic architecture with a mixture of different cultures until it crystallized in an Omani crucible flourish with originality and uniqueness. 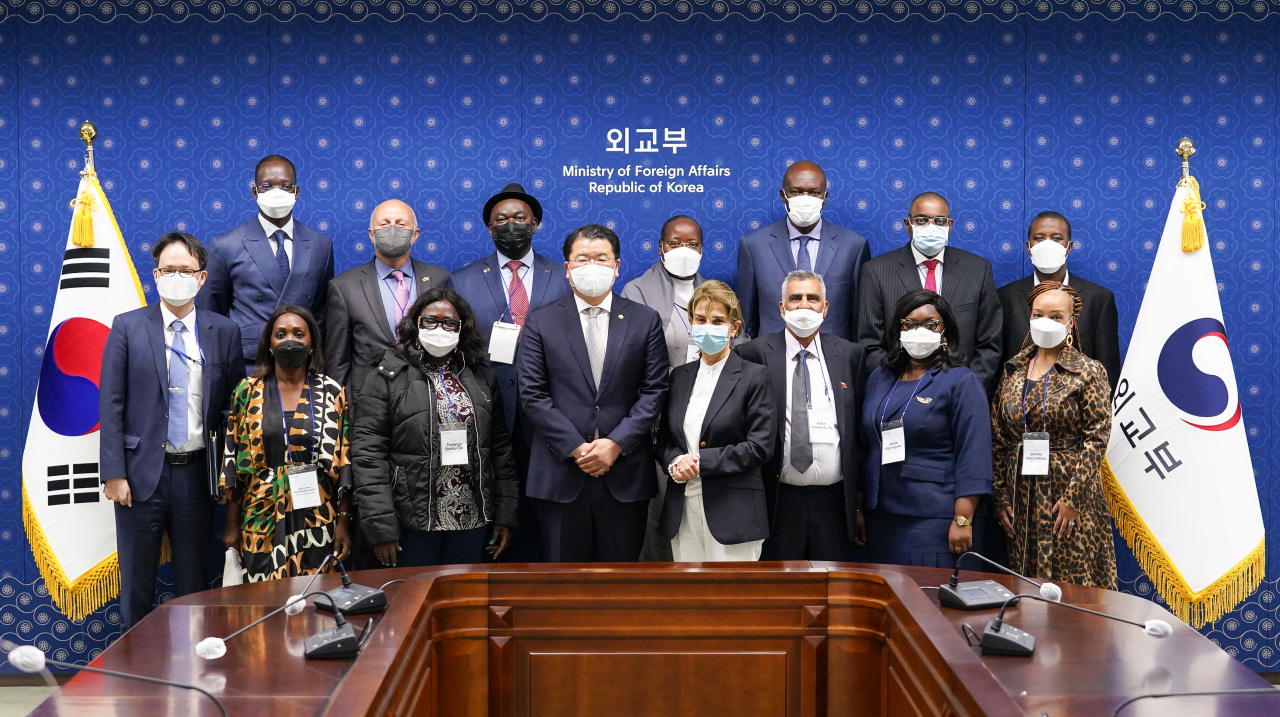 (Fourth from left, front row) South Korean Vice Foreign Minister Choi Jong-kun (Ministry of Foreign Affairs in Seoul)
I met Zakaria bin Hamad al Saadi, the ambassador of Oman to Korea, and I found him a wonderful example of the Omani ambassador abroad.

The ambassador represents the spirit of youth full of enthusiasm toward work, with all energy and activity. From the first moment we met until we parted, the smile never left his face. He emanated a calm presence and strong charisma, full of modesty at the same time.

The ambassador possessed extensive knowledge, in addition to his diligent follow-up of events and developments in various fields, and he is working to utilize all of this in evolving the Omani-Korean relations. Here I point to the serious discussions between the Republic of Korea and the Gulf Cooperation Council countries to conclude a free trade agreement, which is a step that would support improvement of Gulf-Korean relations.

One of the most beautiful things I learned during my visit to Korea is that the most famous, finest, and most delicious grape type is called the “Bright Muscat Grape,” a strategic crop for Koreans.

The history of Muscat grapes goes back to the period of the Portuguese presence. The Portuguese took the seeds of Omani grapes from Jebel Akhdhar to grow them in Europe, and it was a great success due to the nature of the weather there. And 30 years ago, the Japanese conducted successful experiments to develop this grape through genetic engineering, and when it arrived in Korea, it achieved great success. The truth is that when I saw this Omani grape flourishing in the far east, I wished that it would return to our beloved country, and we would grow it in large areas.

In conclusion, Koreans have impressed me with their culture of love for work, fondness for excellence and distinction, and at the same time not neglecting to enjoy the joys of life. That is why I would say “kamsahamnida.”