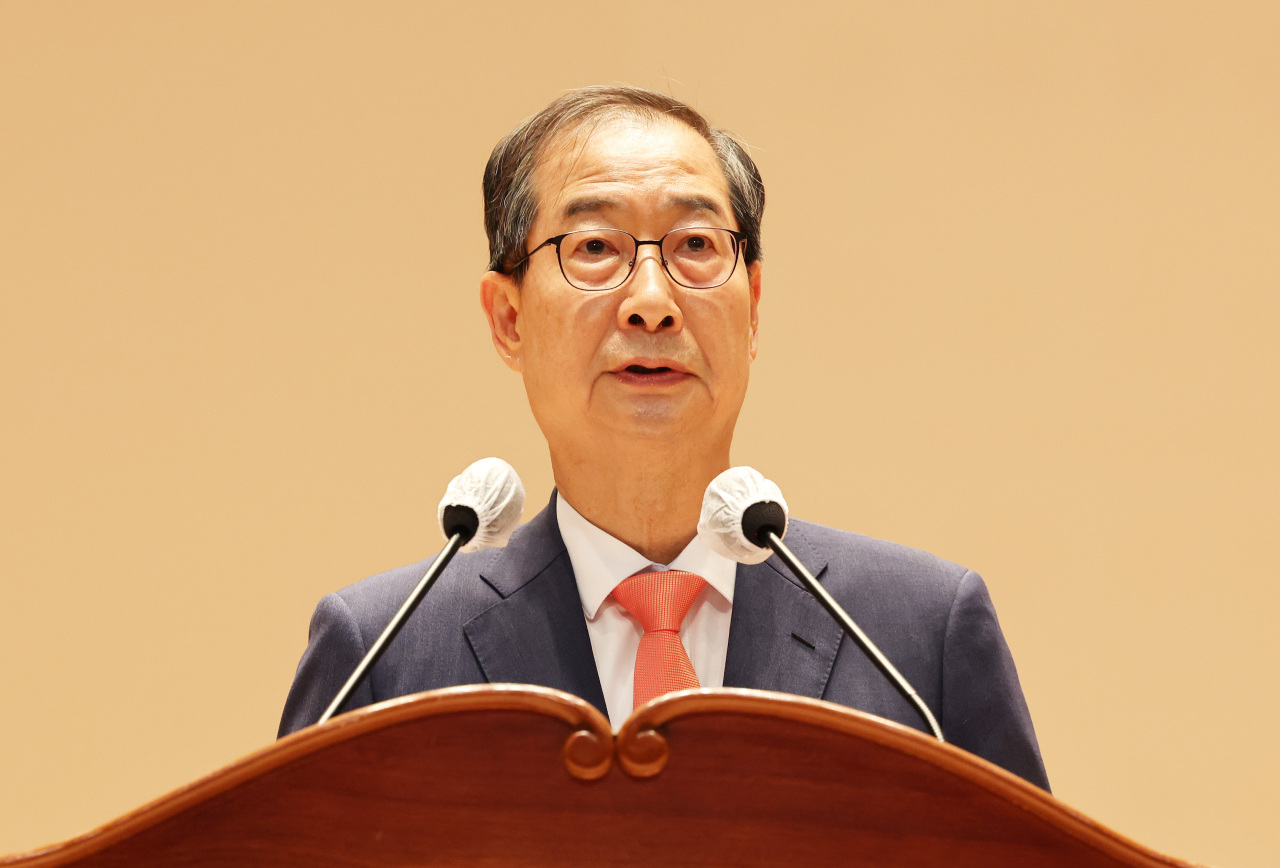 At his inauguration, Han stressed he would seek cooperation with the country’s major parties and that the government will make all-out efforts to help the country’s economic recovery, while hinting at cutting red tape in the future.

“Without national unity and political cooperation (among the government and major political parties), the overall efficiency of society goes down,” Han said during the inauguration ceremony held at the government complex in Sejong.

In his speech, the prime mister directly asked for support from the main opposition Democratic Party of Korea, which had held back his appointment.

“I would respect the main opposition party as (the new administration’s) partner in dealing with state affairs,” Han said. “Doing away with formalities and old methods, (the government) will actively engage in communication and cooperate (with the opposition party), Han said.

For the Yoon administration, cooperation from the main opposition will be vital for at least two years, as the Democratic Party holds a majority in the National Assembly.

To appeal to the opposition party, Han attended a commemorative ceremony for Roh Moo-hyun at the late president’s final resting place in Bongha Village, South Gyeongsang Province in the afternoon.

Upon his inauguration, Han also pledged that he would listen to the voices of different sectors and aim to address various socioeconomic issues.

Of the many items on his agenda, Han said issues regarding people’s livelihoods would take precedence. Han made a special note of the government’s proposed extra budget of 59.4 trillion won ($46.8 billion), through which it aims to compensate small merchants who suffered from the economic fallout from the COVID-19 pandemic.

Han also said the government would “introduce all possible policies in cooperation with related ministries to tackle surging inflation and household debt, which are directly related to people’s lives.”

In terms of business environment, Han said the government would take “bold and strong” initiatives to improve the ease of doing business. Han hinted that the government would minimize its involvement in the economy, saying that “the county can grow properly only when the private sector leads and the government pushes it from behind, within the boundary of the market economy system.”

Han’s appointment, 11 days after Yoon took office, had faced a series of setbacks.

In April, the Democratic Party sought to block Han’s confirmation hearing with a boycott. The Democratic Party raised suspicions that Han received a hefty salary as an adviser at Kim & Chang, the largest law firm in Korea, after he first retired from politics. The liberal party also called into question the lucrative sales of Han’s wife’s paintings to large companies.

Due to the boycott, Han’s confirmation hearing was delayed to May 2 and 3. The Democratic Party then also threatened to reject Han’s nomination if Yoon pushed ahead with the appointment of Justice Minister Han Dong-hoon.

In South Korea, the prime minister is the only Cabinet post that requires approval from the National Assembly.

Appointment of those two positions are expected to take a little longer. Yoon is to hold regular Cabinet meetings without the health and education ministers, including his first session scheduled on Thursday.

“It still needs some more time,” Yoon said about his unpopular nomination of Chung Ho-young as the country’s health minister on Monday.

The main opposition party has been asking Chung to withdraw over allegations that Chung, a former chief of Kyungpook National University Hospital, used his position to help his daughter and son get accepted to KNU medical school. Chung also allegedly exempted his son from active duty service in the military.

The ruling People Power Party is also asking Chung to withdraw, as his appointment could have negative impacts on the upcoming June 1 local elections.

The appointment of the education-deputy prime minister has been put on hold as former Education Minister nominee Kim In-chul resigned earlier this month due to allegations related to his family‘s inappropriate reception of scholarships from a nonprofit organization.