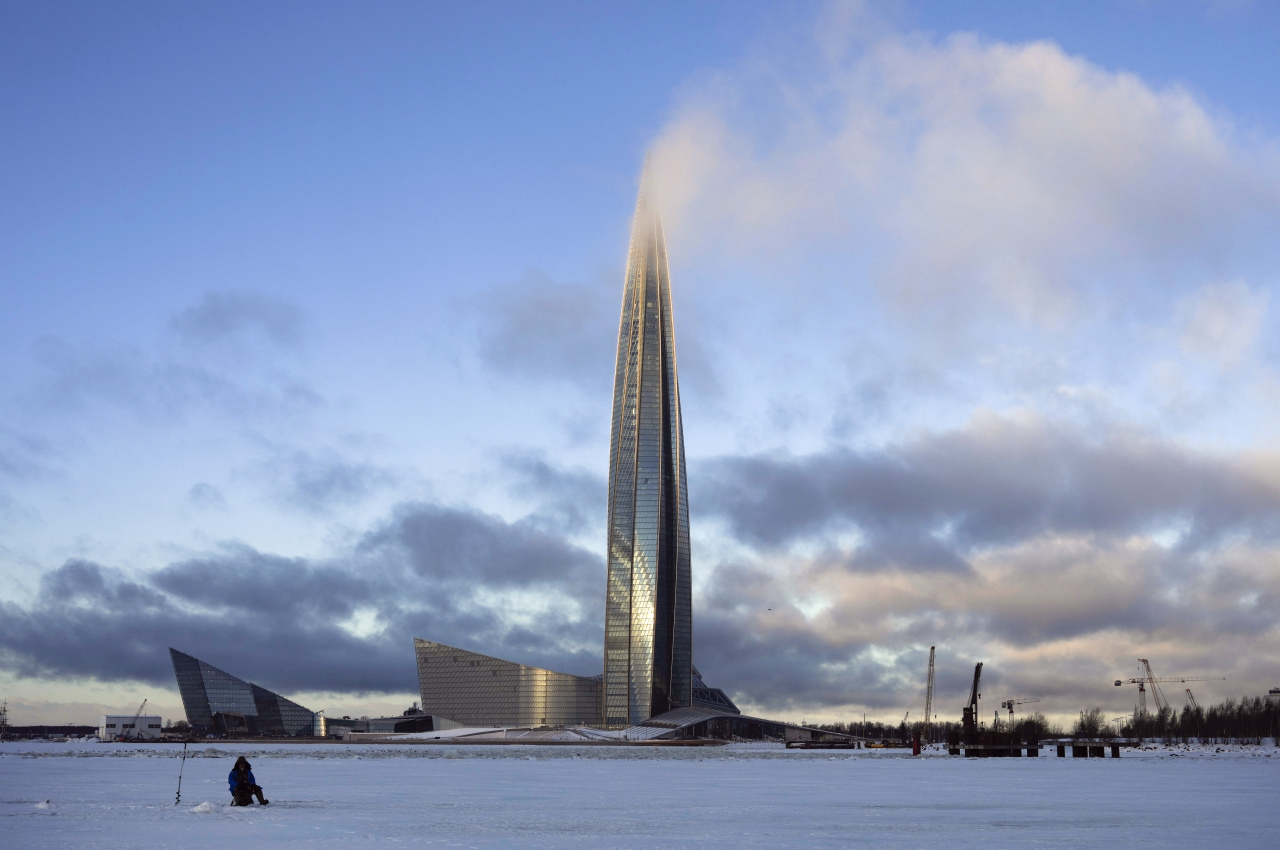 A man fishes on the ice of Finnish Gulf next to the business tower Lakhta Centre, the headquarters of Russian gas monopoly Gazprom covered by clouds in St. Petersburg, Russia, on Jan. 13, 2022. (AP)
China is considering buying or increasing stakes in Russian energy and commodities companies, such as gas giant Gazprom PJSC and aluminum producer United Co. Rusal International PJSC, according to people familiar with the matter.

Beijing is in talks with its state-owned firms, including China National Petroleum Corp., China Petrochemical Corp., Aluminum Corp. of China and China Minmetals Corp., on any opportunities for potential investments in Russian companies or assets, the people said. Any deal would be to bolster China’s imports as it intensifies its focus on energy and food security -- not as a show of support for Russia’s invasion in Ukraine -- the people said.

The discussions are at an early stage and won’t necessarily lead to a deal, the people said, requesting anonymity as the discussions aren’t public. Some talks between Chinese and Russian energy companies have started to take place, according to separate sources.

CNPC and China Petrochemical -- known as Sinopec Group -- declined to comment, according to the companies’ media officials. Chinese state-asset regulator Sasac, Aluminum Corp. of China and Minmetals didn’t immediately respond to requests for a comment. Representatives for Gazprom and Rusal didn’t immediately comment during a national holiday in Russia.

Russia’s war in Ukraine has increased the pressure on Beijing to secure imports as the cost of energy, metals and food skyrocket to unprecedented levels. Worried about the impact surging prices will have on the economy, China’s top government officials issued orders to prioritize commodities supply security, Bloomberg reported last week.

China has vowed to continue normal trade relations with Russia despite a massive corporate exodus from European and American firms. BP Plc, Shell Plc and Exxon Mobil Corp. took the energy industry by surprise by walking away from Russian assets worth billions of dollars.

Meanwhile, China Foreign Minister Wang Yi said earlier this week that China-Russia ties remain “rock solid,” even as Beijing expressed concern about civilian casualties and called for peace talks to end the war. Among China’s current energy investments in Russia, CNPC has a 20% stake in the Yamal LNG project and a 10% state in Arctic LNG 2, while Cnooc Ltd. also owns 10% of Arctic.

The two countries had already been strengthening ties, with Presidents Xi Jinping and Vladimir Putin last month signing a series of deals to boost Russian supply of gas and oil, as well as wheat. Gazprom and Rosneft PJSC were among Russian energy giants sealing agreements as the two leaders met in Beijing ahead of the Winter Olympics.

Still, any investment in Russia is fraught with risks that go beyond the geopolitical balancing act that Beijing faces. Russia has become a nearly un-investable market for global firms as the nation’s economy rapidly deteriorates. Sanctions have wiped billions of dollars from Russian assets and bonds have plummeted as default risks intensify. The yuan has surged against the ruble, raising questions over the strategic relationship of both countries.

An investment by China could help solidify Moscow’s effort to accelerate a so-called “Pivot to Asia” with oil and gas supply deals. China has doubled purchases of Russian energy products to nearly $60 billion over the last five years.

The Power of Siberia pipeline began sending gas to China in 2019, and Gazprom is already in talks with China over another route that could be signed this year, eventually allowing it to ship fuel from gasfields that supply Europe.