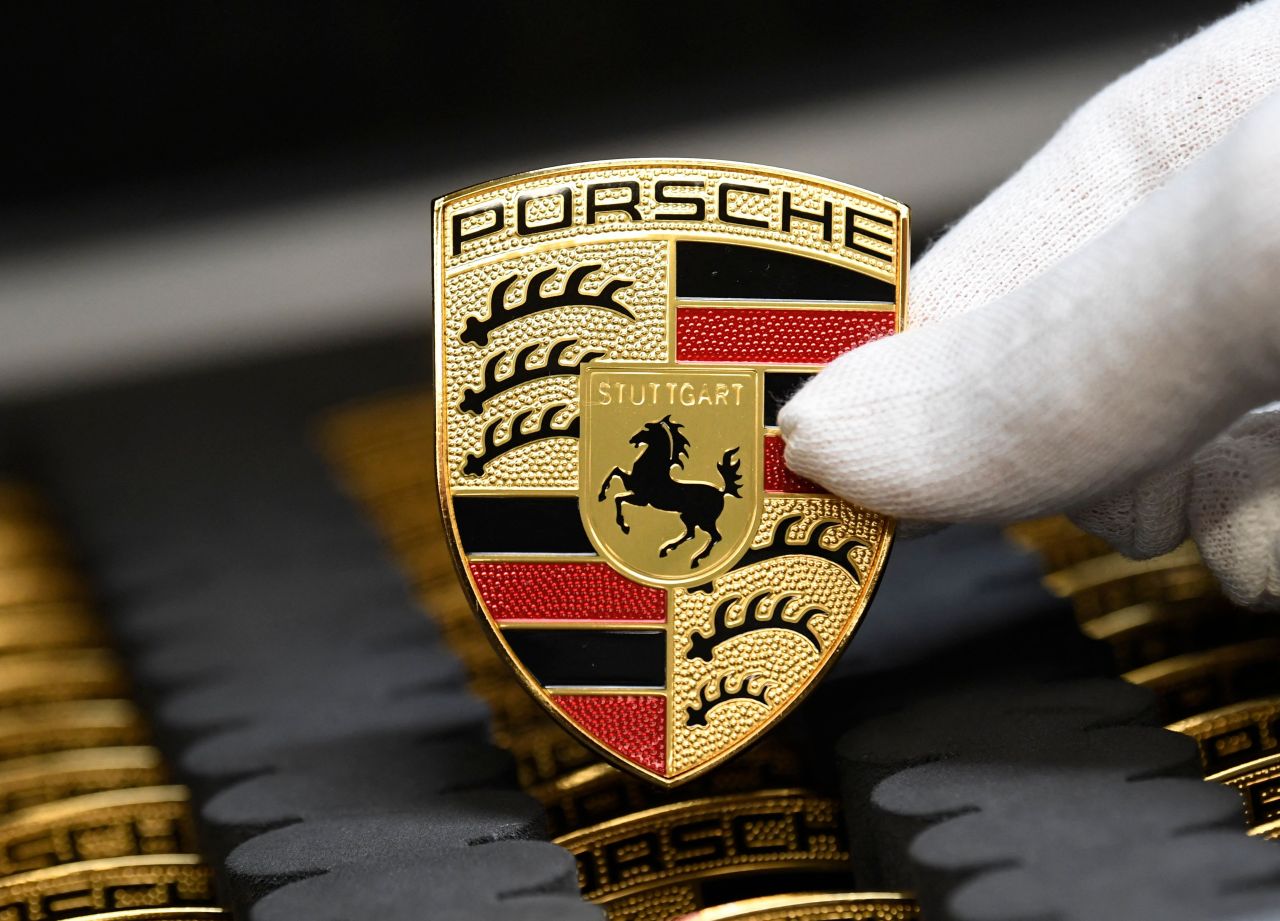 This file photo taken on March 4, 2020 shows the logo of German luxury car maker Porsche AG at the company's production site in Stuttgart, southwestern Germany. (AFP)
Volkswagen AG is preparing an initial public offering of Porsche, seeking a listing of its most profitable asset to help boost the parent’s valuation and fund the push into electric vehicles.

VW’s preferred shares surged as much as 10% after the announcement Tuesday on a possible IPO outline between the carmaker and and Porsche Automobil Holding SE, a company controlled by the billionaire Porsche and Piech owner family. The tentative plan, which is estimated to value the sportscar brand at as much as 85 billion euros ($96 billion), would reverse a tumultuous takeover of Porsche more than a decade ago and signals the extent of the upheaval sweeping the industry.

Europe’s biggest carmaker has been pushing for years to adopt a less centralized corporate structure to become more nimble and step up its challenge of Tesla Inc. Success has been modest. The IPO of Traton SE, VW’s truckmaking unit, fizzled amid internal ructions and a limited free float, while a plan to separate the Lamborghini supercar and Ducati motorcycle brands didn’t progress.

Volkswagen’s management and supervisory boards still have to sign off on the framework agreement with Porsche SE and a final decision hasn’t yet been made, the carmaker said.

Volkswagen has confirmed what we suspected for some time, that it’s in advanced talks for an IPO of its Porsche brand, which we value at 60-85 billion euros -- based on a 55-70% discount to Ferrari’s EV/Ebitda -- vs. VW’s market cap of just 112 billion euros. Porsche benefits from both its luxury appeal and an electrification edge, with an anticipated 40%-plus battery-electric-sales mix by 2025. VW trades on a lowly 2.1x 2023 EV/Ebitda, representing an 89% discount to Ferrari and 94% discount to Tesla, with a Porsche IPO likely to generate significant shareholder value.

VW’s Porsche Worth $70 Billion If Driven Like a Ferrari: React While VW Chief Executive Officer Herbert Diess appeared to pour cold water on a Porsche listing about a year ago, he’s under pressure to start catching up to Tesla. After a well-received presentation of VW’s accelerated EV plans in March last year and successful models like the Porsche Taycan, efforts have sputtered and its market valuation remains dwarfed by the U.S. EV leader.

A plan to list Porsche chimes with deep restructurings in train elsewhere among traditional carmakers and suppliers. In the latest example, Ford Motor Co. is looking at ways to separate its electric-vehicle operation from its century-old legacy business to unlock value.

Separating Porsche could offer a new funding option for the group. VW largely relies on generating enough cash on its own or issue bonds, because its convoluted shareholder structure limits options to raise fresh equity capital like Tesla has done, without diluting shareholdings of key stakeholders that control about 90% of VW’s voting stock.

The two companies share a common history dating back to the late 1930s and have been formally tied together following a protracted battle for control. Porsche first sought to buy VW little more than a decade ago, before the audacious coup failed and the far bigger manufacturer turned the tables, taking control of the sportscar maker in 2009. A remnant from that acrimonious saga is Porsche Automobil Holding, which has a voting stake in VW of about 53%.

Porsche is the most iconic brand in VW’s stable and highly profitable, among other nameplates like Audi, Skoda and Bentley. Creating the multi-brand structure was the brainchild of Ferdinand Piech, the influential CEO and chairman of VW who engineered the Porsche takeover despite opposition from his cousin, Wolfgang Porsche. Piech passed away in 2019, aged 82.

But the prospect has remained part of conversations around Porsche and officials have openly flirted with the idea that would give one of the world’s most coveted car brands more independence.

“I think Porsche could be an interesting part for thinking about an IPO,” Porsche CEO Oliver Blume said during a briefing with U.S. reporters last year, cautioning that a final decision won’t be his to make. “We have to hand it to Volkswagen and they have nothing decided.”