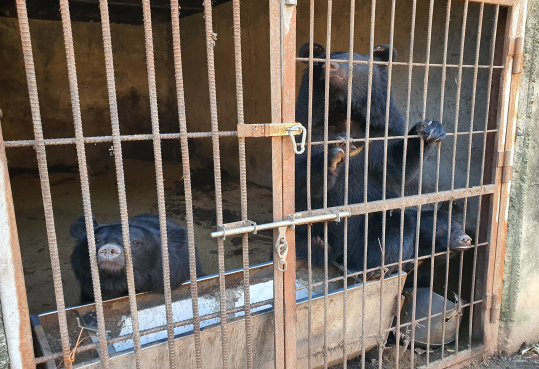 (Yonhap)
Late last month, the Ministry of Environment announced that all bear farming will be outlawed in Korea as of Jan. 1, 2026, and the currently farmed bears will be relocated to shelters for protection by 2025.

The decision follows decades of controversy on the practice, which started in 1981 due to high demand for the bear bile used in traditional medicine.

“The declaration to cease bear breeding is particularly meaningful because the government, the agricultural industry and civil society have combined to resolve a 40-year-old issue,” Minister Han Jeoung-ae said in a statement.

Bear farming is a relic of an era when the preservation of endangered species was an afterthought on the peninsula. Consumption of bile and other parts of the animal was allowed back when 493 bears were imported from 1981 to 1985 for breeding purposes.

Authorities since have revised the law to ban meat and fur trading, but the bile has been allowed to be sold as ingredient for medicine. The trade of bear bile can technically continue until 2025, when the bill providing legal grounds to the ban is expected to be enacted.

Of the eight existing bear species worldwide, all but six are categorized as being threatened with extinction by the International Union for Conservation of Nature. This includes the species indigenous to Korea, the Asian black bear.

The controversy over bear farming centers on the cruelty of breeding bears for bile extraction. The horrible conditions in which the animals are kept to have their bile extracted have been revealed on several occasions.

In one recent case, two bears escaped from a farm in Yongin, Gyeonggi Province, in November last year. It turned out that similar incidents had occurred five other times at the farm where bears were kept in interlinked metal cages that each were 3.3 square meters in size, and they had reportedly shown abnormal behavior due to stress, such as circling in place and rotating their heads repeatedly.

The announcement of a bear farming ban comes as South Korea is currently contending with an even more controversial aspect of the culture -- its long-running practice of eating dog meat.

Dog meat has a long history in Korea, touted as a stamina-boosting dish, but in recent years the industry has struggled with dwindling demand amid international criticism. The meat can be found only in some traditional markets and is served at relatively few restaurants.

The industry has remained in a legal gray area, which has resulted in lax oversight. The Animal Protection Act states that animals cannot be slaughtered cruelly, but does not mention dog slaughter or specifically ban dog meat consumption, while the Livestock Products Sanitary Control Act does not cover dogs. The Food Sanitation Act does not include dog or dog meat as food ingredients as determined and announced by authorities to be allowed for sale.

“Dog meat consumption is a complicated issue related to basic human rights and animal rights issue, as indicated by a majority of the citizens being against eating dogs but also against banning it by law,” a government official was quoted as saying.

Such complication is reflected in recent surveys related to dog meat consumption.

A June survey by pollster Realmeter on 1,012 adults shows that 72.1 percent said consumption of dog meat should be up to the individual. But according to the Humane Society International in 2020 -- commissioned to Nielsen Korea -- 83.8 percent of the 1,000 respondents said they had never eaten nor were planning to eat dog meat in the future.

Besides banning bear bile farming and consumption of canines, Koreans are also paying more attention to the well-being of animals on camera.

According to news reports, KBS TV‘s historical drama “The King of Tears, Lee Bang-won” will not air this week and the station is undecided as to whether or not it will go back on the air at all. The show has been grounded for a third straight week after a scene in the seventh episode that was shot by forcibly tripping a horse, resulting in the stuntman’s injury and the horse’s eventual death a week after the shoot.

What followed was a hail of criticism undeterred by multiple apologies from KBS, as well as a petition to Cheong Wa Dae calling for protective measures for animals used in filming, which had obtained over 157,000 signatures as of Monday.

It was in stark contrast to the complete lack of public outcry about a similar animal cruelty situation during the shooting of 1990s drama “Tears of the Dragon” -- which ironically also featured the same Joseon era King Lee Bang-won -- when an anesthetized deer was forcibly thrown to the floor.

On coattails of the incident, the Ministry of Agriculture, Food and Rural Affairs announced that it will provide guidelines for animal protection during filming, based on principles that animals’ lives and rights should be valued and not threatened, and they should not be treated like simple props.

“We (the ministry) will try our best for social consensus (for animal rights) and providing appropriate systems, so that filming sites would not be a blind spot in animal protection and welfare,” the ministry said.