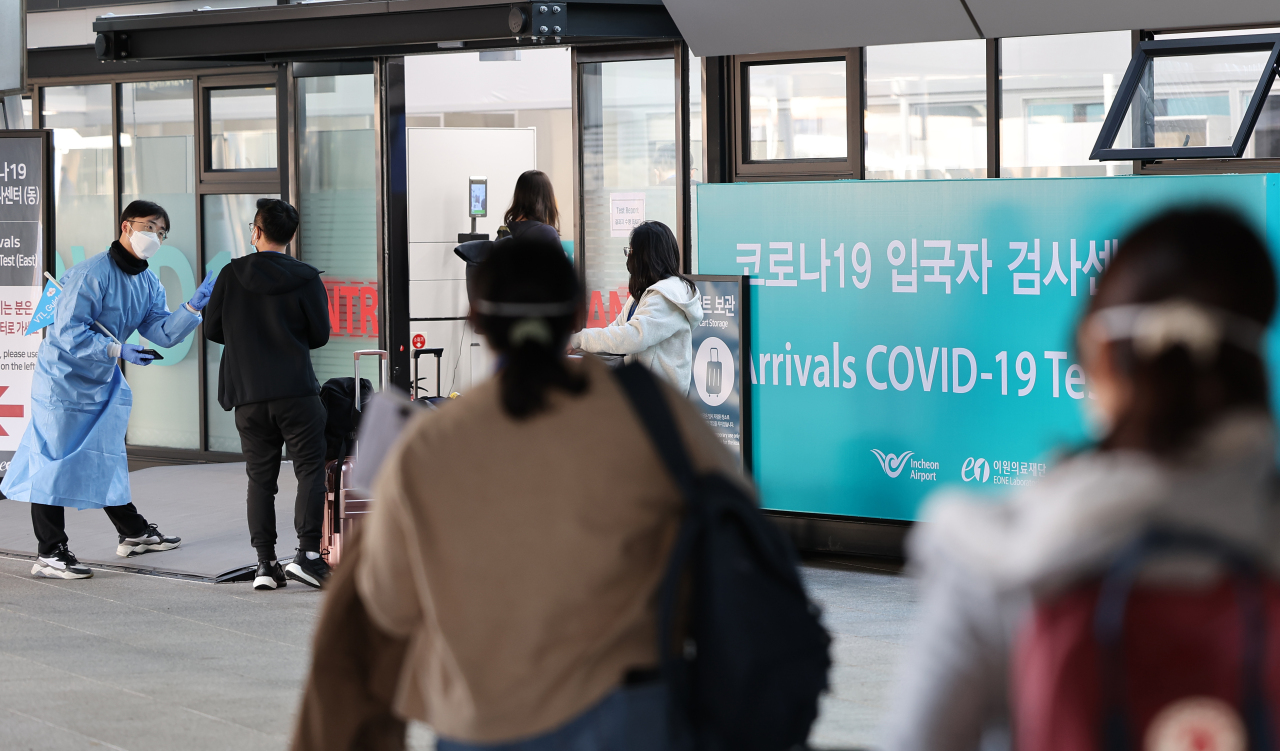 Passengers arrive at the Incheon International Airport on Monday. (Yonhap)

Omicron has risen to dominance all across South Korea about eight weeks since its discovery here.

The Korea Disease Control and Prevention Agency reported Monday that omicron has displaced delta as the dominant COVID-19 variant, representing slightly over 50 percent of sequenced positive samples for the prior seven days.

The agency said based on the latest metrics the risk level for COVID-19 was “very high” in Seoul and the rest of the country alike. In the previous 24 hours to Monday midnight, 7,513 cases were newly recorded, nearly double the 3,857 cases found a week ago over the same period.

On Monday, the Ministry of Health and Welfare said it was extending remote work to about a third of its workforce after identifying an outbreak. At least 24 tested positive so far, two of whom were on COVID-19 response duty. Contact tracing is still underway, the ministry said.

In a written briefing Monday afternoon, President Moon Jae-in called on health officials to “make a swift switch toward the omicron strategy” which entails limiting access to health care resources to high-priority populations. But the Health Ministry says it’s best to test waters before making that jump.

The omicron strategy marks a departure from the rigorous 3T -- test, trace and treat -- regimen.

PCR testing is offered to older adults in their 60s and up and those who have been in close contact with confirmed patients while the rest take at-home rapid antigen tests. In the case of any exposure, people will contact trace themselves through a smartphone app.

Health Ministry spokesperson Son Young-rae told reporters in a closed-door briefing Monday morning that the omicron strategy “may compromise our abilities to spot and manage patients.”

“So before easing controls, there are a lot of preparations that are still needed,” he said.

“The point of transition to the new strategy is still under discussion,” he said. “We have to consider not only case rates, but other metrics like intensive care bed occupancy and testing capacities.”

The omicron strategy is “about focusing the resources on people who are at increased risk,” he said.


Hospitals to be able to withstand bigger surge

The Health Ministry spokesperson said based on the previously dominant delta variant’s hospitalization rates, the health system could handle around 14,000 cases a day without becoming overwhelmed.

While government models project up to 20,000 cases a day by next month, Son said omicron’s reduced severity compared to delta will “allow hospitals to be able to handle far more cases.”

Son said based on information available so far, omicron’s severity is estimated to be about one-fifth that of delta.

Son said that at the moment both testing and treatment capacities are “very high.”

Since the recent surge following the Nov. 1 reopening left hospitals scrambling, thousands of beds for patients with varying degrees of COVID-19 severity have been added, he said. According to the ministry’s Jan. 19 count, hospitals nationwide have 2,047 ICU beds and 2,368 semi-ICU beds for COVID-19 patients in total.


Curbs to be ‘last resort’

Social distancing restrictions will be reintroduced “only as a last resort,” Son said. He explained that as omicron is less severe than delta, hospitals will be given more room to cope with the looming surge.

The majority of patients will recover at home, with their medical needs being taken care of at clinics in the community, he said.

“Clinics will take center stage in the COVID-19 response rather than hospitals, as it has been so far. With that transition, we will be able to withstand larger numbers of patients. The aim is to avoid tightening restrictions as much as possible,” he said.

In addition to the priority-based testing, already adopted in parts of the country with high omicron rates, other changes are forthcoming with changing science on the disease.

Based on omicron’s shorter incubation period, Korea is cutting the mandatory isolation for patients with confirmed infection to seven days if they are vaccinated. But patients who are unvaccinated will need to isolate for a full 10 days.

People living in the same household as a patient recovering at home with an active infection quarantine for seven days if they are fully vaccinated, and 14 days if not.

Fully vaccinated is defined as 14 days after a booster dose or no more than 90 days since an initial vaccine series.