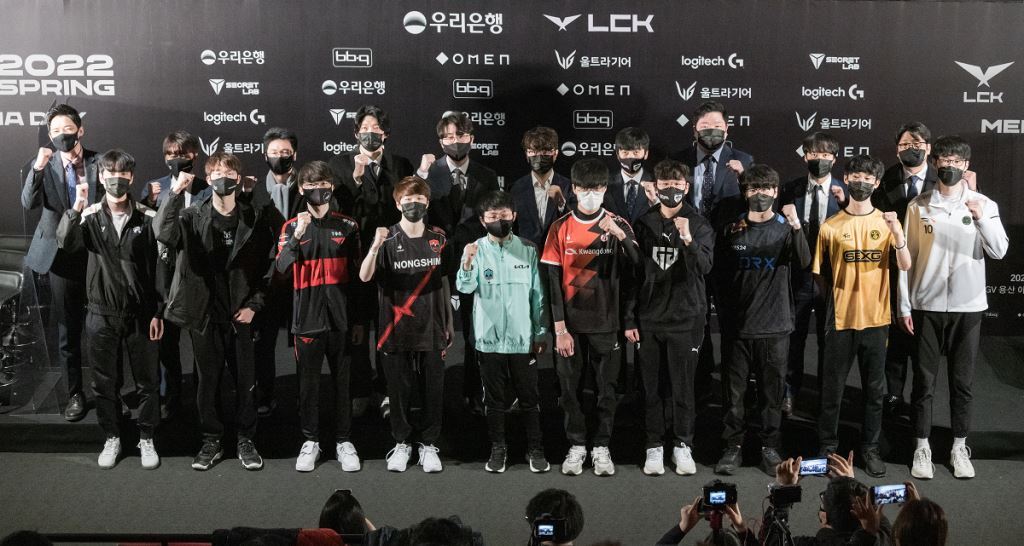 Coaches and players of 10 LCK teams pose for photos after a press conference held at CGV Yongsan, central Seoul, Wednesday. (LCK)
Attempting to excite fans and elevate the level of play in League of Legends Champions Korea, one of the changes for this year’s upcoming season is the reopening of LOL Park for fans, audience and spectators, said the secretary general of LCK Aiden Lee in a press conference at CGV Yongsan, central Seoul, Wednesday.

The call-up and send down period has been shortened from two weeks to a week this season, in the hopes that teams will more strategically manage their rosters.

When asked about the tournament’s favorite, coaches and players expected that T1 and Gen.G will be the strongest contenders for LCK Spring title.

Both coach Yang “Daeny” Dae-in and Choi “Polt” Seong-hun picked each other as the teams with highest chance of winning the season, highlighting the strength of each team’s roster which have seen little change in the off-season.

The teams that are considered weak in terms of player experience and performance are ready to change their images and aim to qualify for the season’s playoff, hoping to be in a favorable position for the 2022 World Championship.

DRX and Liiv Sandbox, who are playing in the opening match of the season, showed their confidence and hoped to start with a victory.

“Though the opening match is only a single game in an entire season, it holds a special meaning. We will prepare well to make a good performance,” DRX coach Kim “Kim” Jeong-soo told the Korea Herald.

Livv Sandbox coach Kim “Micro” Mok-kyoung said that he will face the season with an attitude of learning about the strengths of his opponents. The coach hoped to achieve the team’s first victory in the opening match as well.