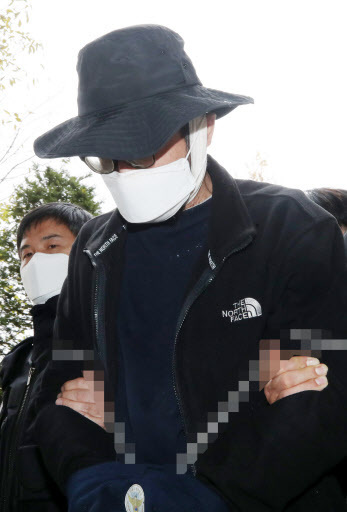 A suspect in the Incheon family stabbing is transferred to the Incheon District Court for his arrest warrant hearing on Nov. 17. (Yonhap)
A police officer accused of fleeing a crime scene and leaving two victims alone with a knife-wielding attacker in Incheon last month has been dismissed, police said Wednesday.

The punishment, decided at a disciplinary committee held a day earlier, is the second most severe that can be handed down to a public servant, after removal with pension stripped from the person.

The fired officer was a 20-something woman with about six months on the job. She was dispatched to the scene on Nov. 15 along with a more experienced male officer, who was outside the building when the violence occurred.

The male officer with a 19-year career also was dismissed Tuesday by the disciplinary board. He was also accused of dereliction of duty. He was talking with a family member of the victims when they both heard screaming and calls for help. Only the civilian rushed in. It was also this man who knocked the attacker unconscious after a bloody confrontation unarmed.

The case was widely discussed as an example of the police’s inability to actually “fight” crime, prompting the government to reinstate combat training for the police workforce, including on the use of a stun gun and other weapons.