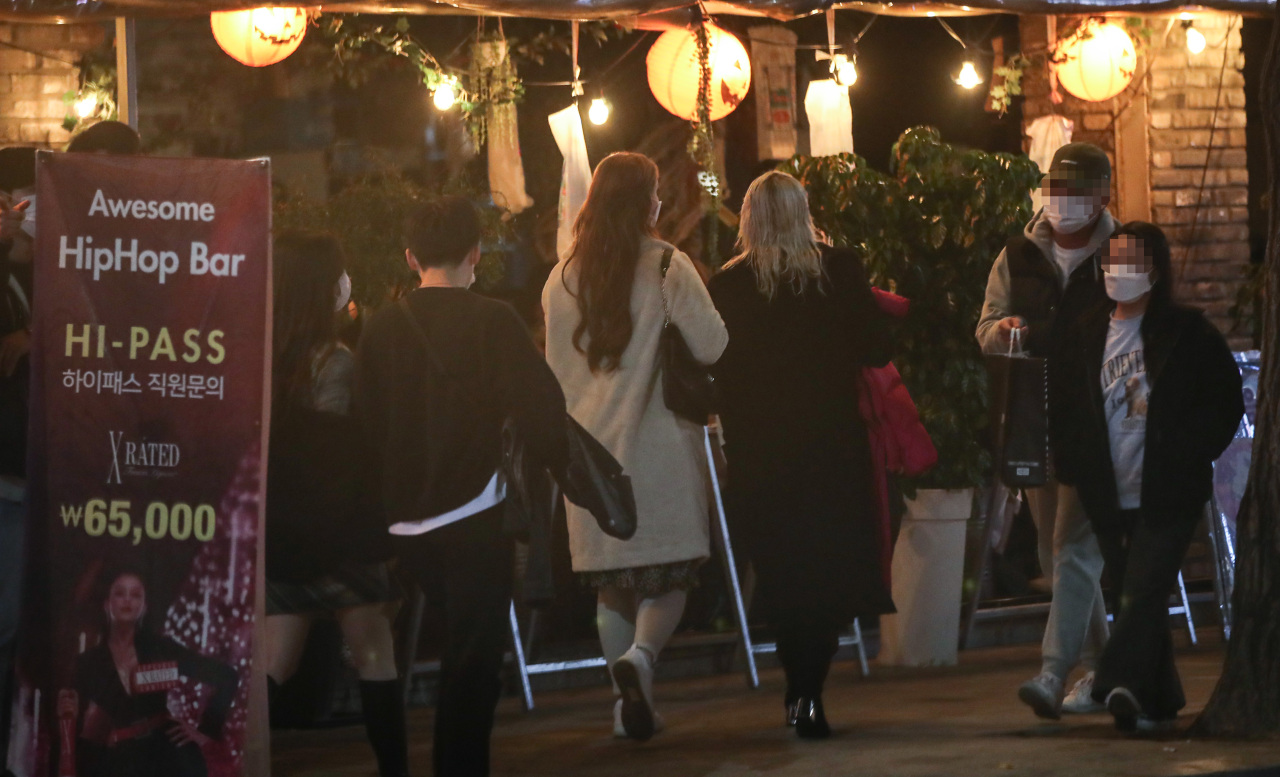 A street in Hongdae, one of the busiest entertainment districts in Seoul, is crowded with people on Monday, as South Korea seeks to gradually ease COVID-19 restrictions and return to normalcy. (Yonhap)
South Korea's new COVID-19 cases stayed below 1,500 for the third consecutive day Tuesday, less than a week to go before the beginning of a gradual return to normal life with eased social distancing rules.

The country added 1,266 more COVID-19 cases, including 1,246 local infections, raising the total caseload to 354,355, according to the Korea Disease Control and Prevention Agency (KDCA).

The latest tally inched up from 1,190 new cases reported the previous day, though it remained under 1,500 for the third straight day and below 2,000 for the 18th day in a row.

The daily infection count has stayed in the quadruple digits since July 7. But the number has been on the decline, albeit fluctuating, since hitting the peak of 3,272 cases on Sept. 25.

The agency said 40.84 million people, or 79.5 percent of the country's 52 million population, have received their first shots of COVID-19 vaccines since February when the country began its inoculation campaign. The number of fully vaccinated people reached 36.42 million, or 70.9 percent.

Based on the high vaccination rate and stable containment, the government decided to ease long-enforced strict antivirus restrictions in phases starting next month, and to focus more on preventing severe cases and deaths by regarding COVID-19 as an infectious respiratory disease, like seasonal influenza.

According to the first draft of the three-stage "living with COVID-19" scheme unveiled Monday, the government will lift most pandemic restrictions on business hours and capacity, and increase incentives for the fully vaccinated, though some quarantine measures, including an indoor mask-wearing rule, will remain in place.

Cafes, restaurants and other multiuse facilities will be allowed to operate around the clock, and private gatherings of up to 10 people, regardless of vaccination, will be possible until the second phase, with the ceiling to be completely removed under the third phase.

The government will also introduce the "vaccine pass" system, which requires a vaccination certificate or a negative test result for entry into multiuse and high-risk facilities.

South Korea reported 20 imported cases, raising the cumulated number of such cases to 15,003.

The number of patients with serious symptoms reached 344 across the country, up 12 from the previous day.

The total number of people released from quarantine after making full recoveries came to 327,592, up 3,144 from a day earlier, the KDCA said. (Yonhap)