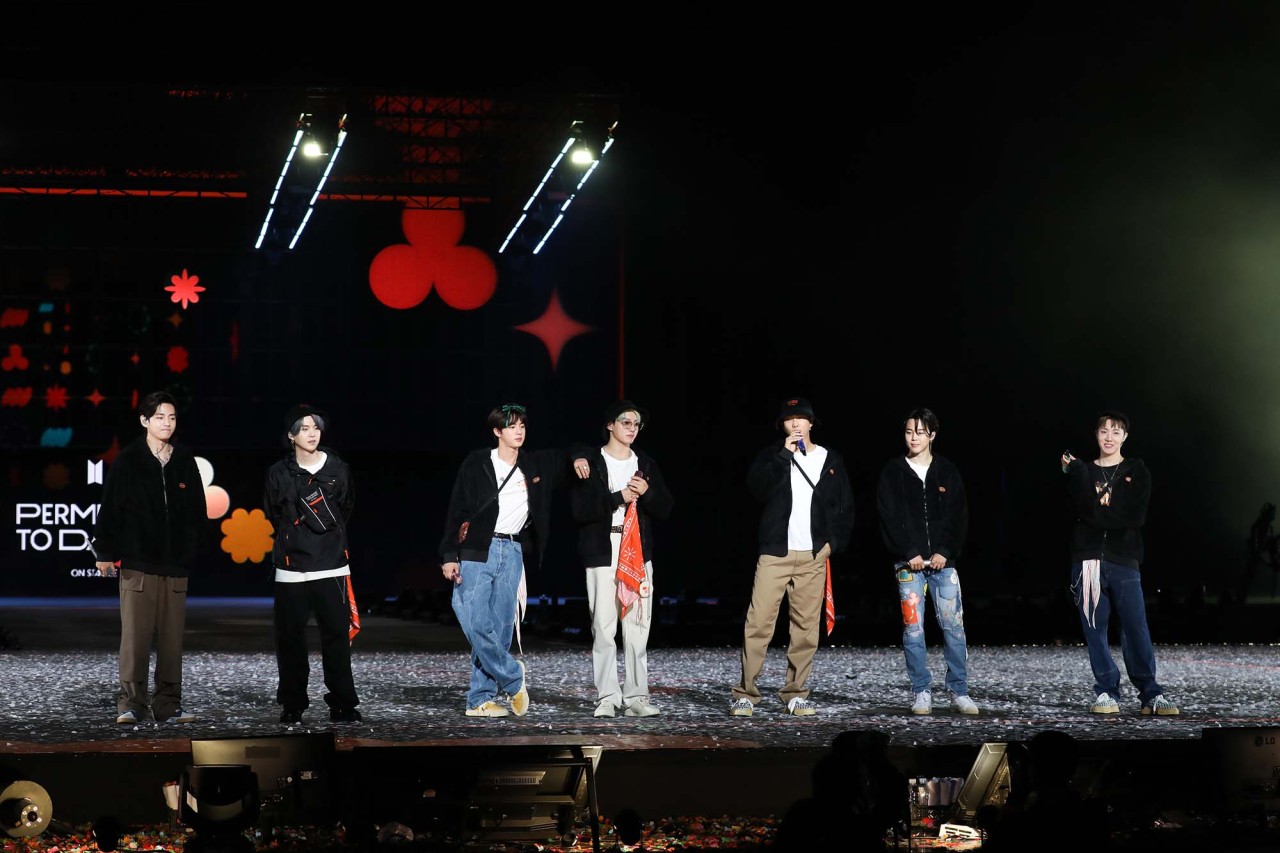 “BTS Permission To Dance On Stage” takes place in Seoul on Sunday. (Big Hit Music)
Over the past year, global K-pop sensation BTS‘ virtual concerts have showcased impressive technological innovation, creative renditions of the group’s biggest hits and elaborate productions, but for Sunday’s livestreamed gig, the septet took time to return to the basics of a traditional concert.

“BTS Permission To Dance On Stage,” kicked off at 6:30 p.m. on Sunday at Jamsil Olympic Stadium in Seoul, the exact location where the group had held their last concert in the presence of fans in October 2019, before the global outbreak of COVID-19 a few months later.

Although big on the screens through which the fans were watching, the seven bandmates’ presence on the massive stage inside the empty 70,000-seat stadium felt smaller than ever. The members themselves felt it even more so as their previous two online concerts last year -- “Bang Bang Con” in June and “BTS Map of the Soul: ON:E” in October -- had taken place inside closed-door venues, decked-out multi-staged studios where they had to run back and forth endlessly throughout the concert.

“I feel my emotions draining looking at those empty seats. I’m reminded a lot of last time we saw you guys here at the Olympic Stadium two years ago, before the outbreak. I’m constantly reminded of how different it is now from then. I miss the old times,” member J-Hope said during the concert. 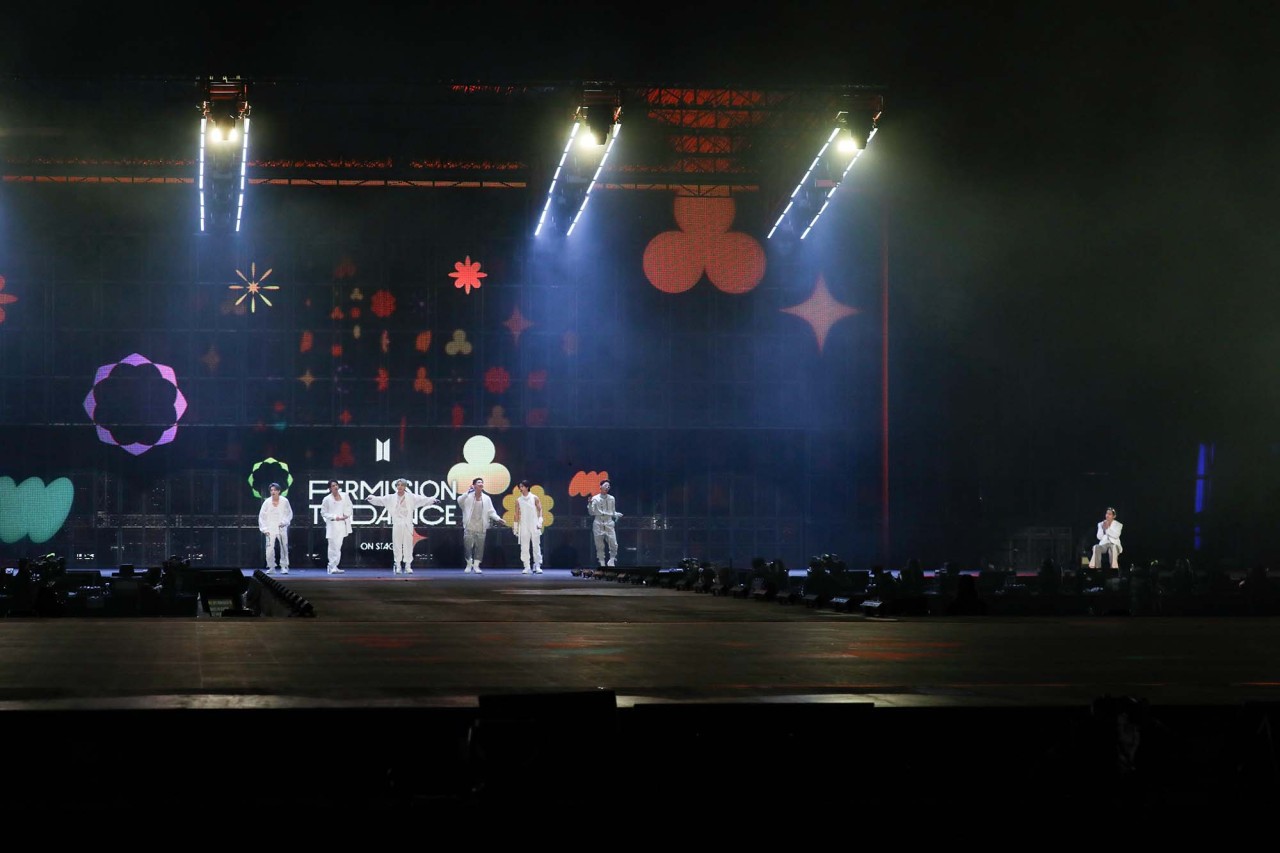 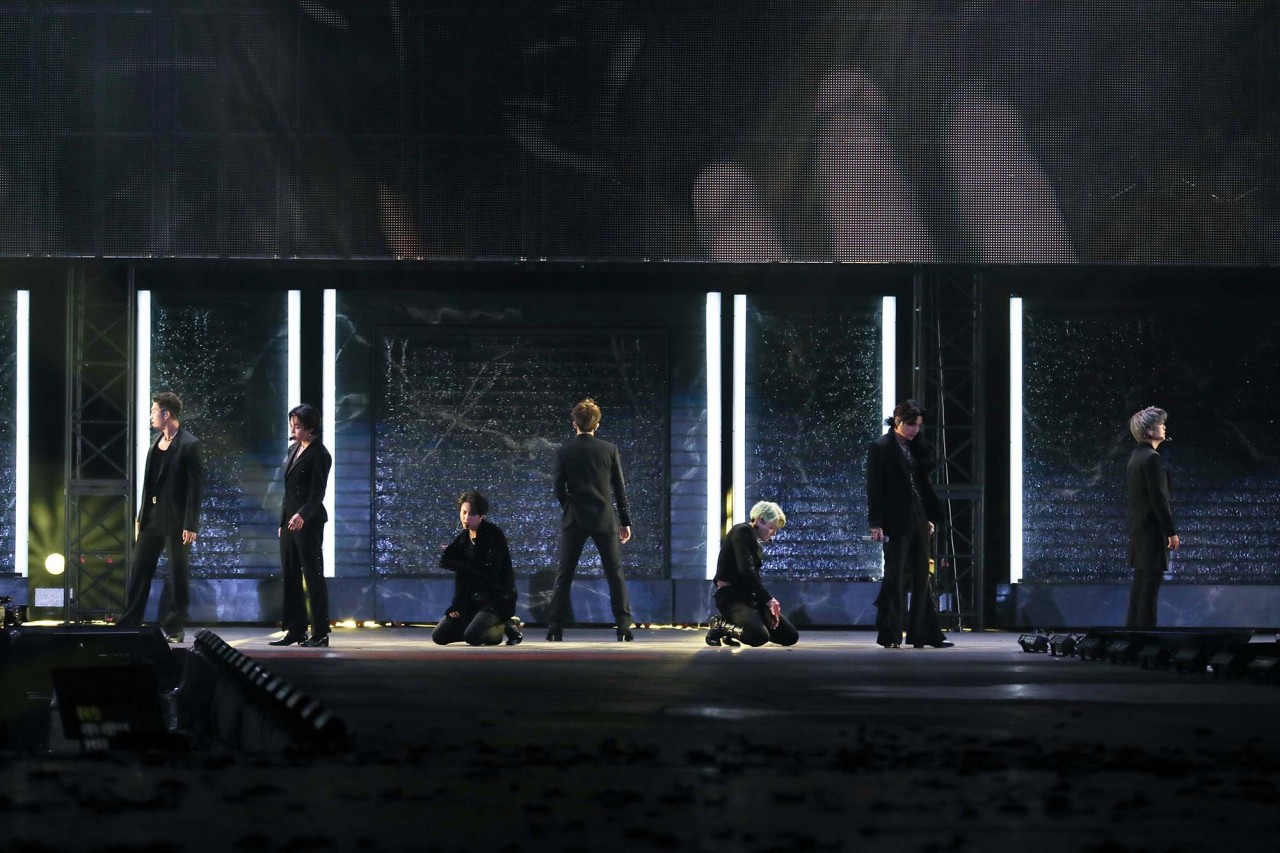 “BTS Permission To Dance On Stage” takes place in Seoul on Sunday. (Big Hit Music)
Kicking off the show with “ON,” BTS heated up the stage with some of their timeless hits, “FIRE,” “DOPE,” “DNA” and “Blood Sweat & Tears.”

“ARMYs in the world, are you listening?” RM shouted out to the group’s devoted fan base. “Literally long time no see. Nice to meet you, not face-to-face, but it’s alright. Let’s make it a party today. Let’s go!” Screams of fans coming from the speakers surrounding the walls of the stadium followed.

V, who sat out of the performances due to a leg injury, joined the show from a seat at the corner of the stage, singing and moving his upper body to the flow of music. 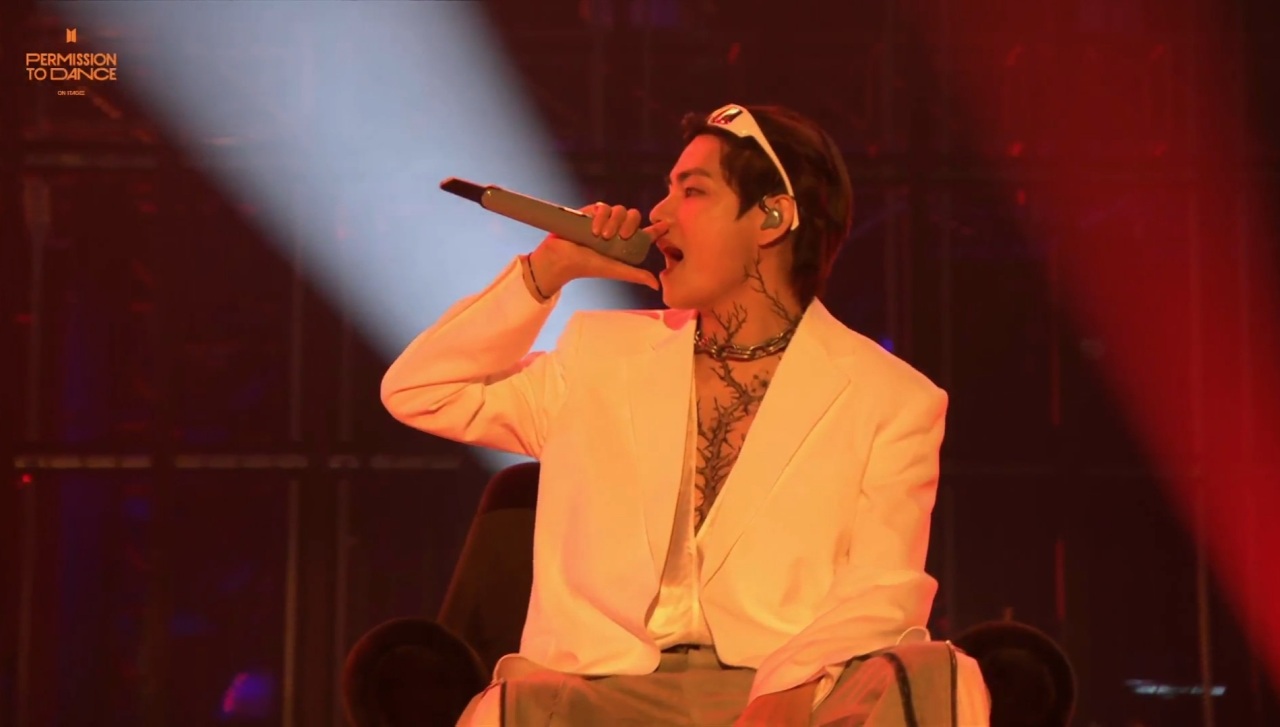 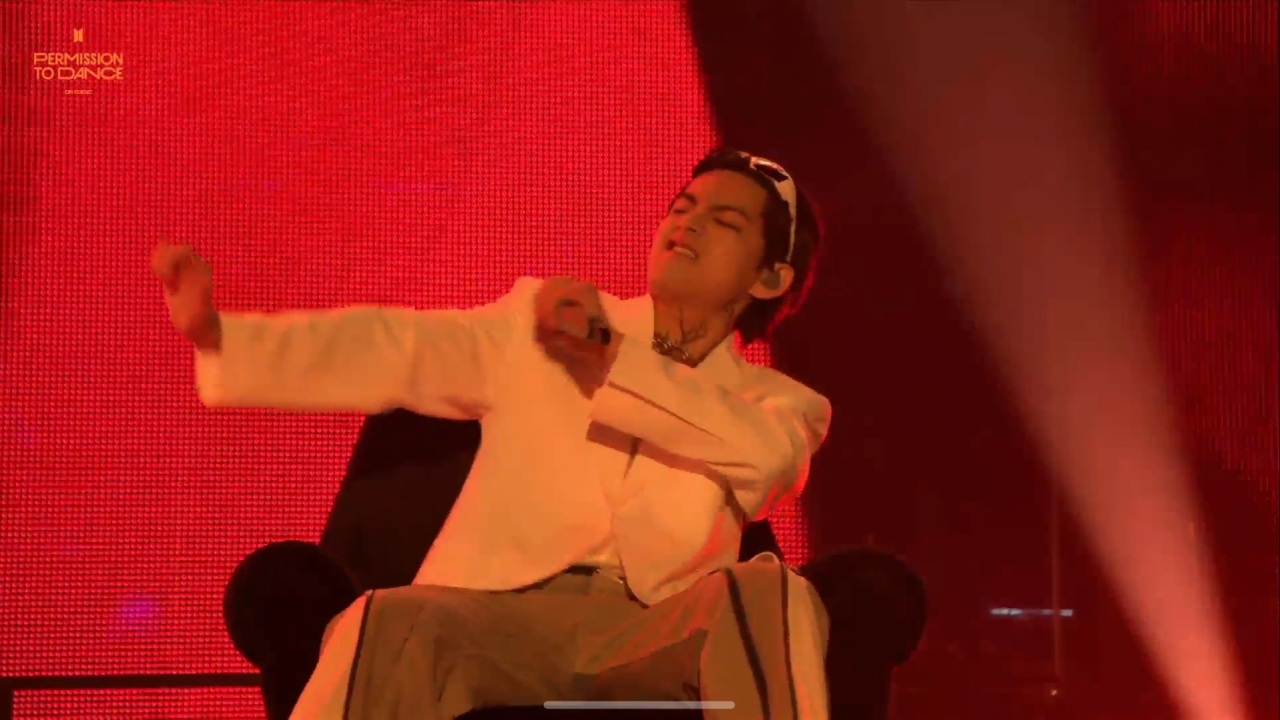 “BTS Permission To Dance On Stage” takes place in Seoul on Sunday. (Big Hit Music)
The members, now eight years into their career, boasted a relaxed and cheerful demeanor on stage, making a perfect harmony among the seven, even as V sat at a distance from the others.

With his hair dyed a bright mint color, Jungkook said, “I recently did my own small gig during a livestream, and I really enjoyed it. But standing here with all the other members, it’s way more fun.“

Backing up the members during performances of “Black Swan” and “Fake Love” was a massive LED screen installed on the stage, the biggest the group has ever used, and a 4K/HD multiview screening option that allowed fans to choose from six different angles. Sunday’s concert also incorporated the Visual Effect View (VEV) for the first time, an option that adds a vivid layer of visual effects -- such as lyrics and commentary graphics.

The loud screams generated by frenzied fans behind the screens echoed through the stadium and blinking light-bulb sticks placed among the seats beamed now and then, as if reminding the seven members that this was a real-life concert. 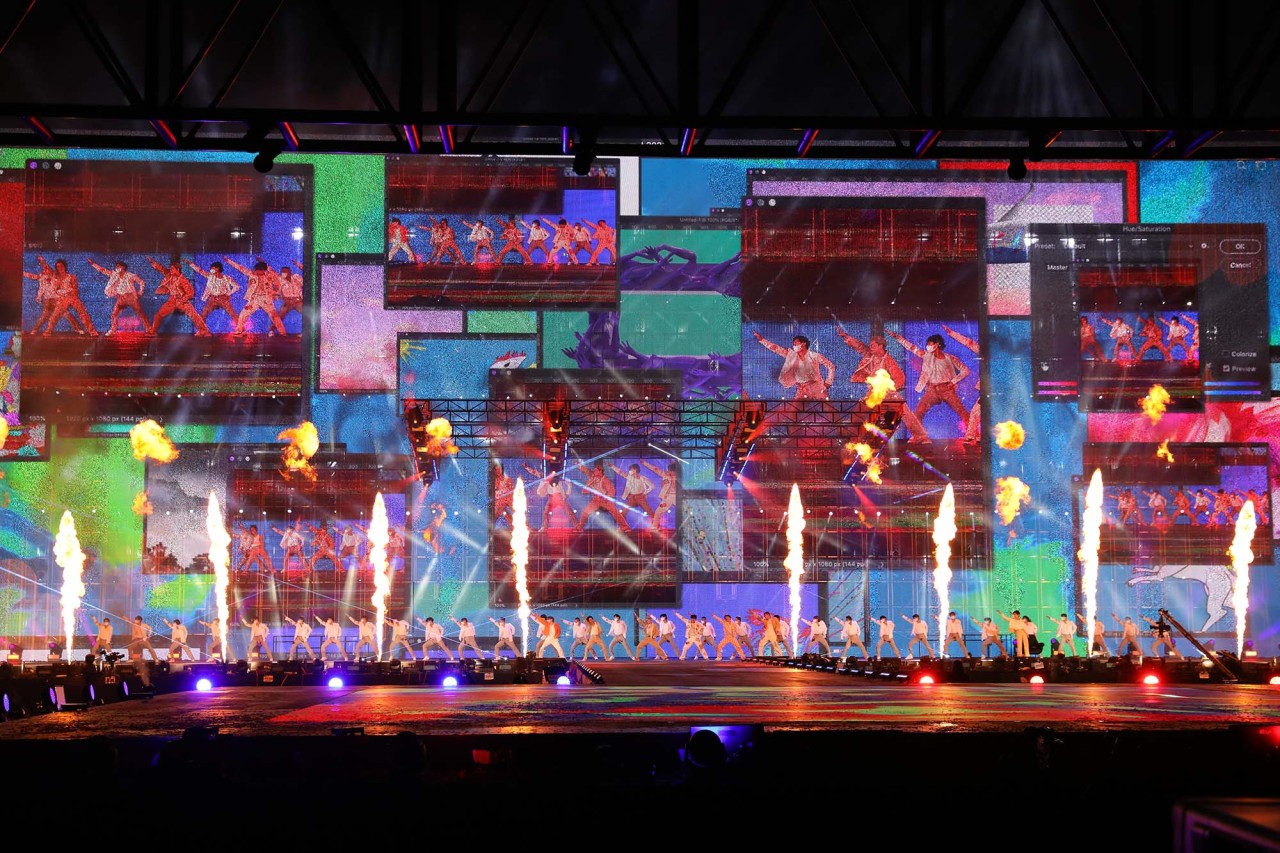 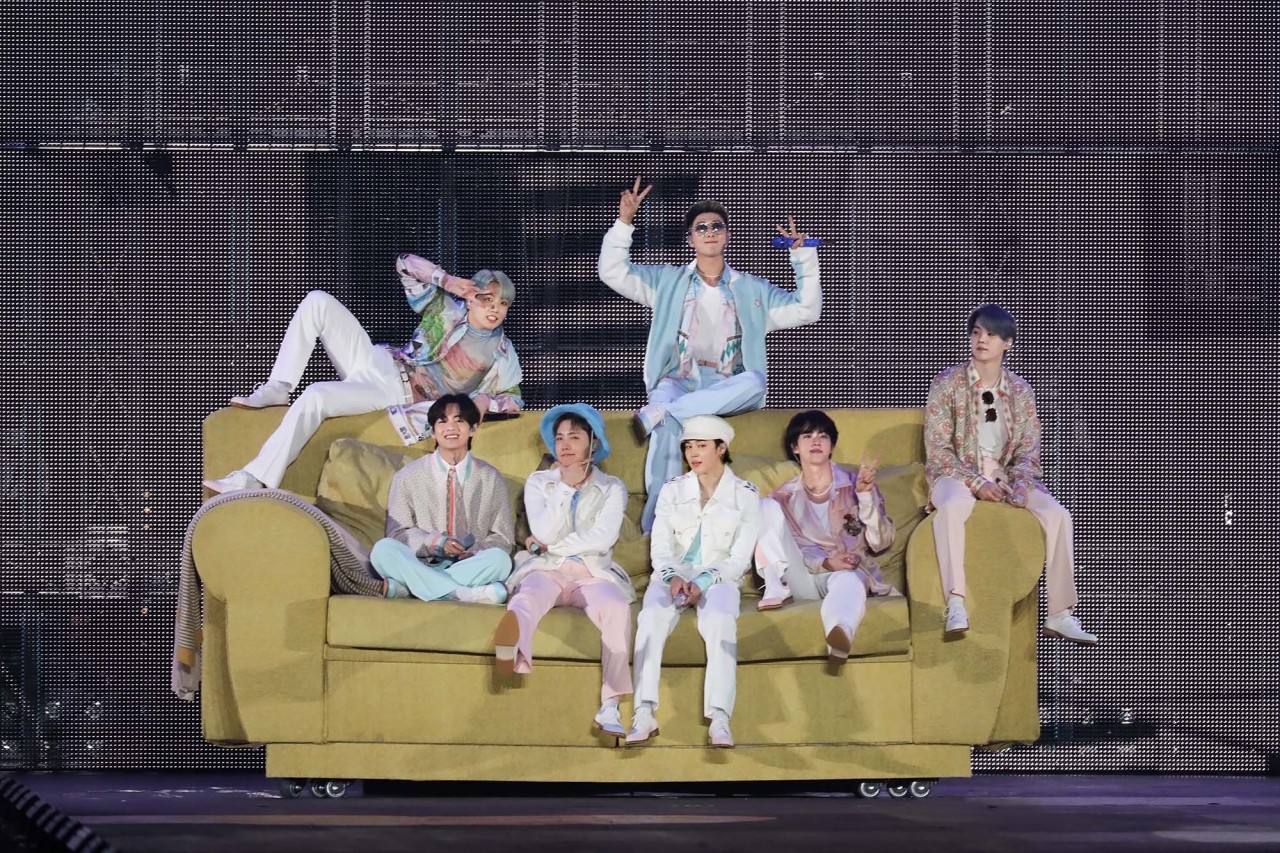 “BTS Permission To Dance On Stage” takes place in Seoul on Sunday. (Big Hit Music)
For the band remix of “Life Goes On,” specially arranged for Sunday’s concert, V joined the others on the bed installed on the stage, reenacting the scenes from the song’s music video. “Boy With Luv” and “Dynamite” were also rearranged into remixes for the night.

The online concert is not only the first of the septet’s new gig series, “BTS Permission To Dance On Stage,” but also marked the group’s return to normal. BTS has four concert dates confirmed in Los Angeles in November and December, the first they are attempting since the outbreak of COVID-19.

As if preparing to take a big jump forward, the seven bandmates performed the entire 150-minute show together, with no unit or solo sessions.

“We made today’s concert with a setlist made up of just the seven of us. It was a huge challenge, and we faced adversities, such as how we would maintain our energy until the end,” J-Hope said, adding, “We really ground ourselves, our souls into making ‘PTD On Stage.’ We’re grateful to all the fans watching us here tonight.”

The climax of the show was “Spring Day,” as members crooned the nostalgic lyrics which sing of a heart longing for a spring day when those who are no longer together can meet again.

“I almost cried as I saw the empty stadium singing ‘Spring Day.’ You guys have overcome a hard time, and so have we and we’ve grown up so I didn’t actually cry. But I suppose I would have if ARMYs had been here. I’ve missed you guys so much,“ Jungkook said.

“My motto is ‘Rather die than to live without passion,’ but recently I’ve been feeling the embers faltering inside me, soulless, whatever I did. Standing here, on stage where ARMYs are watching from far away, it was my first time actually grasping that I’d lost my zeal. I realized that, with this stage as the start, I needed to see you guys more.” 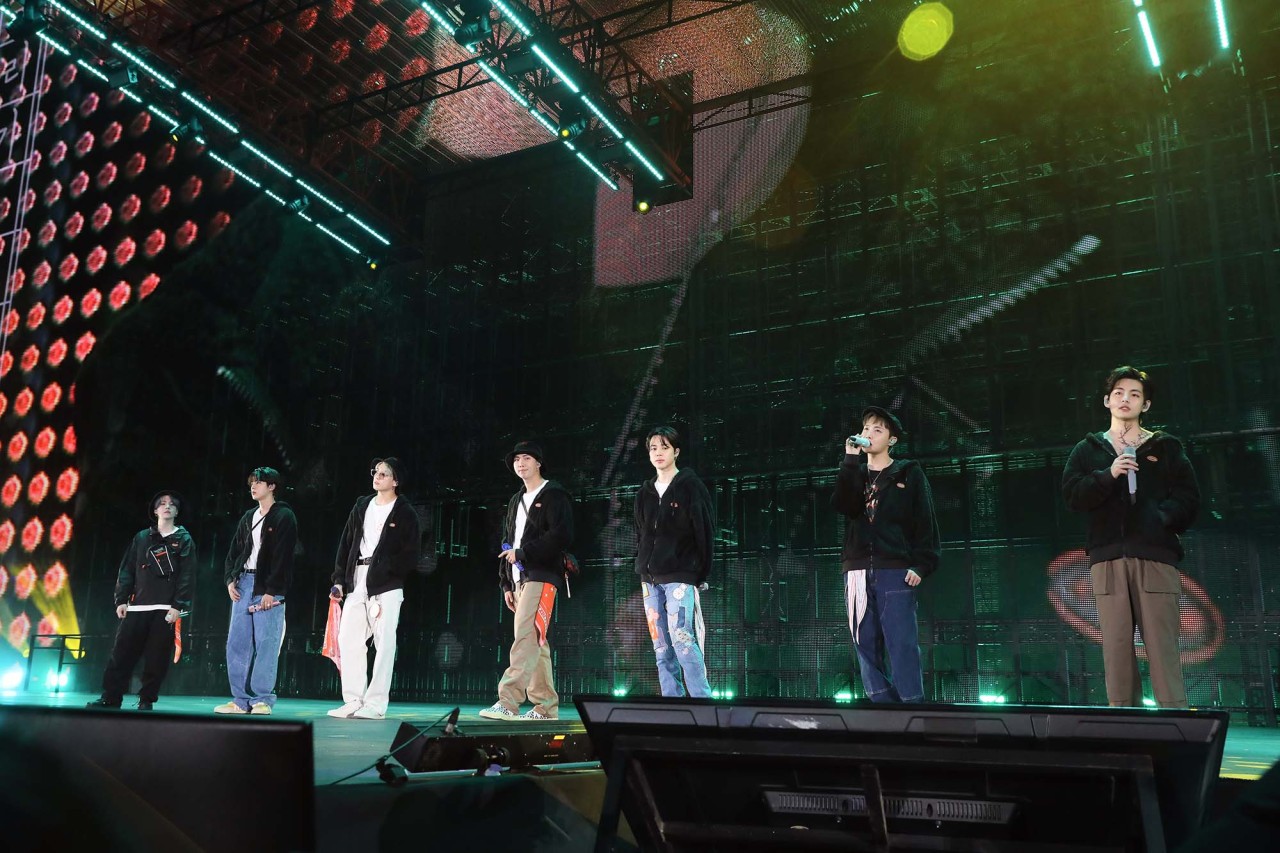 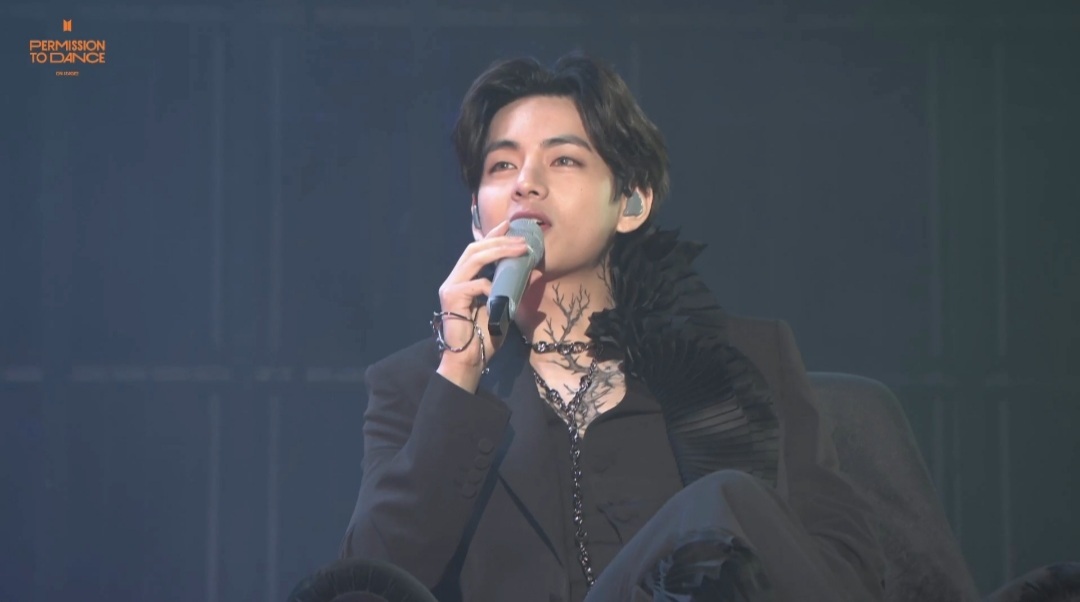 “BTS Permission To Dance On Stage” takes place in Seoul on Sunday. (Big Hit Music)
Just like Jungkook, the bandmates put down their title as a global K-pop sensation and connected with their fans as fellow humans who were just coping through their own dark days.

“I actually went out of tune today, and I’m really disappointed at myself for that. I used to be able to hold concerts like this when we were on tour, but now that it’s been so long, it’s hard to keep up with all the excitement,” Jin, the eldest in the group, said. Jin is scheduled to enlist for his mandatory military service soon as he turns thirty next year.

“Turning thirty, it hurts here and there now, and I really want to hold more concerts before I become too old and it becomes hard to keep up the energy as before,” he said jokingly, adding, “With the LA concert as the start, we’ll find more chances to meet you guys.”

Jimin, usually one to burst out crying during to concerts, made his comments short, as if trying to hold back his tears. “You guys know how big this Olympic Stadium is, and without anyone here, it feels half like doing a rehearsal. It’s becoming more difficult to think of what to say now that I’ve said so much without you guys here. But I feel we’re gonna meet soon, so let’s talk more then.”

Although disheartened from his unexpected leg injury, which happened during rehearsal according the group’s label Big Hig Music, V promised to be more hopeful.

”I’ve been excited about how I will dye my hair and what tattoos I’ll do for the concert, but I’m here like this now. I’ll take proper care of my body and mind and promise to show what I couldn’t tonight in our next tour,” V said. 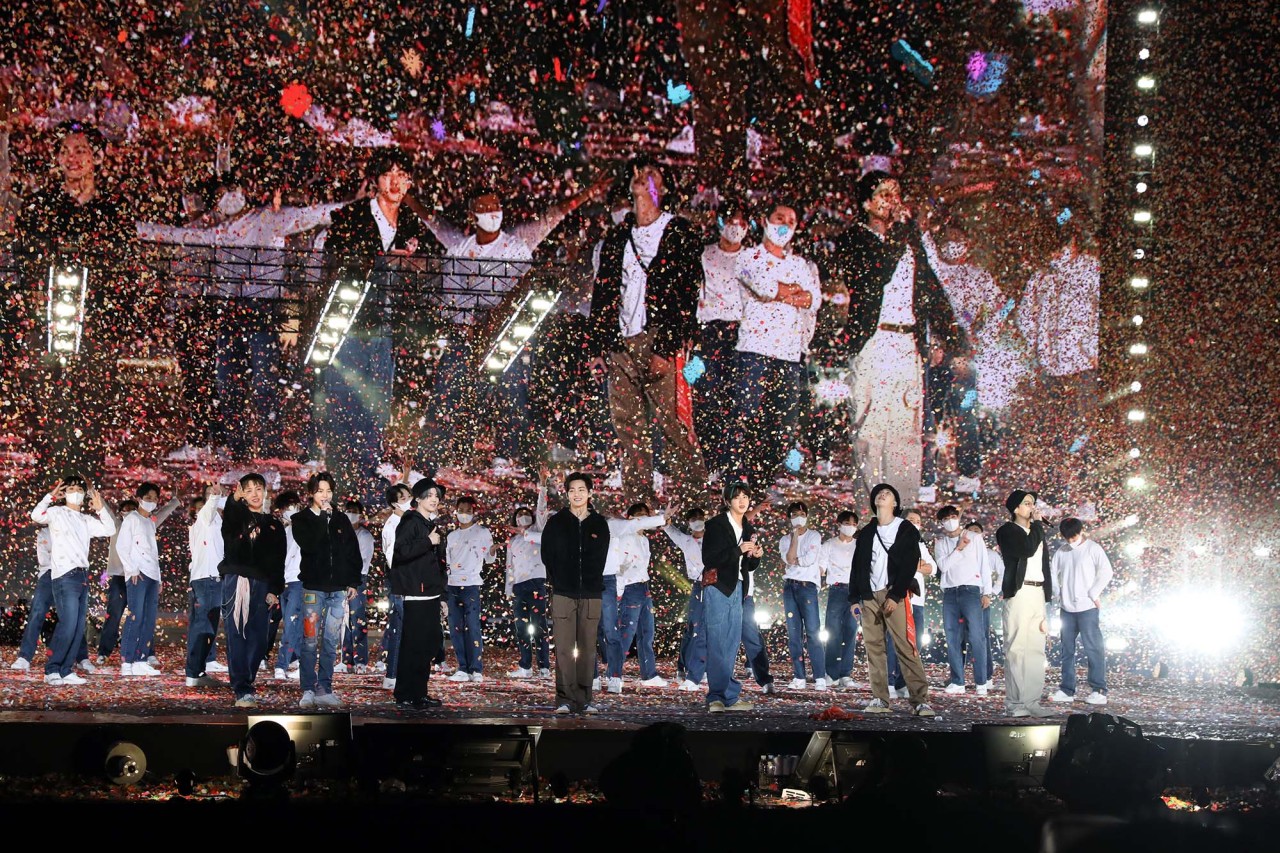 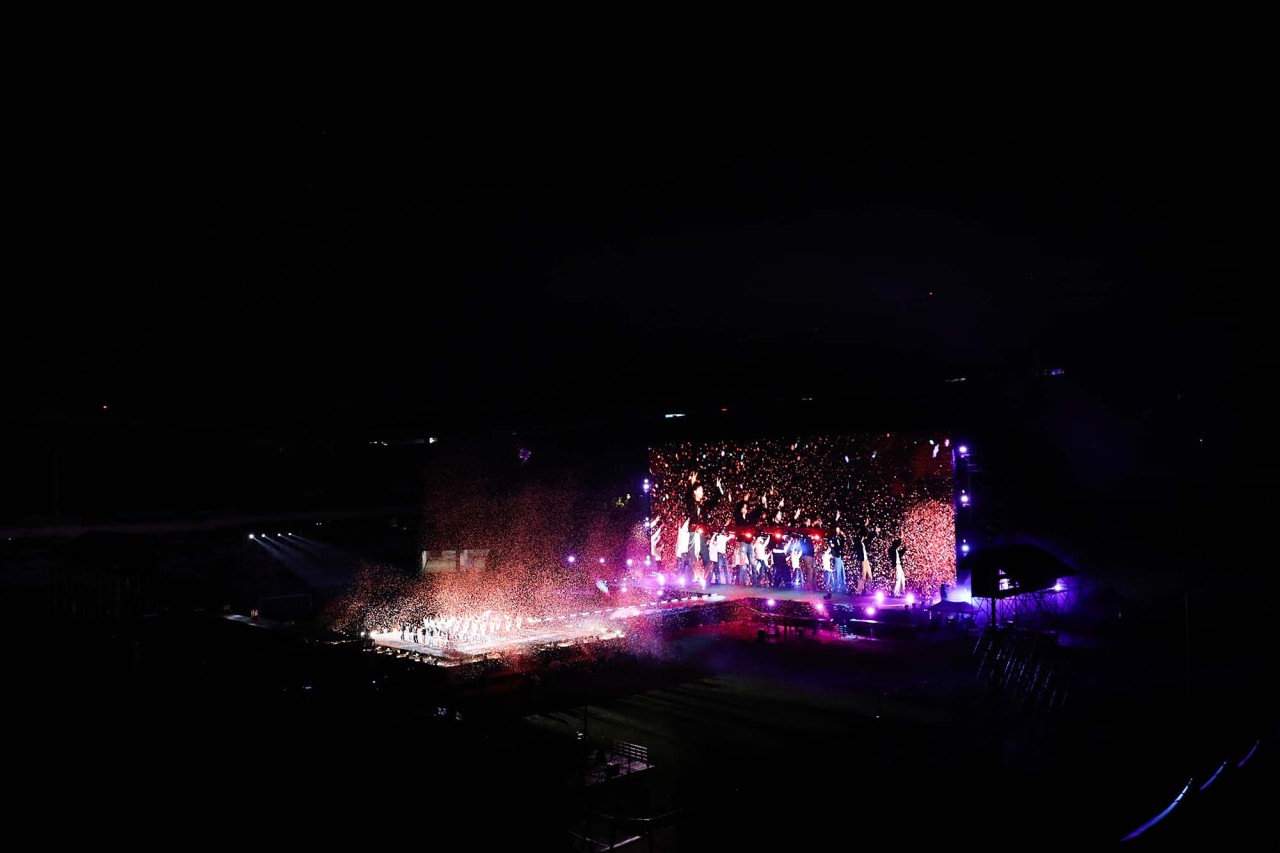 “BTS Permission To Dance On Stage” takes place in Seoul on Sunday. (Big Hit Music)
But embracing their vulnerabilities and connecting with the fans through their biggest passion, the members overcame their limits and found hope.

“I’d forgotten how I was supposed to do a concert, and so I looked up our (“Speak Yourself” tour) final concert, and it all felt like a dream -- this whole place packed with no one wearing masks. Although it wasn’t easy to complete the performances with all of us together, it hit me that we’ll be able to reunite with you guys here at the stadium next time,” Suga said.

“After two years, I felt myself becoming deprived of motivation. As an individual and as a member of BTS, I need the drive to continue. Everyone is facing the same situation around the globe, so I tried to make efforts to overcome the time by working out more and trying new hobbies, but I really felt like I’d hit my limits recently, unable to remember who I was and what I’d done before,” RM said, his expression dark.

“So I’d really looked forward to tonight, because I knew I’d be able to remember if I hold the concert here where I’d performed in front of 50,000 people. Although V had to sit out and you guys aren’t here, I realize I won’t need any motivation if I could just hold concerts. I just need to see you, connect and dance.”

With “Permission to Dance” as the finale, resonating RM’s message that we don’t need anything but just to dance and enjoy ourselves, the concert came to a close.

BTS will hold four concerts with an audience at the SoFi Stadium in LA on Nov. 27-28 and Dec. 1-2, and the final concert will be livestreamed simultaneously online.