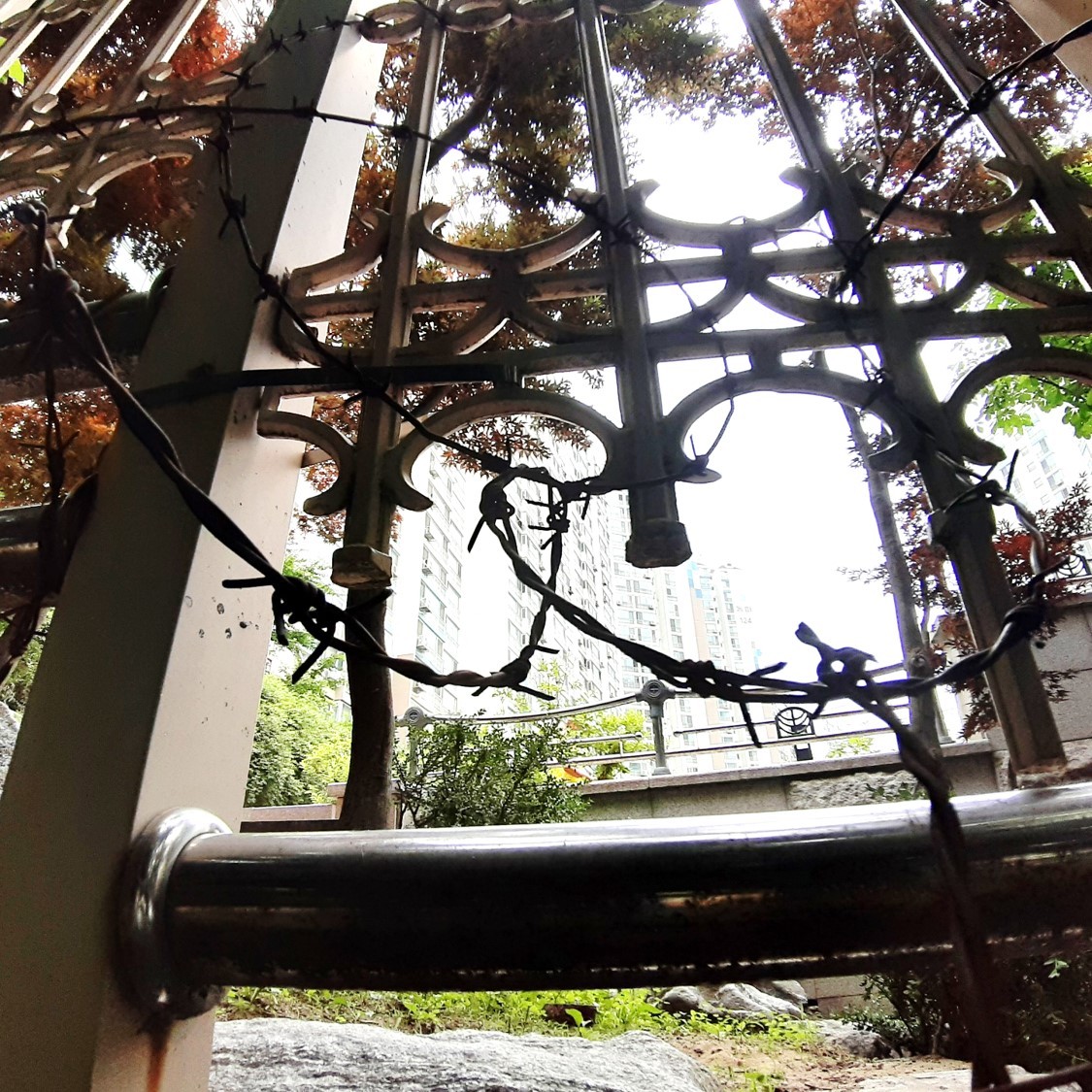 Now, they live side by side with little interaction.

“In the very beginning, there was no barbed wire and we came and went. And they didn’t like (us going in their areas). They said it would lower their housing prices,” said Kim Choon-ja, 68, who has lived in a subsidized apartment within the complex for more than a decade.

The haves, as she called them, live in apartments that cost between 700 million won ($600,000) and 1 billion won, about average in the city, while people like Kim rent their units for less than 500,000 won a month.

Public rental apartments -- housing provided by the state to low-income families -- help many people cope in a city with notoriously expensive housing prices, but they have also brought to the surface society’s hatred of people living in poverty.

“People here have lower education levels, and some of them did not learn manners. Many used to live a rough life. The men worked as construction workers, and the women also worked at (construction) sites,” said another resident, Yoo Deock-sin, 68.

“So some can be a bit foul-mouthed and look shabby. The people over there don’t like to see that.”

Dozens of residents the reporter met in the public housing section of the complex did not take issue with the fence but instead seemed resigned to its presence.

Although barbed wire is unusual in most areas of Seoul with public housing -- of which there are more than 1.7 million units nationwide -- public housing residents throughout the city still live with prejudice and discrimination.

The government’s plans to build more public housing face an intense backlash from nearby residents, who are concerned about “poor neighborhoods” and how they might affect the value of their own property.

According to the Anti-Corruption and Civil Rights Commission, 1,068 complaints were filed from May 2017 to June 2019 against rental housing construction. They accounted for 29.8 percent of all complaints related to rental housing.

Some residents of Seohyeon-dong -- part of Bundang in Seongnam, Gyeonggi Province -- protested the large-scale public housing plan with a banner comparing rental housing to “refugee villages.” “Public rental housing threatens the safety and security of residents,” read one pamphlet.

Humansia is one of several apartment complex brands that offer low-priced public rental units throughout South Korea. Some Koreans mockingly call Humansia tenants “Hugar,” a combination of Humansia and “beggar,” or “imgar,” from “beggar” and the Korean word “imdae” (rental). People living in villa apartments are called “vilgar.” Unlike in English, in Korean a villa refers to a building with fewer than four floors and with small, low-priced apartments.

Discrimination against and hatred of the poor are also affecting children, according to the nonprofit organization ChildFund Korea.

An official who works for the group but wanted to remain anonymous said, “When I was visiting a family (to offer support), I asked some children the location of the apartment building (where the family lives). I was told, ‘It’s a neighborhood where poor children live. Why are you looking for them?’”

The official said prejudice against the poor is so rampant in society that people use hate speech without a second thought.

Seo Jin-taek, a teacher at a large private academy, has seen children from rich families bully poor children, saying their moms told them not to play with people living in “Hugar.”

“What do children know? They just learn from their parents,” he said bitterly.

According to a survey, parents of elementary school children were more likely to have negative attitudes about public housing.

For mothers of elementary school children living in the affluent districts Gangnam-gu, Seocho-gu and Songpa-gu, the figure was just 37.5 percent.

Nam Ji-young, 40, whose son starts elementary school next year, admitted she understands the perspective of the concerned parents.

“I had no idea when I was single and even when my son was younger. Now, as my child is old enough to go school, my mind has changed.

“I want my son to mingle with kids living in a decent family. Poor kids are neglected because their parents are busy and are perhaps less educated. I just want my son to see good things. It is never late when he encounters bad things when he is grown up,” she said.

Hatred for poor is prevalent

Critics say hatred of the poor is somewhat unique to Korean culture.

“In other countries, hatred is more related to race or gender that is associated with an identity that one can’t change,” said social critic Park Gwon-il.

“Here, in addition to that, hatred is also related to hierarchical and socioeconomic factors. Korea is a sort of class-based society where ‘gab-eul’ culture is prevalent.”

Gab-eul in Korean refers to the hierarchical power dynamics between two people or groups. The person with more power is “gab,” and “eul” is the one who is subjugated. “Gapjil,” a phenomenon that is prevalent in all areas of Korean society, takes the form of arrogant or authoritarian attitudes or actions from people in positions of power.

“Through this gab-eul culture, we tend to tolerate people with money and power ignoring weak and poor people. This allows hate speech such as ‘vilgar’ or ‘Hugar’ to be updated periodically without being filtered and criticized.”

Shin Ho-chang, a professor at Sogang University’s communications college, warned of consequences for Korea if this loathing of the weak persists within the culture.

“We judge people based on social status, power, appearance and money rather than by looking at what is inside. Such judgment creates an invisible class and tolerates hatred of people who have less,” he said.

“Although this can’t be changed overnight as it has been historically accumulative, we should continue to be educated that a person is not determined by wealth but values and personalities. If we can’t overcome this culture, we will never become an advanced country.”

The concept of “us” is a strong force in Korean culture, and to be counted as “one of us” in any group comes with privileges big and small within its boundaries. However, for those who fall outside the boundaries of “normal,” life in Korea is riddled with hurdles and sometimes open hatred. In a series of articles, we take a closer look at the biases that exist in Korea, and the lives of those branded as “them” by mainstream society. -- Ed.